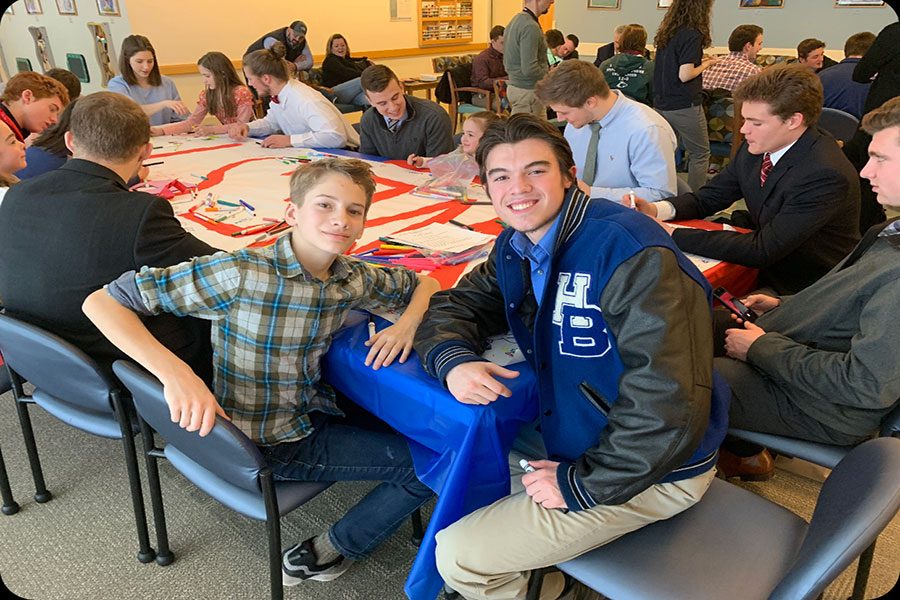 Gillespie sits with the other players and the children at the CHaD hospital. “We’re pretty much on the same page,” said Gillespie. They will be playing later this June after a week of practice.

Wide receiver and cornerback Michael Gillespie ‘19 is the first and only HB player to be picked for the CHaD football roster, which is an all-state game. Gillespie is ranked #23 in the state and is nationally ranked on MaxPreps, which is a national football and sports ranking website. He’ll be on the same team as Division 1 players from schools like Bedford, Nashua North and South, and both Manchester South and Central.

One of Gillespie’s most important traits is his incredible dedication. He could be found at every weight room session and every film room. Afterall, he knows that the most improvement can be made in the off-season when less dedicated players aren’t focused on the upcoming season. The football season is only two months, so the other ten present themselves for the most time for growth, according to Gillespie. These traits helped make him a four year varsity player, another factor that helped him get onto the roster.

“They choose based off talent and giving back to the community,” said Gillespie. In addition to football, he does hours of volunteering for local business, as well as working at the Milford General store as an associate, and for his father at his fish store, Aquatic Creations. Gillespie’s achievement to make the CHaD roster is particularly noteworthy, because as a Division 2 athlete, there’s an entire division of teams that that are better than HB, and are exposed to better competition. The difference between the prestige is “all state is based off just the division” while “this game is just anyone in the state,” said Gillespie.

The goal of the CHaD game is to raise money for children, which they attempt to do through the players. Gillespie has already received some donations from local residents and is looking for local businesses to sponsor him.

“I’m just here for fun,” said Gillespie. He understands that the game will be competitive but said “everyone is on the same page,” in the regards that they are playing for charity. Most of the players are seniors whose seasons are over, and don’t want to get injured. The charity is always looking for donations to help support their cause. By supporting a player you can help children in intensive pediatric care. Even buying tickets will help the charity, with the game slated for Saturday, June 29 at 6 PM, on the UNH football field.