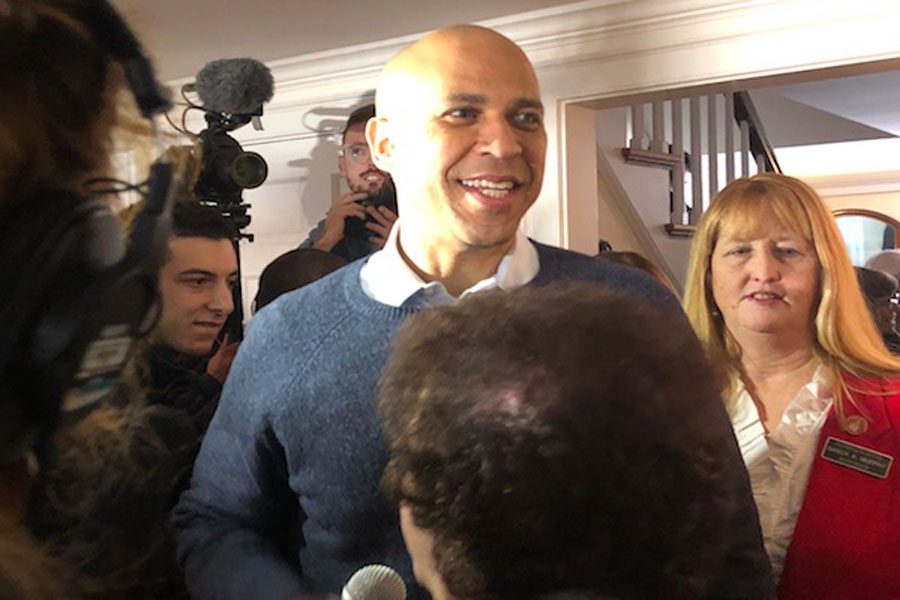 Booker delivered an impassioned speech to a room full of beaming New Hampshire citizens. In his speech, Booker speaks of his experience as a school teacher and his own struggles as a black man, providing alternative and relatable perspectives to his character as a New Jersey senator.

On Monday, February 20, Senator Cory Booker (NJ) kicked off his presidential campaign by attending a house party in Nashua, NH. The party was hosted by New Hampshire Senator Cindy Rosenwood and featured an inspirational speech by Booker describing the core values of his campaign.

The Democratic candidate announced his presidential campaign on February 1. He is basing his progressive campaign on a number of social issues, such as affirmative action and women’s reproductive rights, as well as justice reform and addressing climate change. With a campaign so left-leaning, Americans, including students at HBHS, have called Booker outspoken.

Despite these alleged contentious views, Booker is looking to cross party lines by emphasizing common American values. He cites his work with Governor Chris Christie, claiming he could “write a dissertation on [their] disagreements, but [they] found common ground.” He hopes to do the same on a national scale.

Booker spoke on these ideas in Senator Rosewood’s living room, speaking about how his upbringing influenced his political views, and how he plans on closing the rift between Democrats and Republicans throughout his potential presidency. He followed the speech with a Q&A.

Some of HB’s politically-involved students managed to attend the event. Jack Sinclair ‘19 was one of these students; he seemed to like what Booker had to say.

“I️ feel like he strikes a good balance between hardcore progressives and more moderate Democrats,” says Sinclair. “Which is exactly what the party needs going forwards.”

Zaki Quereshy ‘19, however, took issue with some of the things Booker said. He argued that Booker seemed somewhat ingenuine in both his speech and his responses in the Q&A.

“His rhetoric was laden with appeals and empty statements,” he says. “He often avoided answering hard questions that were posed to him.”

Nonetheless, Quereshy still found him to be “a man with a seemingly upstanding character and apparent care for his present and future constituents.”

After the Q&A, Booker’s management team rushed him out to the next stop on his campaign trail. The house party was only the beginning of what is sure to be a busy and complex trek across the nation towards presidency.