Beginning of the Madness 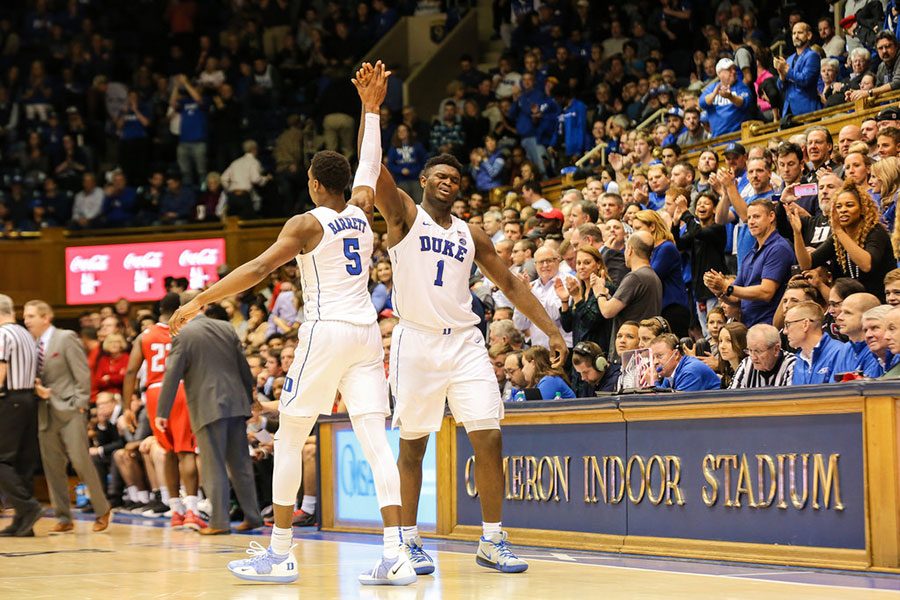 Pictured here are Duke’s superstars RJ Barrett and Zion Williamson. Duke is poised to make some noise in the tournament this year, with a star-studded lineup and a veteran coach. “Duke has a lot of talent and looks ready to win the tournament,” said Evan Simonds.

The month of March features one major sporting event, one that sports fans everywhere go crazy over. 64 college teams from schools all over the country, ranging in size from 5,000 kids to 50,000 kids, are all thrown into a six round bracket. This win or go home sporting event is called March Madness where college basketball teams play for their season.

Every March Madness features similar aspects; powerhouse programs, Cinderella stories, and unforgettable endings. One thing almost all sports fans can agree on is that they love to see a Cinderella story. This story means a team with low expectations and a low ranking, unexpectedly achieves major success. When filling out their March Madness brackets, fans love to try and predict who these teams will be. Evan Simonds ‘19 is a big college basketball fan  and has made some bold predictions for his March Madness bracket this year. “I think Kansas State and Murray State (will cause a Cinderella story),” said Simonds. With Murray State’s “offense lead by Ja Morant that couldn’t impress a sports fan more, as well as an electrifying defense,” Simonds sees Murray State as a true contender for making unexpected noise in the tournament.

Popular sports analysts always have a strategy for figuring out which lowly ranked team will cause some upsets. After looking at the past four Cinderella teams, analysts have found a few trends as to what makes these teams successful. “For starters, all four had veteran-laden rosters,” said Mitchell Northam, author from NCAA. “Each of those teams also had a player or two with potential star power.” One of Northam’s predictions for what team will make noise is the South Dakota State Jackrabbits. South Dakota State features one player who has had a pretty remarkable collegiate run. Senior forward Mike Daum hit 3,000 career points last month, just the tenth division one basketball player to achieve this feat. He also averages the fourth most points per game in the country, showing why South Dakota State shouldn’t be treated lightly in this tournament.

Even with the Cinderella teams, the powerhouse programs, who are top-ranked, usually still make a lot of noise in the tournament. This year, many teams have shown glimpses of why they could be the national champions. A few of these teams include Duke, Virginia, North Carolina, Gonzaga and Kentucky. These teams all feature superstar players with great coaches who have a lot of March Madness experience. The Duke Blue Devils are favored by Vegas to win the entire tournament, with good reasons. “There is no questioning that this group has elite talent. RJ Barrett and Zion Williamson will likely be the top two selections in the next NBA Draft and Cam Reddish won’t be far behind them,” said SBNation. Along with having these three superstars on their team, Duke is coached by one of the best college basketball coaches ever, Mike Krzyzewski. Duke may be led by all freshmen, but their coaching staff certainly isn’t lacking any tournament history, with Krzyzewski appearing in 12 final fours and winning the tournament five times.

March Madness this year is really set up to be crazy, as this year seems to be filled with powerhouse programs and many underdogs. The official brackets are released Sunday the 17 during the annual “Selection Sunday,” while the games start Tuesday the 19.