The beef with beef jerky 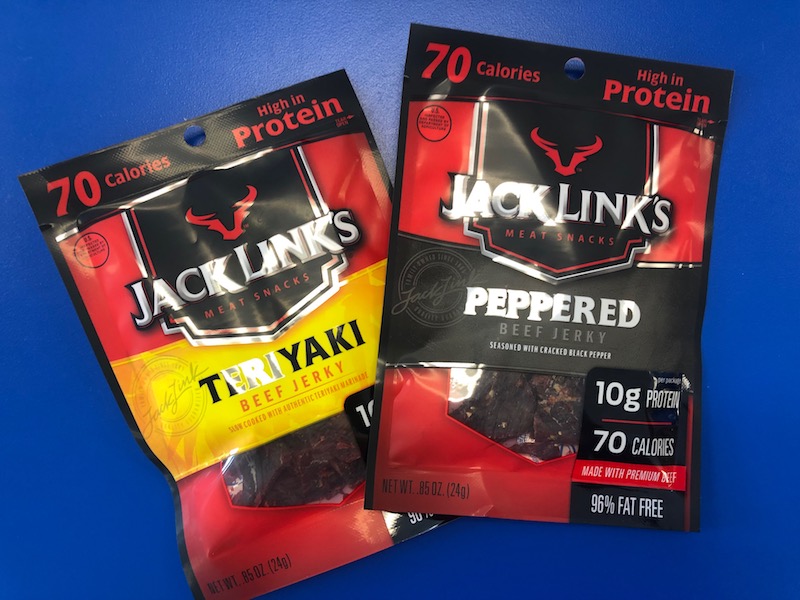 Pictured above are two 0.85 ounce bags of beef jerky sold by the cafeteria. “Teriyaki” and “Peppered” are two of the three flavors sold; they also happen to be equally popular, while the third flavor, “Original,” trails just a couple sales behind.

At the start of the 2018-2019 school year, the cafeteria began selling beef jerky. This may strike some of you as unappetizing: not everyone wants to see “school cafeteria” and “beef jerky” in the same sentence. However, it wasn’t just your run of the mill, off-brand beef jerky: it was brand-name Jack Link’s Beef Jerky. It wasn’t even the reduced fat version, which is usually a prerequisite for cafeteria snacks. It was the same beef jerky you’d find at the customer check-out lane at your local Target… at least, so it seemed.

At a distance, a student can’t really tell — but up close, one realizes that the bags are significantly smaller than the Jack Link’s packs that could be found outside campus. This isn’t particularly off-putting, as the jerky consistently maintains its quality despite the smaller portions. Logically, the student would think, you simply pay less money for less jerky.

Kylie Krivis ‘20 decided to purchase a bag of beef jerky at the end of February. “A lot of my friends had gotten it before,” said Krivis. “I figured I’d give it a go.”

Krivis entered the lunch line equipped with $5.00, but she estimated the jerky to cost around $0.50. After all, the 2.85 ounce bag at Target costs $4.00 — this averages to around 71 cents per ounce. The bags in the cafeteria are 0.85 ounces, so they should be estimated to cost about 61 cents.

She chose the teriyaki bag after “meticulous consideration” and approached the cashier. She handed the cashier her fiver and waited for $4.50 to be put back into her palm.

“I eventually watched the cashier put two dollars into the register,” Krivis retold in horror. “Two whole dollars… For that tiny bag of jerky! I was nothing less than shocked.”

Many who have a lunch account didn’t even know how much it actually costs; all they have to do is enter their lunch number without worrying about cash payment or change. Some students estimated the bag to cost $0.25. With the average bag of jerky containing around eight pieces, the actual price is closer to $0.25 per piece than per bag. When told of the true cost, most student’s reactions were similar to Krivis’s.

Noah Penasack ‘20, on the other hand, doesn’t find the price to be all that absurd. Although he had originally estimated the bag of jerky to cost less than $1, he generally finds most cafeteria food to be “wildly overpriced for what you’re actually getting” from an economic standpoint. Thus, the price of the high-quality-but-low-quantity beef jerky doesn’t necessarily surprise him.

“The cafeteria has established a monopoly on food and other concessions in the school,” Penasack said. “So they can charge whatever price they want. It’s really teaching kids communism, and what we should really have is competing entities that can sell food in the school, which would drive down prices and teach capitalism to American children.”

Penasack believes that if there were an alternative operation selling beef jerky for lower prices, as made possible through a more “free market” within the school, the cafeteria would be forced to also lower their prices to keep up with the competition. However, he understands that this idea is categorically against school policy. Instead, he ends up agreeing with the majority of students: the cafeteria should lower prices on the beef jerky.

“If you’re going to create a monopoly, you shouldn’t then be able to set outrageous prices,” Penasack said. “If you’re gonna have a monopoly, the prices should be low to correspond with the fact that the consumer has no options.”

A change like this wouldn’t be that easy to accomplish. The federal food plan that the school is currently bound to has a very limited budget. Expenses are already very tight, so the existence of the beef jerky is truly a rare commodity. Luckily, it’s been doing well to bring in extra funds.

According to Megan King, who works in the cafeteria, they started selling beef jerky in part for its nutritional value: beef jerky is jam-packed with protein. It also was apparently in “high demand” through requests from students.

“The beef jerky has been very popular,” King said. The cafeteria is getting a three-box shipment this week alone, and the shelves are still stocked. So, the cafeteria seems to be making a profit off of this seemingly overpriced snack. However, King explained that the price really isn’t as high as the students may perceive it to be. “The cafeteria is [profiting off the beef jerky sales]. We sell them for two dollars a bag,” said King. “But our [the cafeteria’s] cost is actually pretty high. It’s around $1.60 a bag.”

So, in the end, the cafeteria is really profiting around $0.40 a bag, a pretty low margin considering all the food they have to pay for with an already limited budget. That being said, the so-called “issue” with the beef jerky prices isn’t really an issue at all. Despite the alleged complaints, beef jerky is still very popular and remains at the top of the snack food chain. Even Krivis, who was originally very upset about paying her two dollars, continues to buy beef jerky from the cafeteria.

Until then, students will continue to pay the two dollar price for beef jerky and probably whine a little bit while doing so. After all, it’s what teenagers do best.