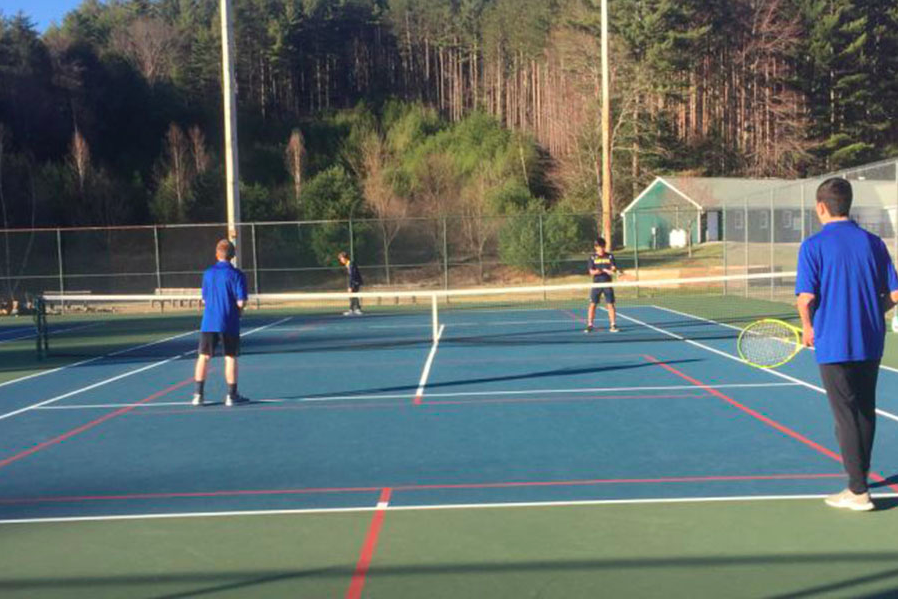 Rory Klauber (left) and Will Pesiridis (right) competed in doubles against Conval this past Wednesday. “This was the only loss during the match,” said Pesiridis ‘21, but it didn’t pose a threat to the team as they ended with an 8-1 win. The boys’ next game is against Goffstown on their home court!

Last season, the Boys Tennis Team fell short at the Division II Championship to their local rivals, Souhegan High School. The team is determined to make it back to the finals, and now they have the experience from last year as an advantage to do so.

The team is very optimistic about the season that’s ahead of them, especially after defeating Souhegan during their third match of this season. “I think we are going to win [the championship],” says Sreekar Chilakapati ‘20. As of now, the team has won all of their matches that have been played including Portsmouth and Souhegan, their top competitors.

James McCann, the boys tennis coach, states that it’s very likely they will see Portsmouth and Souhegan again in their playoff matches. Hollis Brookline has already beat Bow, who moved up to Division II this year after winning the Division III Championship last year.

According to McCann, the team has added four new players that “give [the team] more depth and flexibility in matches.” This year’s team consists of thirteen players in which the top six compete in single matches and then double matches are played after.

The top six players team up to play in the doubles. They are: Nic Vahe ‘20 and David Paradie ‘20, Max Burns ‘20 and Ben Zielinski ‘20 and Alex Anghel ‘20 and David Cherkassky ‘19. The points gained during these matches are counted towards the overall team score just like the single matches.

Vahe, a returning player, leads the team as the number one rank out of the top six players that compete. He has been the number one player since his freshman year when the team started to gain more skilled players. Vahe explains that the last year’s championship loss has taught the team mental strength and working together.

Although the boys are set on going back to the championship, it takes more than just dominating the court to pull off the wins.“The best part about the team is the fun we have together, even though we are supposed to take it seriously,” says Vahe.

The matches are played in Nashua at the Nashua Swim and Tennis Club. The team has seven regular matches left in their season before the playoffs begin. They, including Coach McCann, would love to have fans cheering them on!