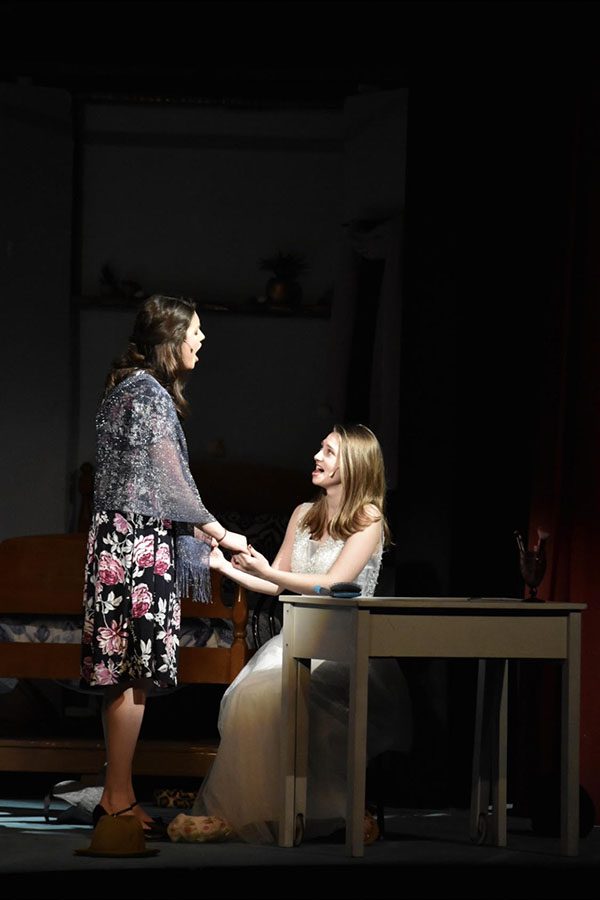 Nicole (left) and Laurie (right) played two main roles in Mamma Mia. “Our productions have become much more student-led...it is my conviction that Laurie and Nicole were essential in all of these improvements,” said Barbosa. They next play was Almost Maine, which both Nicole and Laurie starred in.

Many talented students have contributed to the Hollis Brookline High School theater program and made it what it is today. This year, the theater program will say goodbye to two skillful singers and actors, Nicole Plummer ‘19 and Laurie Houvener ‘19, who played a significant role in building the program.

Plummer and Houvener have passed down their legacy and theatrical knowledge through the years. According to Matthew Barbosa, the director of the theater program, they “already have the best parts of both of them [Plummer and Houvener] here within the younger theater community.” Whether the girls have a main role or a part behind the scenes, they have set an example for the upcoming students participating in the program.

“I just hope that I’ve inspired some underclassmen to continue to follow their passion for theater,” said Houvener. To Plummer and Houvener, it’s not about being the star of the show; it’s the idea that they are inspiring others. “There is something incredibly freeing about that experience,” said Plummer.

Plummer, who has participated in theater programs since she was in fourth grade, is attending the University of Miami to major in vocal performance. She plans to have a career in opera, and although she won’t be pursuing theater, she intends to keep the hobby around.

On the other hand, Houvener is attending Rutgers in the fall and also isn’t planning on majoring in theater. However, theater plays an important role in her life. She participated in a camp with the theatre group Peacock Players when she was in fifth grade, and definitely wants to keep herself involved with the art as often as possible when she leaves for college.

Barbosa explained that Houvener has impacted the theater program greatly, not necessarily through her theatrical talents, but her attitude in the works. “Laurie’s patience, humility, calm and grounded approach, and empathy are not only to the highest level with which I have been fortunate enough to work [with], they are also contagious,” said Barbosa.

Although they are both graduating in less than a month, they have certainly left their mark on Hollis-Brookline’s theater program. Their last high school play was Almost Maine, which showed Friday, May 9 and Saturday, May 10.