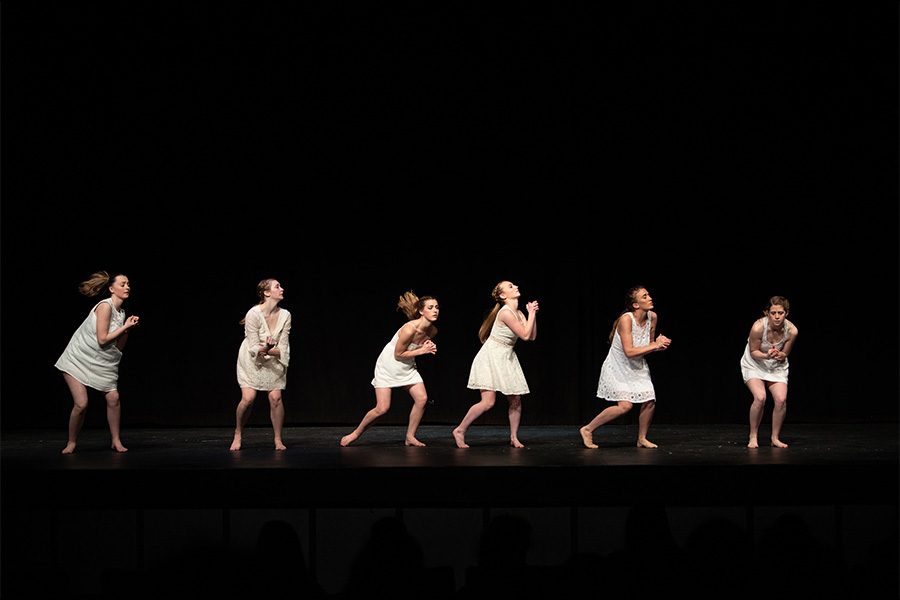 Johanna’s show turned out to be a huge success. The dancers were graceful and represented Johanna in a classy way

Here at Hollis Brookline High School, we have a variety of electives, one of which stands out as unique for our senior classes. Senior Quest is a full year elective wherein students produce a project of their interest. This project consists of creating an idea, researching it and then completing it over an elongated period of time to make it comprehensive and impressive to their teachers and peers. Each student who completes a Quest project will also have to present it at the end of the school year. One of our students put on a dance show for her Senior Quest project. Johanna Golden ‘19 put on her very own show entitled “Renewed Smile.”

Golden put in hard work to make her piece the best it could be. Ever since she was little, she always had an interest in dance. “Dance has always been a big thing in my life since I’ve been dancing at the age of three,” says Golden. Her main focus was to cover modern dance in her show. Modern dance has sparked an interest in her for quite some time, so she dug deeper into finding out the history that lies behind it, and was able to show the history within her performance of how it has evolved today. She had been looking for the opportunity to put her choreography skills to the test for quite some time, and her time finally arrived. Golden is the head choreographer of the piece and she independently crafted a routine for her show.

Chelsea MacNamara ‘19 and Lauren Dattis ‘20 performed alongside as well as four dancers from Boire Dance Academy.“Johanna is a very determined person. She always has a plan as to what she wants to do for the rehearsal, and she gets it done, no matter what she is facing. I would be so honored to work with her again as she taught me so much over these last couple months and I am so happy for her.” said Lauren Dattis ‘20. Her determination really shined through her work, especially for the girls who had been working with her since early Sept. 2018.

Beyond this one project, Quest has taught a lot of students real-world experience and tips for their adult lives. “It has allowed me the time and credit to pursue a passion project that gave me a head start on my career,” said Holly Hazleton ‘19. Golden felt the same way “It has taught me how to use time wisely, time management is a very useful thing in life, also getting the experience of learning how to critically think and fix solutions right on the spot.” It was critical on Golden’s part to have the skills to be able to run a dance show on her own in her future career. She gets the experience as she is “choreographing six people when I am only one person to manipulate on myself,” said Golden. It can be hard on students to keep focus on one thing for such a long period of time, but with this project, you never stop working you always have something to cover or fix in the process of the making.

Johanna’s senior quest project “Renewed Smile” took place on May 15 at 7pm in the HBHS Auditorium and was a big success.