2020 is for the girls: how female presidential candidates are saving the country 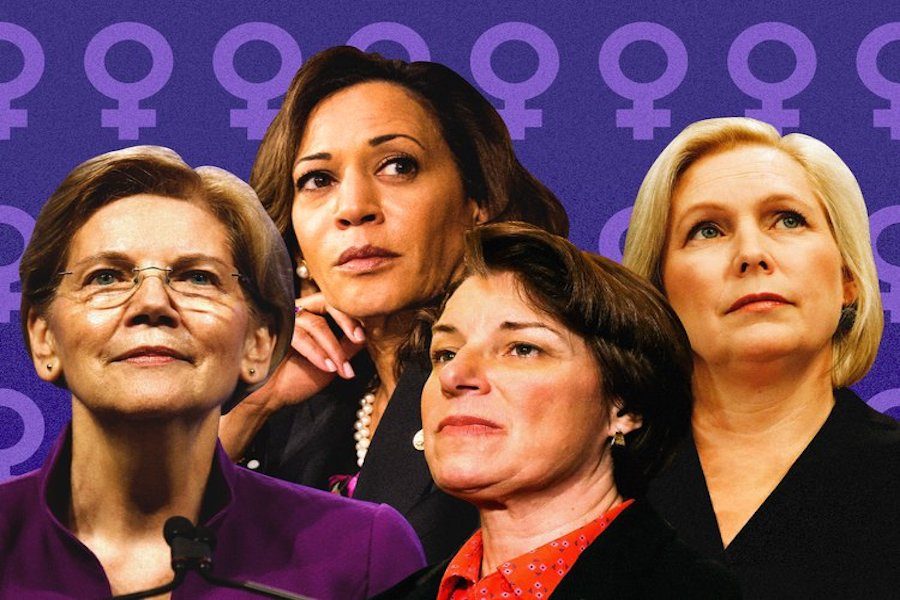 From left to right: Sen. Elizabeth Warren (D-MA), Sen. Kamala Harris (D-CA), Sen. Amy Klobuchar (D-MN), and Sen. Kirsten Gillibrand (D-NY). All are running in the Presidential Election alongside even more female candidates. There are a record number of women running for the 2020 spot.

Last Wednesday, Alabama enacted a bill that would practically illegalize all abortions in the state. This includes pregnancies that may occur via rape or incest. HB 314, which could punish doctors who perform abortions with up to 99-year sentences, was signed by Governor Kay Ivey despite major opposition from the state and the country at large. While Ivey is female, the bill was moved from the senate by 25 white, male senators. Only three female senators had a voice in the passing of the bill, two of which voted against it.

This “heartbeat abortion” law is incredibly disturbing, not just because of the disastrous effects it will have on the women of Alabama, but more so its larger implications and the widespread movement that it represents. There’s a troubling number of people in the country, including several Washington higher-ups, who see punishment by the means of death as a suitable response to women making choices about their own bodies. Not only that, but the lawmakers spearheading the movement are male. This feels wrong, no? Men controlling what women do with their bodies just feels wrong. They’re missing the perspectives and experiences that are absolutely necessary to fully understand the issue of women’s bodily autonomy. So, why don’t they just gain some perspective from their female lawmakers?

The trouble here is that there aren’t that many.

In the United States, there are actually more female citizens than there are male citizens, with about 50.52% of the population being women. In Congress, this percentage is vastly lower: only about 27% of Congress is female. The female perspective is almost nonexistent.

“It’s even worse for women of color,” says former intensive gender studies student Micayla Billouin ‘20 (NY). “When women do run for office, they’re usually white. So really we’re missing the voice of the most prejudiced group of people in the country.”

While this information is disappointing (to say the least), there is still a lot to celebrate. In 2016, Hillary Clinton became the first woman to win a presidential nomination. Two years later, a record number of female candidates ran for office in the midterm elections, with 125 successfully voted into office. These were both major steps forward for female representation in office, so not all hope is lost.

Following this progressive trend, a record six female candidates have entered the 2020 Presidential Election race, notably Sen. Elizabeth Warren (D-MA) and Sen. Kamala Harris (D-CA). Having a woman in the highest level of government office would surely bring a perspective that the seat has never offered before. But regardless of whether a female candidate wins or not, the fact that so many women are running will transform the current American conversation on gender in a way that will empower current and future generations of women and girls.

According to a study by the Pew Research Center, about 59% of Americans agree that there are too few women in high political offices. Of that 59%, 79% identify as Democrat, while 33% identify as Republican. With this data in mind, it makes sense that all the current female presidential candidates are on the Democratic ticket. However, Carly Fiorina made a significant run as the only female Republican candidate in the 2016 Primary Election. She argued, however, that “she doesn’t want votes just because she’s female,” and that her gender was completely irrelevant to the existence and success of her campaign.

While this was widely interpreted as more of a jab at Hillary Clinton and the feminist movement than anything else, this notion does have some, howbeit limited, substance to it in the sense that it sort of backhandedly encourages the normalcy of female candidacy. It’s less of a disturbance or an antipathy to see a woman on the ballot. A female candidate can be encouraged to run, just like any other candidate, and other women will follow after seeing the success of said female candidate. It’s this cycle of normalcy that we need to get more women running for office, and, consequently, more women into positions of power.

What will also help, apart from normalization, is taking a look at the wonderful successes of female leaders in other countries. Angela Merkel, elected as Germany’s first female Chancellor in 2005, is considered by Forbes Magazine to be the most powerful woman in the world. Her resilience against Donald Trump and her acceptance of Syrian refugees mark the strength of her chancellorship, as well as her steering Germany out of economic pitfalls to stable growth.

Zuzana Čaputová was recently elected as Slovakia’s first female president. Her platform was built on her experience as a human rights lawyer, her strong support of the LGBT community, her equally strong condemnation of xenophobia and her campaign slogan, “stand up to evil.” Her win was a triumph for progressives and women in Europe and beyond. Indeed, even our good friend, Theresa May, has defied all forces against her in her persistent, albeit annoying, plight to exit the European Union. While I don’t necessarily agree with her plan, it’s actually remarkable that she’s made it this far with so much pushback from her own country and other countries.

Female leaders have time and time again proven to be powerhouses. Having more resilient, even outspoken female leaders in the country — yes, I’m talking about you, Alexandria Ocasio-Cortez — will further demonstrate that statement.

“I think we’re really seeing women be more aggressive this year in politics,” says Shayna Becker ‘20 (CA), a vocal feminist. “I guess that might be a little scary or intimidating to male lawmakers, but me and the rest of us girls are feeling empowered. There’s nothing to be scared of, anyway. Women bring something to the table that men just can’t.”

Overall, having more women running for president this year is sure to normalize the idea of having female lawmakers, or (we can hope) even cast them in a more empowering and encouraging light. More diversity is necessary in a democracy so legislators don’t continue to set policies based on a single perspective, thereby catering to one represented group. To properly represent the diverse spectrum of human beings in our country, they can avoid getting caught in this rut by showcasing a variety of viewpoints. This way, we won’t keep facing the issue of having male lawmakers making weighted decisions that can and should be made with female input. Seriously… representation matters.