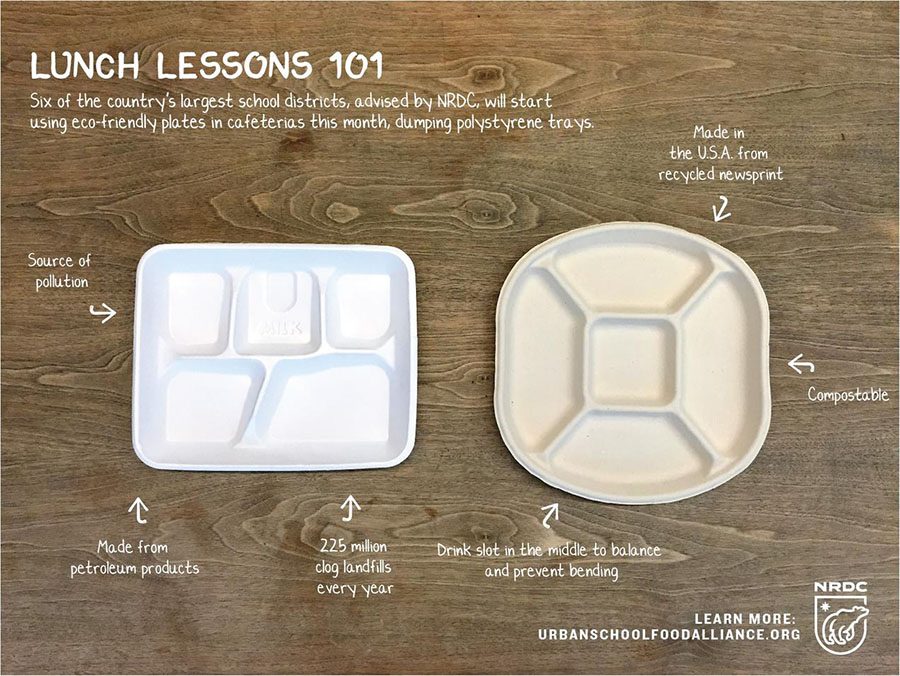 Comparing the styrofoam and paper trays next to each other, it's clear which choice is best. “I saw online that Maine banned styrofoam all together, so I think that New Hampshire should try to do that,” says Meghan Veino ‘20.

On Monday, May 13, many students noticed a change in the lunchroom: paper trays. Switching from Styrofoam trays, which are extremely lethal for the environment, the school planned to make the temporary change for Earth Day.

In 2010, New York City created Trayless Tuesdays for all public schools in the area to follow. Only on Tuesdays, the students use paper boats instead of Styrofoam trays. Cafeteria Culture’s campaign, Styrofoam Out of Schools (SOS), asked the NYC Department of Education (DoE) to reduce the use of styrofoam trays by 20%. On Tuesdays, school cafeterias in NYC adjust their menus to accommodate using the paper boats by serving non-messy foods, such as sandwiches. The boats can even be recycled if they are clean and dry.

Just five years after Trayless Tuesdays was initiated, it had eliminated over 100,000 million styrene foam trays from landfills, incinerators and student lunches. It has also prevented 2.4 million plastic foam trays per month from going into landfills.

Polystyrene (Styrofoam) is composed of petroleum, a non-sustainable and heavy polluting resource. Often ending up as litter due to its lightweight nature, styrofoam escapes garbage containers and ends up in the ocean (particularly in NYC, which is surrounded by water). The litter then breaks down into small pieces that birds and marine life mistake for food.

In our own cafeteria at Hollis Brookline High School, head cook, David Hayes, says “We try to do as much as we can in our part to save the planet.” As someone who serves food to students every day, Hayes gets a first-hand look at all the products that become waste.

Due to the expensive cost of the paper trays, they are only temporary, as styrofoam is the cheapest option. “We have to be kind of creative in regards to cost saving and measuring, so we can afford to spend a little more on a product that will breakdown and not live in a landfill for 1000 years,” says Hayes.

The burning question does come up: does the cost matter if it’s saving the environment?

“In the long run I don’t think that [the cost] matters as much as the bigger picture,” says Environmental Science teacher, Camille Carson.

Though the paper trays are a step in the right direction, the school could be doing more. “There’s a lot of classrooms that don’t even have recycling bins,” says Jessica Hubert ‘20. “Some classrooms have two bins with bottles and paper, but they all go to the same place, so it’s kind of redundant.”

Could this temporary lunch-time change be the start of HBHS taking a more environmentally conscious route? Let’s hope so.