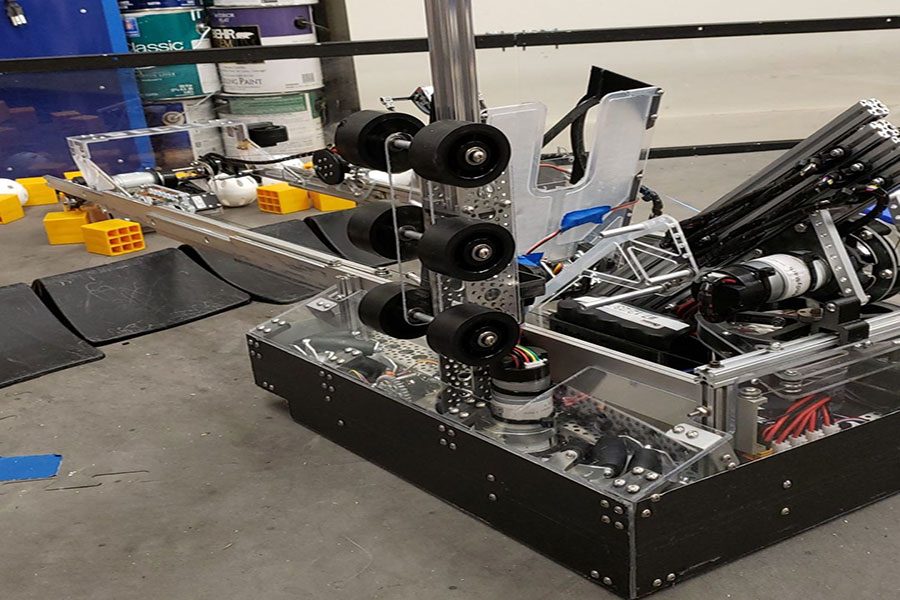 Pictured here is the Szczeszynski robot “Gluten-Free” which lead them to to win their field and the Einstein trophy.

Hollis Brookline’s  Szczeszynski brothers (Peter ‘19 and Steven ‘20)  set records in their FTC (First Tech Challenge) and won their field in the Detroit Championship meet for Robotics. They also received the Control Award, which is awarded to the best and most reliable autonomous robot that relies on sensors.

Peter Szczeszynski ‘19 recently competed with his younger brother Steven Szczeszynski ‘20 . The duo made up one of the 800 teams that competed in the FIRST Championship games.They became one of the winners with their robot named “Gluten-Free.”

FIRST robotics is technically an international organization, but it is US-centric, making up 80% of the robotics league. The Szczeszynski boys have been hard at work in order to be invited with the little over 20% of students who make the robotics championship. They did this by scoring high enough in other regional meets. Their task involved building a competitive robot that would be able to move objects around a 12 by 12 area.

The tech challenge incorporates many aspects of robot building, including innovative, and sound engineering principles. The goal of the teams is to build based on “real-world math and science” challenges and to try and to emulate the engineering process. The Szczeszynski’s, and every team in the FTC are allowed up to three mentors per team to help them with all aspects of the challenge. The Szczeszynski’s mentor was Christan Szczeszynski, a math substitute at HBHS. These mentors can help show and explain things like the engineering process or help with building, which she did.

The Szczeszynski’s play in a competitive league according to Justin Holmes ‘20 member of Team 1073. They play in a different league than the FIRST competition the HB team plays in. This limits the team’s ability to produce robots by having maximum team size and budget constraints. Holmes said that one of the biggest limiters on joining the high school team is “making time for enough meetings.”

However, the being able to work outside of the high school has many pros because the two have more time to work on the project together, and ultimately were able to maximize their assets in order to win their field.

Congratulations to the Szczeszyski’s on their amazing achievement!