On to the quarterfinals for boys lax 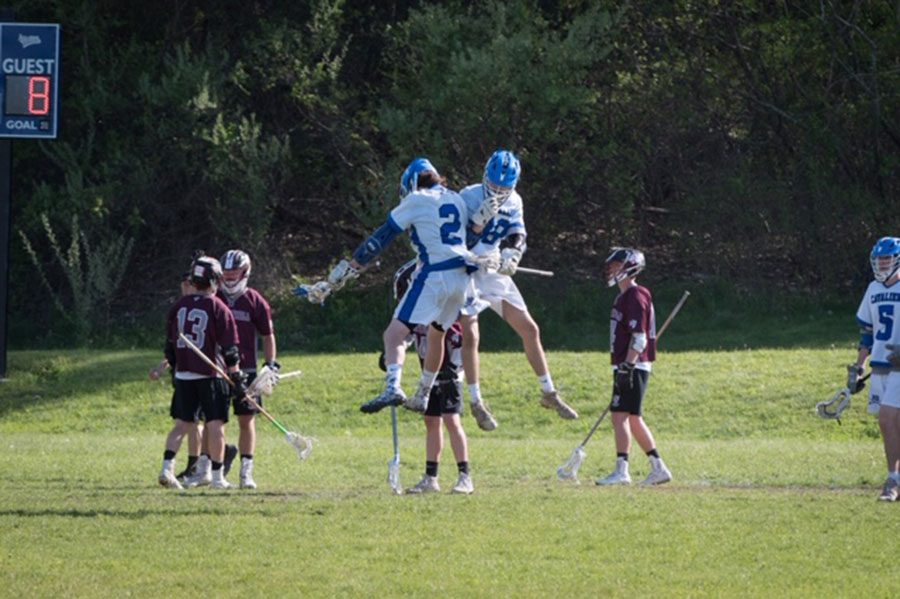 The quarterfinals game will be played on our home turf, and the fan support is expected to be numerous. Super fan Dhruv Miglani ‘19 is among the many fans hyped for the playoff run. “The boys have really improved on both ends of the field, and Tim Sulin is a beast!,” said Miglani.

On May 30, the boy’s lacrosse team won their opening playoff game 18-5 against Bow. After beginning the season on an 11 game winning streak, the team faced their first bit of adversity losing their final three regular-season games against Derryfield, Winnacunnet, and Windham. Still, the team finished with a solid record of 12-3, good enough for the 4th seed in the playoffs.

While the team would have liked to go undefeated, they acknowledged that the rough patch to end the year will be good for them moving forward. “It definitely shows we have to focus up for the playoffs,” said attacker Dylan Terenzoni ‘19. The losses were a wake-up call that they needed to play better if they wanted a shot at a title.

The boy’s had a historic regular season, with a goal differential of 96 (174 goals scored, 78 goals allowed). Scoring double-digit goals in all but 5 games, the team had an offensive formation that was difficult to stop all season. “Our coach drew up plays that helped get the ball in our sticks for quality shots and when the plays weren’t working we let our talent speak for itself,“ said midfielder Tim Sulin ‘19. The offense clicked early for the Cavs, allowing them to win 6 games by 10 or more goals.

Defensively, the team allowed 10+ goals only once all season, a game where Derryfield just hit the double-digit barrier with 10 goals. Goalie Scott Walsh ‘21 was quick to credit his defensive line for their solid defensive campaign and knew the team’s chemistry played a part in their success. “I think [our success came from] the whole defensive unit working together and just pushing through the mistakes we made and correcting them,” said Walsh.

Head Coach Cameron Heyward is still confident in his team’s abilities but knew he’d have to make some changes entering the first round. He compared his team to the Virginia Cavaliers lacrosse team, which won the national championship despite entering the tournament as the 6th seed. Heyward made it clear that talent will only take them so far, and that they’ll have to play as a complete team in order to advance further in the playoffs.

Losing their last regular season game against Windham lost the Cavs an opportunity of a first-round bye, but the preliminary round may have been a blessing in disguise. The game took place at home against 13th seed Bow, where the Cavs looked to prove to everyone they were still a contender after their shaky end to the season. The team immediately jumped out to a 2-0 lead after less than two minutes and led 6-2 after the 1st quarter. Adding 6 more goals in the second to enter the half leading 12-3, the Cavs never looked back en route to an 18-5 win. The win gave the boys their confidence back, and they’ll now have an opportunity to stay hot against 5th seeded Goffstown in the quarterfinals.

While HB didn’t play Goffstown during the regular season, they are in for a good battle. Goffstown started the season poorly at 2-4, but went on to win their last 10 games and secure the 5th seed. A win in the quarters would match HB up with the defending champs Derryfield, the number 1 seed and favorite to win it all. The team would love to get revenge on Derryfield but know they can’t look too far ahead.  “We have to take it one game at a time and focus on our current opponent,” said defender Connor Farewell ‘19.

A first-round bye would have forced HB into a tough opening round matchup, something they desperately were avoiding after losing 3 straight. Their opening round game against Bow, while still a hard-fought game by both sides, was a good game to get themselves back in the winning ways. The blowout win may end up being the spark they needed to make a playoff run.

The quarterfinals game is set for Saturday, June 1. With only one day off between games, the boys will need to rest up in order to be at full strength. More importantly, it gives the team limited time to game plan. “We’ll definitely review what we need to do for Saturday, Goffstown along with any team we face in the playoffs should not be taken lightly. This is win or go home and we want this run to continue, so we’ll control what we need to control and let our preparation speak for itself,” said Sulin.