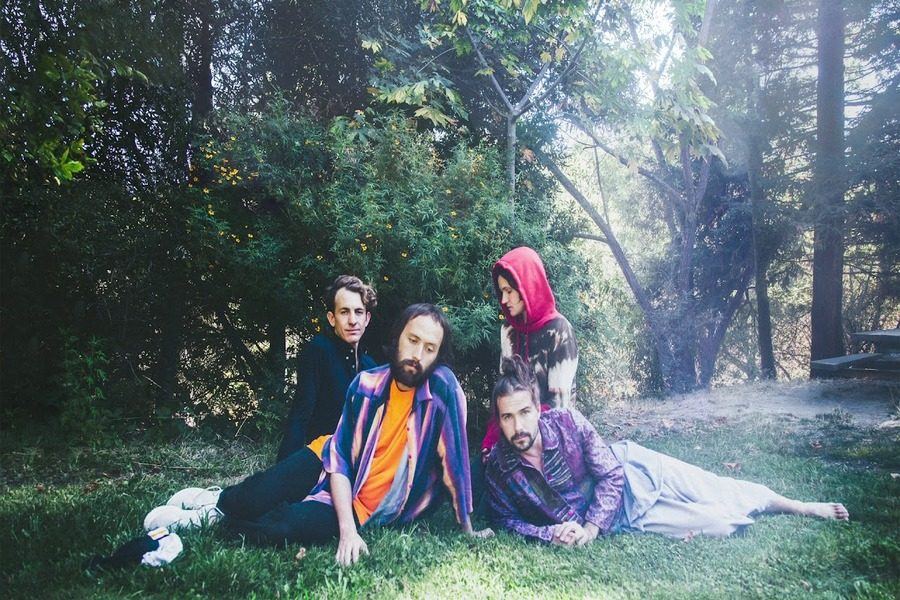 The cover and expanded cover of Big Thief’s U.F.O.F.

Big Thief is a band with no small amount of experience with deeply emotional, heart-wrenching albums, but their newest, U.F.O.F. (2019), provides whole new dimensions of strange love and regret. Based out of Brooklyn, New York, Big Thief debuted in 2016 with Masterpiece, to great critical success, and followed it up with the even more beloved Capacity in 2017. However, on this album, despite its hi-tech name, the band takes a relaxing, mournful tone that is every bit joyful as it is heartbreaking.

The album immediately presents its ghostly, luscious sounds on the first song “Contact,” though the track takes a sudden, last-minute turn towards the intense with an electrifying, screeching guitar section. The title track delivers a similarly romantic vibe, but also puts the delicate voice and songwriting of Adrianne Lenker on display; her style and rhythm give even the lightest of instrumentals a deep, powerful impact. Her lines feel raw and untamed; when she says “She is the dreamer and the dream,” or “I can see her smiling through / The white light of the living room / Leaking through the crack in the door,” it feels fully convincing and uncliched. Her lyrical and poetic skill combined with the elegant, flowing structure of the songs makes for a perfect combination. “Cattails” is far more mournful, acting as a sort of fond remembrance of Lenker’s grandmother, taking on an affectation that’s reminiscent of classic American folk and country.

The tracks “From” and “Open Desert” take on a quietly defiant, but also mysterious tone, painfully dealing with love, death and moving on. “Orange,” by far the most intimate song on the album, cuts down on the excess to emphasize Lenker’s voice and a simple acoustic guitar. This  also deeply emphasizes the beautiful lyrics of the track, “Orange is the color of my love / Fragile orange wind in the garden.” One might even say that many of these more acoustic cuts are influenced by, or at least convergently similar to, Ani DiFranco’s hits. “Century” continues on this thread, with Lenker softly crooning about the similarities between her and a lover. This is broken up by the delightfully bouncy “Strange,” which delivers a brief contemplation of all the strange things in life.

However, just as quickly, the album continues its thoughts on love. “Betsy” lovingly describes a late night drive in New York, though Lenker continues to leave the exacts of her love-life appropriately cryptic and obscured. “Terminal Paradise” is not only a heart-wrenching emotive peak to the album, but also lyrical peak; “See my death become a trail / And the trail leads to a flower / I will blossom in your sail / Every dream and waking hour,” whispers Lenker in a painful act of acceptance. “Jenni” delivers even more electrifying, rumbling guitars and wraith-like, ghostly vocals that strain with tones of intense lust and perhaps rage. The final track, “Magic Dealer,” is a reflection on perception and self-perception, and how the narrator cannot buy company or force love by trying to change themselves. It also deals with the fear of being close to others, singing “Would it hurt, would it hurt, to be nearer? / Heaven is stitching across me”

U.F.O.F has been released to great popular and critical success, receiving a 9.2 on Pitchfork and an 88/100 on Metacritic. Notably, the popular reviewer Anthony Fantano (AKA: thatistheplan, theneedledrop, fantano, Cal Chuchesta) gave the album a 5/10, to much controversy. Not only this, HBHS students also seem to enjoy album quite a bit. “[The music is] Ethereal,” said Jack Sinclair ‘19. “I think it’s nice. It’s relaxing. It’s… pretty chill,” said Johanna Golden ‘19. Even some of the teachers seem to enjoy it: “I’m digging the music… very calm, very soothing, very mellow,” said Jennifer Staub, Head of the Social Studies Department.

In conclusion, U.F.O.F. is a quiet triumph for Big Thief. It deftly weaves together all the essential elements of indie rock and folk music whilst adding in new and interesting layers and sonic textures to the mix. This, combined with the adept lyricism and poetry of Adrianne Lenker make for a complex and deep album that never compromises its own strange beauty and glory. U.F.O.F isn’t just worth a listen; it’s worth two.