The Truth About Straight Pride 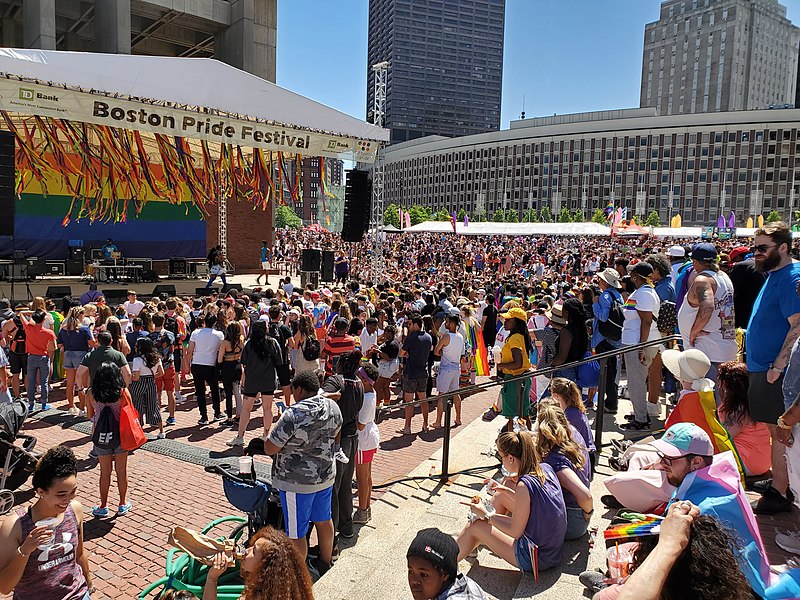 “Maybe we get to a place where we don’t even need [pride parades] anyway,” says Balfour. But until we reach that point, legitimate pride parades are a great way to support members of the LGBTQ+ community and spread the ‘love is love’ message in a healthy, fun and colorful way.

It’s August 31, 2019. Around 200 people are gathered in Boston’s Copley Square, sporting a wide assortment of bright outfits, flashy signs and pre-prepared chants. They’re about to march in Boston’s first straight pride parade that will end in City Hall Plaza. This isn’t a scene unfamiliar to Boston; every year in June, Boston Pride hosts a parade similar to this one. So what makes the two different? And why did the parade receive such strong backlash?

The parade was organized and run by Super Happy Fun America, a recently-formed nonprofit celebrating the “vibrancy of the straight community.” The parade followed a similar route to that of Boston’s annual LGBTQ+ pride parade, and was being held to celebrate ‘straight culture.’

On the surface, this may seem like a fairly innocent concept. In reality, the parade celebrated much more than straight pride; it painted the heterosexual community as an ‘oppressed majority’ and the LGBTQ+ community as the oppressors. A wide assortment of people marched, including various caricatures of the members and allies of the community that walk in Boston’s annual LGBTQ+ pride parade. The marchers perverted phrases typically championed by the oppressed, chanting “straight lives matter!” and demanding that an ‘s’ be added to the coalition’s acronym LGBTQ+ for ‘straight’.

A particularly worrying fact is that this whole parade was being held in the  often-recognized liberal city of Boston. This wasn’t as surprising as it could have been. The city didn’t support the parade in the first place; the permit was granted based on operational feasibility, not values. Boston Pride even released a statement about the parade. In it, the organization discusses the true motivations for the straight pride parade: that it’s a celebration of hate pride.

Despite the worrying nature of the parade, not many people were actually worried about it in the first place. “I like the mayor’s response [to the parade], that he’s disappointed that the parade took place, but I wouldn’t say for me it’s worrisome, because… the handful of people who showed up were outnumbered by the people who protested,” said Becky Balfour, a social studies teacher at Hollis Brookline High School. There were more protestors than there were marchers; about 600 protestors to 200 marchers. “There’s always been a group in Boston that’s violent and reactionary and not into being ‘woke’,” says Rowan Gingras ‘20. Anywhere you go, you can encounter people who are reactionary and willing to go to extremes to prove their point.

Thankfully, something positive emerged in the aftermath. “Democracy thrives in sunlight, and when you expose the hate, [the hate] withers,” says Susan Church, an immigration lawyer who works in Boston. She believes that it’s a good thing the parade happened in the first place. “I have very strong feelings about the First Amendment and the right of protestors to make their objections known.” Everyone should have the option to voice their concerns, and the counter-protestors who arrived to voice their opinions exposed the parade for what it really was. Beyond that, the controversy of the parade renewed the conviction of those who fight for LGBTQ+ rights every day, and reminded everyone of how important it is that Boston Pride is a thing in the first place. The simple reality is that the ‘issue’ of the straight pride marchers isn’t a real issue. The real issue is that we need an LGBTQ+ pride parade in the first place. The reality is that just being a member of the LGBTQ+ community is a protest. “There’s something quietly revolutionary in just living as a gay person and not taking [hate] and that sort of thing,” says Gingras. Allowing parades like this allows the struggles of the LGBTQ+ community to rise to the surface to stand in open defiance of what straight pride represents. While Boston could’ve handled the protests better, the fact that they happened in the first place is revolutionary and powerful.

There are other ways to get involved in the fight against hate that don’t involve protests as well. Joining a local or school Gay-Straight Alliance (GSA), is an important first step. Increasing activism in school could potentially lay the groundwork for people to think back and reconsider how they reacted to certain things. “It’s like Martin Luther King, having that dream where we’re all side-by-side and equal and whatnot, and we’re still not there yet. We’ve made great strides and such but we’re not. But until we are, that’s why we have women’s history month and black history and gay history,” says Balfour.

Whether or not another straight pride parade will be happening is uncertain. What is certain, however, is that this parade won’t mark a turning point in the battle against oppression. The voices of the LGBTQ+ community are louder, and next year, Boston’s true pride parade will be back and stronger than ever.