No one likes a soggy hotdog 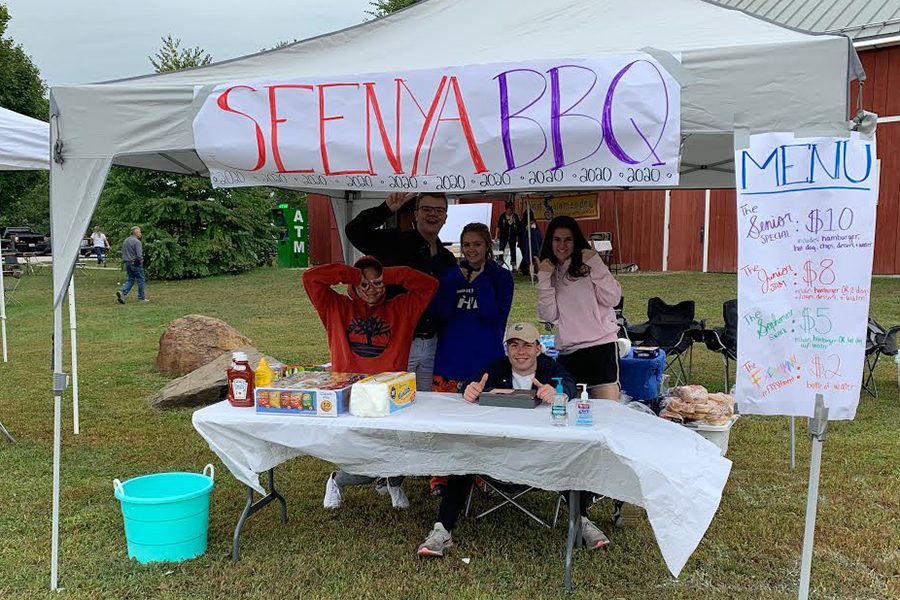 Seniors standing behind their OHD booth getting ready to sell some hotdogs and hamburgers. Every year the Seniors have a booth at Old Home Days to raise money for their class. “During the torrential rain down prores we would have people bring their strollers under and hang out with us for a while,” said Pare.

Old Home Days has always been a great way for the senior class to raise money for all their necessities, but this year’s Old Home Days event turned out a little different. The main factor in the decrease in fundraising was the sad, cold, dreary rain.

The senior dunk booth has had a lot of success in the past with their fundraising at Old Home Days and was hoping for the same this year. “I think that we just wanted to raise as much money as possible, but I think that the rain definitely tanked what we were able to make that day,” said Victoria Flaherty, senior class adviser. The rain also prevented many people from attending the event, and everyone who did attend was shivering the whole time. Lily Coady 20’ confirmed that it was the rain that impacted the fundraising.

The barbecue did not go as seniors hoped, either. “I feel like a barbeque vibe is that sunny day, they kind of go hand in hand, the sun and burgers and hotdogs on the grill and we were missing that first component,” said Coady. The kids in the dunk tank were freezing, and teachers checked on the volunteers every few minutes just to make sure their lips didn’t go blue and their teeth didn’t start chattering.

Old Home Days was not a complete loss, however; the class raised a little under a thousand dollars. It wasn’t what the booth was hoping to make, but it was still a profitable fundraiser. In previous years the booth made well over a thousand dollars and even though they did not meet that again, the seniors are still doing whatever they can to make the money they need.

Thankfully, this is  only the first of many events the senior student council has planned. “We have a lot of things on the horizon and Old Home Days was disappointing, but it’s definitely not the end of fundraising,” said Flaherty. Seniors have the powderpuff game and homecoming coming up, as well as a candle fundraiser. They are also trying to bring back the spring dance. They’re hoping these events can definitely bring back what extra money they lost at Old Home Days.

The money raised goes to prom, graduation and senior shirts.  With all the events they have lined up, the class of 2020 will be able to raise enough money for all of the things they want and need. Pare said, “This class is really great because they are super creative and have come up with a lot of really good ideas.”

The rain may have set them back a bit but this class won’t have any problems coming up with new ways to raise the money lost.