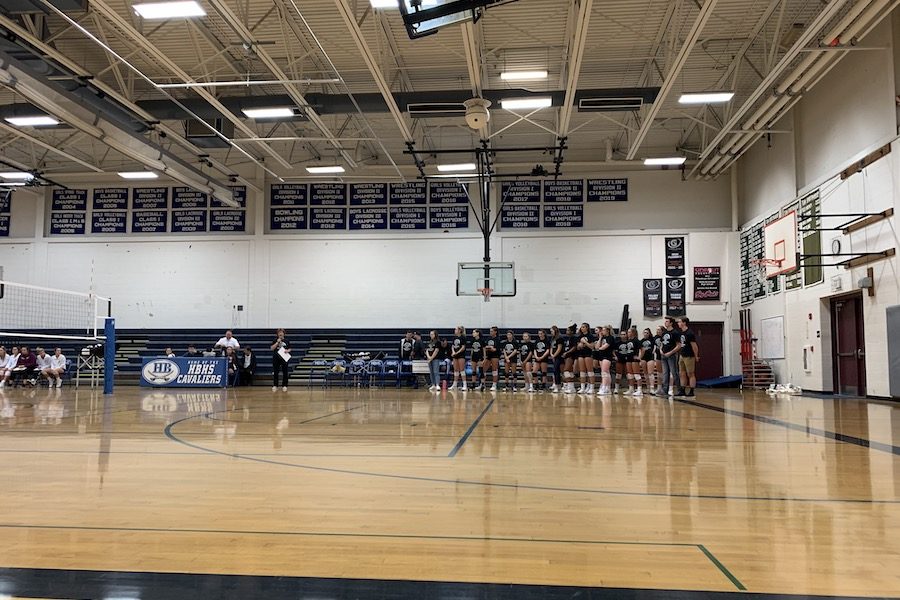 The girls line up as Coach Balfour talks reminiscently before the Kendall Van Schoick memorial game. This is one of their final home games before the Division I semifinals. “It’s a volleyball family here from the middle school, to the JV teams to the varsity team, and I think it’s great to try and create something that’s bigger than yourself, it just takes on a life of its own,” says Balfour.

The Girls Volleyball Team is back on their winning streak. As of Oct.21, they are 16-0, only having lost four sets during the entire season. With Hollis Brookline Volleyball being the only Division I sport in our school, how do the girls manage to remain undefeated?

The girls train both on and off the court, during the regular season and off season. According to Rebecca Balfour, the head coach and history teacher at Hollis Brookline High School, “We get together with the girls and [ask,] ‘What’s our plan for the off season? What are you going to do to prepare for next year?’” Balfour says that many of the girls work hard in the off season and play for club teams around New England.

The training doesn’t begin in the high school. The Hollis Brookline Middle School Girls Volleyball Team is currently being coached by a former HB volleyball player Kat Pellerin. “It’s exciting to watch them,” says Balfour. The girls team at the middle school is currently undefeated.

With all of this success on the court, the team has also been successful in making a close knit family. “I’ve had ‘Balf’ since I was in 7th grade, so growing up with her, I feel like she’s made me into a better and stronger person on and off the court,” says Meaghan Coutu ‘22. Coutu even refers to Balfour as a mother figure.

Cooper also had nothing but praise for her head coach. “She’s a good role model,” she said. ”I feel like I would be lost [without Balfour and the team].”

As the girls near the end of the regular season, with only two more games left, they continue to plow forward, showing their strength and resilience in more ways than one. “It’s been very rewarding,” said Balfour. With a large amount of support from their coaches and the student body, the girls have set their eyes on the goal to dig for five state championships.