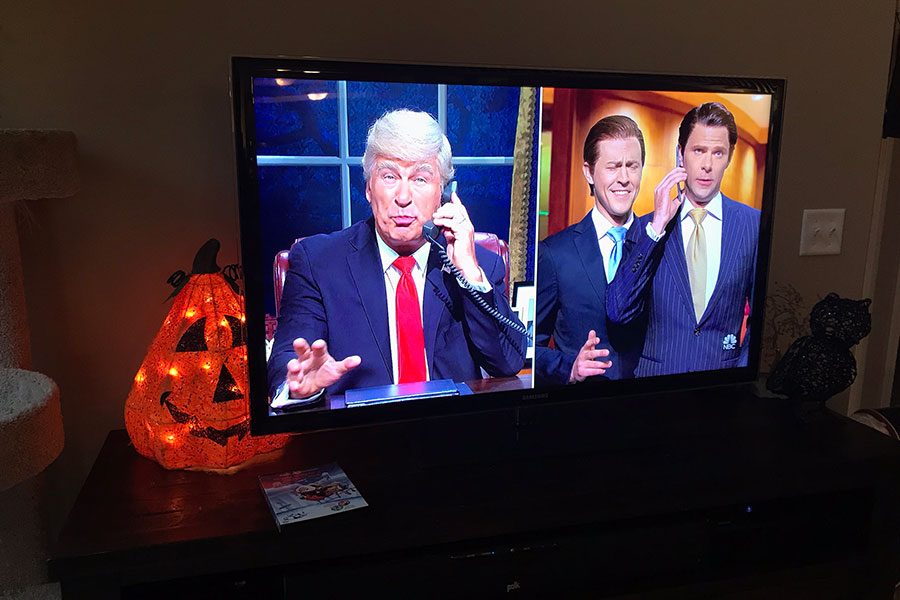 Alec Baldwin returns this episode, bringing back his iconic impersonation of President Donald Trump, with Alex Moffat and Mikey Day playing Eric and Donald Trump Jr., respectively. “How can you not like Alec Baldwin?” said Stoll.

N.B.C.’s popular sketch comedy show, Saturday Night Live, had its 45th season premiere on Sept. 28. Hosted by the brilliantly hilarious Woody Harrelson and featuring the unique vocals and signature aesthetic of musical guest Billie Eilish, the bar was set high for the rest of the season.

One of the most promising aspects of the season premiere was the introduction of two new featured cast members. Following the departure of fan-favorite comedian and actress Leslie Jones at the end of the show’s last season, S.N.L. brought on Chloe Fineman, an improve actor, and Bowen Yang, who was promoted to on-air cast after spending a year on the show’s writing team. The two gave shining performances, with Yang standing out in his role of North Korea’s supreme leader, Kim Jong-Un, in the cold open. He really showed off his acting chops with his portrayal, which was hilariously over-the-top but still recognizable and accurate.

The cold open was another strong part of the episode. It centered around the recent presidential impeachment proceedings with Alec Baldwin performing the role of President Donald Trump.

“I thought their introduction was very impressive, seeing how politically relevant it was, only having a couple days with the actual material to create it,” said Cameron Hallett ‘20, a fan of the show.

Politics have played a big part in S.N.L.’s content in recent years, creating some excellent comic relief in some of the more troubling times.

“SNL, kind of being what it is, is an awesome platform less so for information, but for creating a very black-and-white view of the world we’re in today, which I think can be humorous regardless of which side you’re on,” said Hallett.

The cold open stands as a testament to the quick wit and incredible talent of both the writing team and the actors.

Other beloved sketches included the D.N.C. Town Hall and Apple Picking Ad. The apple picking sketch, about a small apple farm in New York called Chickum’s, stuck out for Rowan Gingras 20’, who said they loved the sketch because, “here in Hollis-Brookline, it really hits home!” Likewise, the return of the news segment, ‘Weekend Update’, was incredibly popular. “I love Weekend Update! It is my favorite, I always watch it every weekend!” said Gingras ’20. The segment, featuring Colin Jost and Michael Che as anchors, is a good way to stay up-to-date on current events and enjoy some hilarious jokes as well.

The talented host, Woody Harrelson, took on the pressure of leading the premiere and didn’t disappoint. He made audiences chuckle with his hilarious fashionista monologue and brought several noteworthy characters to the screen, including Democratic presidential candidate Joe Biden, ‘Farmhand Hank’, and the coach of a losing football team. Special guest appearances from Liev Schrieber and Alec Baldwin served to make the show even stronger.

The episode’s musical guest, Billie Eilish, stole the show with her performances and demonstrated a wealth of talent at a very young age. The first song she performed was ‘bad guy’, which stunned audiences with its special effects. A rotating set and strobe lights made the singer appear to be climbing walls and walking across the ceiling, all while singing and dancing along like nothing was happening at all. Her second song, ‘I Love You’, was reminiscent of her older style of music, with tender lyrics, soaring vocals, and guitar accompaniment by her older brother, Finneas O’Connell.

Overall, the season premiere was a solid kickoff to the season and proved that even after 45 years, the show lives on strong. “I think it’s amazing that a show like this has survived for so many years,” said Daniel Stoll, who has been watching S.N.L. since the eighties. According to him it was very special to sit down on Saturday night at 11:30 p.m. and watch the new episode every week. The show has had a special place in viewer’s hearts for many years. If this episode is any indicator, will continue to bring comedy to audiences for many years to come.

The rest of the season is shaping up to be a good one, with Kristen Stewart set to host Nov. 2’s episode. It’s important to keep in mind that the show has some elements that might not be appropriate for younger viewers, so viewer discretion is advised. But if you like comedy, politics, or both, tune in for the rest of the season to enjoy all SNL has to offer!