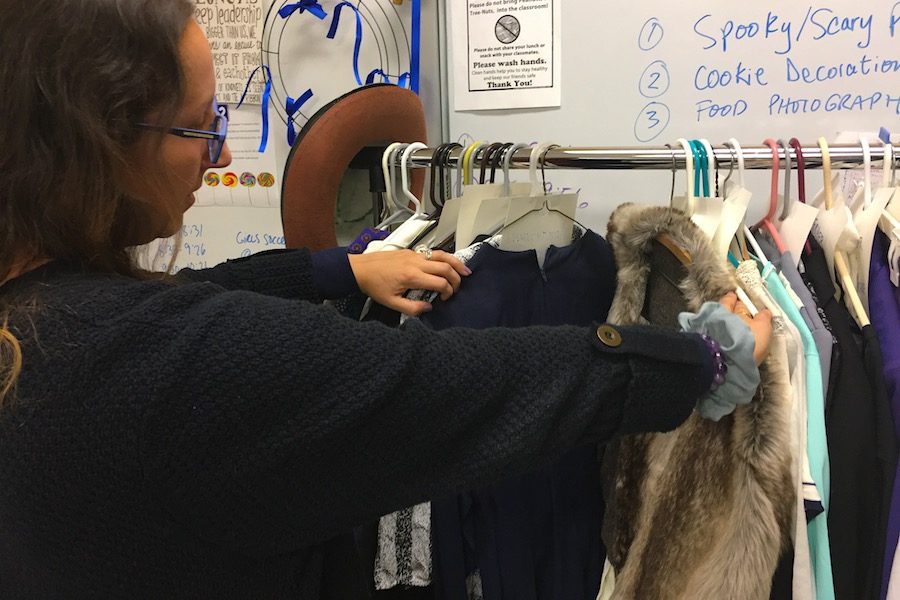 Audra Saunders examining the costumes before the fitting during CavBlock begins. She considers how they look on stage alongside each other. “It’s about showing the personality of the character and really thinking about color as well,” said Saunders.

With Radium Girls coming to Hollis-Brookline High School in a little over a month, preparation is amping up to make the play an absolute showstopper. Audra Saunders, one of the Visual & Performing Arts teachers, has started the costume production process. From planning to fitting to tailoring, Saunders works hard to create individualistic costumes for each character.

Previously working with set design and props, Saunders is very familiar with the behind-the-scenes of theater. Although the materialization of sets and props are quite different from costume design, she draws a major similarity between them: both prioritize the audience’s experience. “It’s about how it looks on stage—always—and how it’s seen in the back row,” said Saunders.

Not only do the costumes have to look stunning to everyone in the audience, but they must also complement each other on stage. “When I’m picking everyone’s wardrobe, I look at color,” Saunders said. “I do want some pops of brighter colors mixed in [as accents, not so much that it clashes]…but not so forced that it looks bland.”

Saunders also wants the costumes to embody the characters. She researched other productions of Radium Girls, costume companies, and scrutinized the script. She cross-examined the information that she gathered and noted the common themes and concepts.

In addition to researching, Saunders asked the actors and actresses for their thoughts on their characters and how they envisioned them being dressed. She said, “[I asked them,] ‘How do you see your character?…How do you visualize them?’”

After collecting the information that she needs, Saunders finds clothes that match the roles. Some costumes involve recycling past years’ attire, thrifting, and creating new attire when needed. Using general sizes that the actors and actresses gave her, Saunders collects and creates the clothes.

Now, Saunders has begun the tailoring process and the Radium Girls actors and actresses visit her during CavBlock to try on the proposed costumes. She works hard to have costumes that fit the actors and actresses well, while also matching their characters’ personalities and profiles.

Oakley Bazemore ‘22, playing the role of the Sob Sister, said, “Everything was fitted surprisingly well…Usually when it comes to costumes, they’re very loose-fitting [and] still have to be fitted, but Mrs. Saunders went to a tee with all of the size measurements…[Furthermore, the costume’s] flash of color is a very characteristic thing for my character…It fits the time period, but it definitely demonstrates how my character is a little bit extra.”

The actors and actresses don’t just get the costume fitted, but they also give their thoughts about the outfits. Cassi Ricks ‘21, playing the floor manager Alma McNeil, said, “I like giving my feedback on costumes, even for not my character…I like seeing how characters are represented in different productions.”

From color theory to sizing, Saunders is committed to getting the costumes for Radium Girls done.