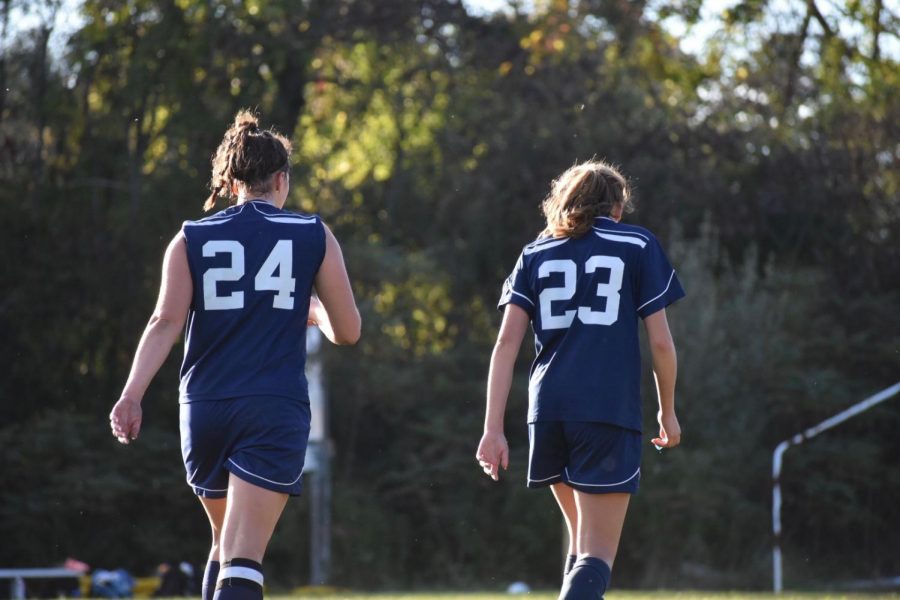 Tasha White and Rachel Brackett heading time the bench after a 2018 game against Souhegan. This is White’s fourth year on Varsity as a senior and Brackett’s second as a sophomore. “We have girls that can play any position and well and that’s not common, it’s great to have a solid team on the field and even on the bench because you never know what will happen,” said White.

During the regular season, the Varsity girls soccer team won 13 games, lost only 1, and tied 2. Now they are on the road to playoffs. Since they are in second place overall in Division II, they got a bye in the first round, moving straight into quarter finals this past Sunday against Souhegan. After winning 1-0, they are now moving into semi-finals on Thursday, Nov. 7, at 4:00 pm, against Bow, at Bill Ball Stadium.

Despite the injury troubles the team faced earlier in the season, they didn’t let it affect them in their overall play. Their goalie, Maggie Crooks ‘23, got a concussion a few games into the season, and senior Christina Balsamo stepped up to play despite not having any goalie background. Balsamo said, “It’s nerve wracking [with] playoffs, going in as the goalie, I don’t want to let in any goals, but it will be fun either way.” She noted that since she has been in goal they have yet to lose a game, and the team has done so well they have only lost one game overall.

The team’s dynamic is a large reason why they can adapt and work so well together. The ability to mesh and adjust to different situations helps them react to anything on the field. Emma Ruvido ‘20 said, “Over the past few seasons we have definitely been a team that gives each of their opponents an equal fight, but the compatibility and dynamics of this team in particular is a very special experience to be a part of. Each and every one of us is so tight-knit both on and off the field.” When asked about playoffs, Ruvido wanted to take it one game at a time, but did say that the team has the potential to make the championship. She thinks that if they play as well as they have been throughout the season, she’s confident they can do it.

The team played Bow back in September, winning 2-0 with goals from Rachel Brackett and Maddie Harley. Bow is in third place overall and has lost only 2 games all season. Tasha White ‘20 said, “I think as a team the hardest games are the most simple games and the games that should be easy wins for us. I think it gets in our heads when they are an easier team so we go into the game expecting an easy win.” That said, White also stated that their best games are against the teams they know will put up a fight, because they go into it knowing they have to give it their all. Their mindset going into Thursday’s game will be an important aspect to moving on to the finals.

Early into the season, It looked like they would be facing a lot of setbacks, with the team seeing multiple injuries in the first few games. But they did something a lot of teams struggle to do, they adjusted and succeeded. White talked about how the team has so many girls who can play so many different positions, which not everyone has.

Despite the setbacks they faced and the hard teams they played, the girls soccer team rose to the occasion and had a phenomenal season that’s not over just yet. In their upcoming playoff game they are looking to give it their all and stay in it a little longer.