Success on the Green 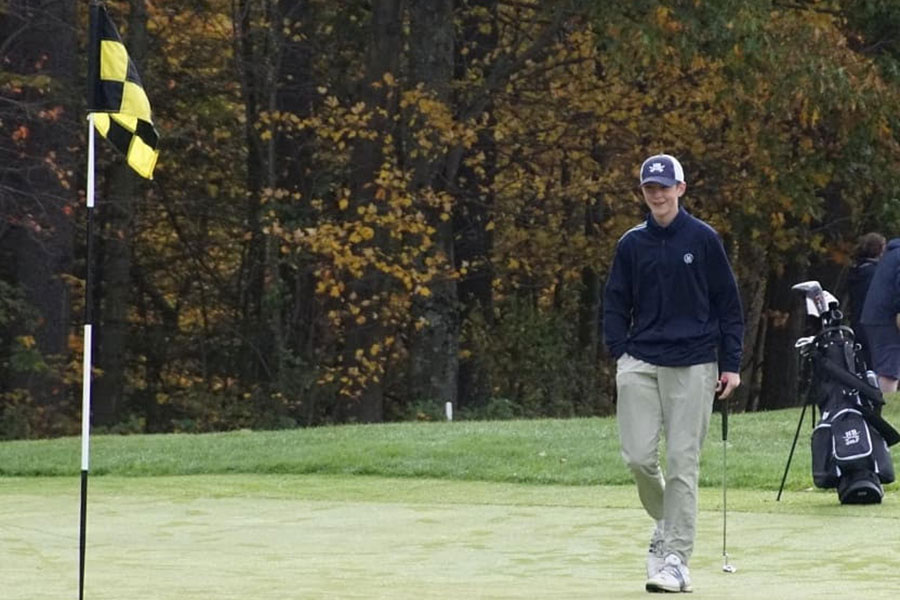 Grady Sturges sets up for an easy chip on the green. He was nervous coming in but calmed himself down as the match progressed. Grady later said, “Representing HB for the state made me feel like I had to represent the team as a whole.”

On Oct. 19, Grady Sturges ‘21 and Aaron Brown ‘20 represented Hollis Brookline in the state golf tournament held at the Beaver Meadow Golf Club in Concord. Competing against cold weather conditions and 16 other golfers, HB’s duo combined for two eventful matches and tied for sixth in the tournament.

Even though both three-year players had confidence on the greens throughout the season, players felt the playoff jitters heading into their matches. “It was a little nerve-racking; there were a lot of people following our group around and I wanted to play good,” said Brown.

Grady Sturges added, “I’d say the pressure of hitting decent shots off the first tee was tough, just because everyone was watching.”

Although Sturges felt nervous heading into the match, having his twin brother Garrett Sturges ‘21 on the sidelines kept him focused. “They scored well in the match. They were close to going to New England’s, so I was definitely rooting for them,” said Garrett, also a third-year player.

As a senior, Brown’s last golf season of his high school career was definitely one to remember, especially as it was his first time in the individual states match. “I had never played in States before, so it was my final chance and last HB round,” said Brown.

He also has high praise for the Sturges brothers to help the team next year. “I think Garrett and Grady could go to States next year. Grady has been doing great all year and Garrett has been right with him. They’re both good golfers and good people; it was nice playing with them,” said Brown.

Everyone who played this year seems to be very excited for next year’s golf team. The players are confident and feel they have a really good shot for the team championship next year, an event that the team unfortunately had to miss this year due to multiple scheduling dilemmas.

“I’m pretty sure we will win the championship next year because everyone who played this year will be seniors and more experienced,” said Garrett Sturges.

With the team’s amount of experience and confidence on the green, next season will definitely be one to watch for the Cavalier Golf Team