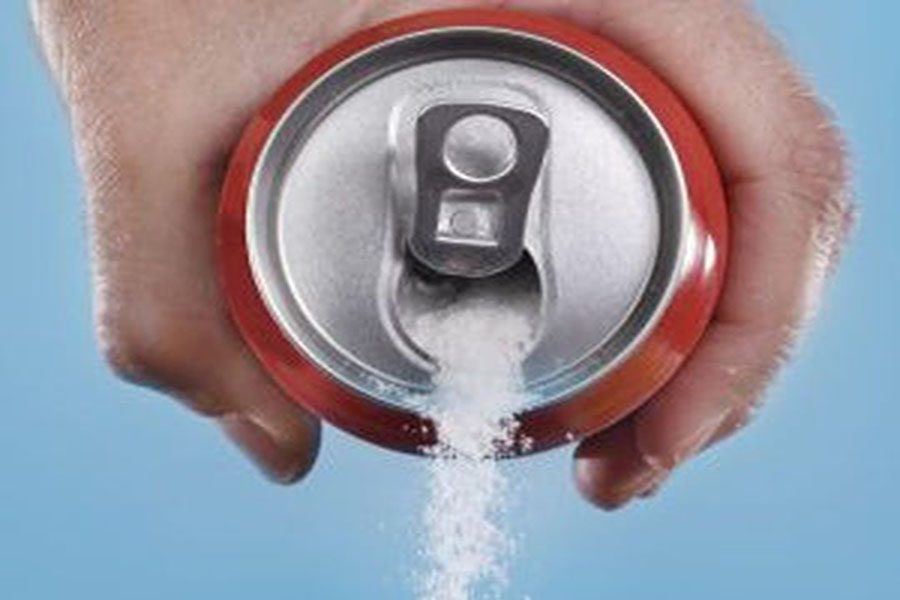 A person is pouring out a soda, but instead of liquid, aspartame is falling out of the can, the same color and consistency as sugar. This shows that people do not know the dangers of aspartame because they cannot see a difference between aspartame and regular sugar.

For years people have been drinking sugary drinks, diet and original, or maybe none at all. According to Gallup, who randomly selected 2,027 adults who were 18 years or older, 24% consume diet, 32% drink regular, and 43% don’t consume sodas or energy drinks at all. Diet drinks and energy drinks are full of aspartame, a chemical sweetener of the aspartic acid family, that causes a person to have neurological problems or temporary blindness. Losing your sight or having your brain not function correctly isn’t what consumers want when they have any sort of drink, especially one they enjoy.

Aspartame is, to scientists, an ant poison. It stimulates an ant’s neural system, making the ant’s body go haywire before finally going limp. Although aspartame can’t kill humans, it can cause temporary blindness and permanent damage to the brain over a long period of time consuming the drink.

This chemical was discovered by a man named James M. Schlatter, who found it by licking his unclean fingers in order to turn a page after an experiment in a lab. Schattler was actually working on an anti-ulcer drug at the time, when he mixed aspartic acid and phenylalanine (two building blocks of protein that happen to be amino acids). He discovered that the chemical had a sweet taste, so he used it as a sweetener in liquids to try and use less sugar and thus help people lose weight.

Surprisingly, over 200 school districts have signed deals with soft drink companies to sell drinks with aspartame. At Coca-Cola factories, the aspartame comes in a 50-55 gallon drums with a picture of a skull and crossbones on it.

“Just because it says it has zero calories and zero fat it doesn’t mean that your sweetener is doing you any favors,” said Candace Hancock, the Foods and Nutrition teacher at HBHS. “And a skull and crossbone to anybody [should mean danger], [even] toddlers, know skull and crossbones mean poison.”

As stated in Gallup’s research, there are around 32% of adults and students that don’t like diet drinks. It may be because they can taste the aspartame, and are able to tell the difference easily. Victoria Lopez ‘20, can taste the aspartame, so she prefers to not consume diet drinks at all. As stated above, 32% of adults and students in high school don’t like aspartame because it leaves a nasty aftertaste in their mouth, and it doesn’t leave them satisfied like sugar does.

There are, in fact, some people who don’t care what happens to their body even if they know what the aspartame does to them. “I think people can do whatever they want and drink what they want but they should be aware of what they put in their bodies,” said Lopez.

People are allowed to consume what they wish, but aspartame is a chemical that takes a toll on your health in the long-term. It may take a while for the chemical to take effect in your brain and/or eyes, and when it does, it might be too late.