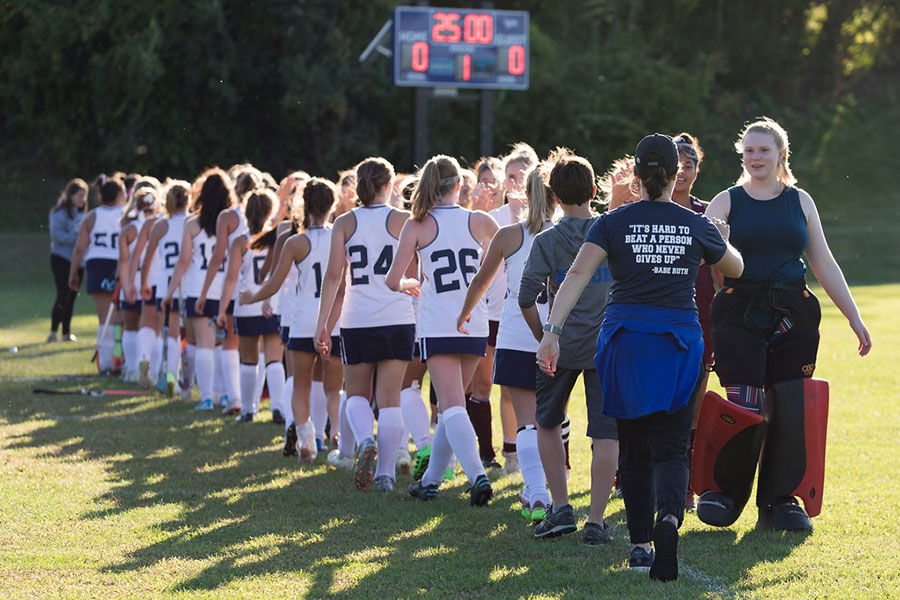 Seniors on the team played their last high school field hockey game on Oct. 17. Lucky to be on such a hard working team, Ogren ‘22 said, “They are all very passionate and enthusiastic about the sport.”

On Oct. 11, the Hollis Brookline Girls Field Hockey team confidently walked onto the field for their game against Pembroke. Both teams, not having won a single game this year, knew it was going to be an evenly matched competition. Determined to break their 26 game, two year losing streak, the girls gave it all they had.  After a nail biting game that was sent into over time, HB walked off with the win.

To gain a better mindset and get a fresh start, the field hockey team received a new coach this year, Allison Bushman, who was constantly spreading positivity and was confident they would win games this season. Although their season record did not wind up the way they thought it would, Sophomore Kaitlyn Castriotta ‘22 said that their team was positive throughout all their losses and never quit no matter what the score was. “As a team, our greatest strength is staying positive in those hard losses, because we would lose almost every game. It was hard, but we stayed strong and never gave up.”

Senior Captain, Lillian Ogren ‘20, also said that the team struggles to not constantly get themselves down about losing. “It was definitely hard staying positive but we would play pump up music and just bonded as a team.” said Ogren.

By the time the girls had already played 11 games they had only tallied a total of three goals with a monstrous 52 goals scored against them. Having only three games left in their season, their hopes of winning a game diminished. The team wanted to prove to everyone that they were capable to win and on top of that, the seniors wanted to finish their last field hockey season with at least one win for the books.

Getting their energy up on the bus ride to Pembroke, when they arrived, they were ready to not only play, but win.  Castriotta ‘22 said, “We had been looking forward to this game for weeks because we knew this was the game that we had the best chance to win.”

When the clock had ticked down to zero, the scoreboard read “Hollis Brookline 2, Pembroke 2,” which meant overtime. Playing one-hundred percent the whole game, Sophomore Allison Wood ‘22 said, “We all just put in a lot of heart and hustle; I think we knew that we could win and were capable, so we just played really hard.” Working hard to get to every ball first, HB had many scoring opportunities within overtime. In the last few minutes of overtime, Delaney Weimer took a hard shot off of a corner that slipped-in past the goalie.

“Once we realized it had gone in, we all started jumping and screaming. We ended up getting into a huge huddle in the middle of the field as the whole team swarmed from the sideline.” said Castriotta.

“We were all so excited. We acted as if we had won the Division 1 championships, we all ran onto the field and were jumping up and down.” said Wood.

“We just finally figured out a way to work together,” said Captain Ogren. The team can agree it was an unexplainable feeling. Working hard at practice and putting in just as much work as every other team had finally paid off.