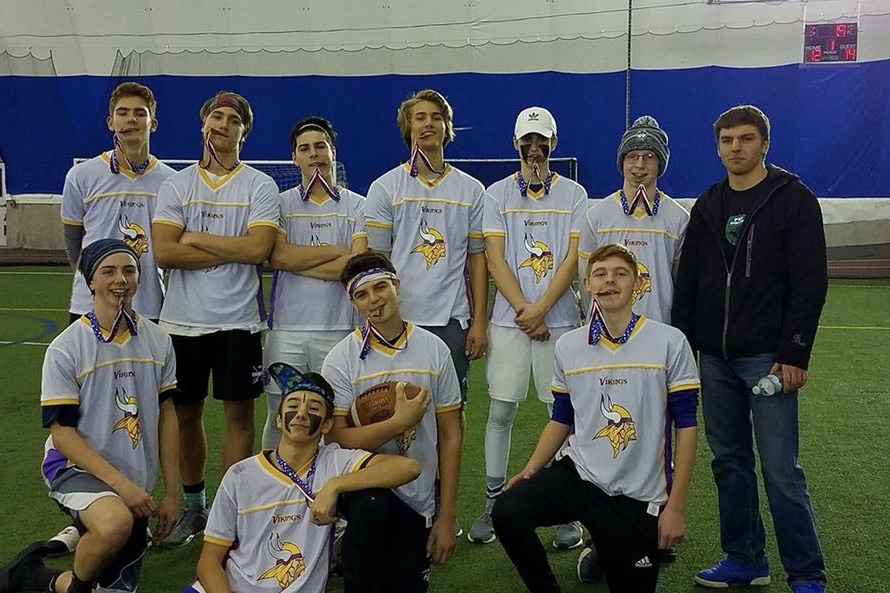 Sports are vital to the culture of high schools all over the United States, and it’s no different here at HB. Football, volleyball, basketball and a multitude of other sports draw crowds composed of students, faculty, parents and more, representing the dedication Hollis-Brookliners have to their athletics. Another sport, though, is quickly growing within HB culture, and it’s not even a school-sponsored activity. This sport is flag football.

Flag football has recently become popularized throughout the country, and it has now made its way to here to Hollis Brookline. With such a sudden boom in popularity, one might wonder what progressed the growth of this sport so much.

The main reason for this advancement in popularity is its ability to serve as an alternative to contact football. Tackle football can be a vicious sport, and the safety hazards within it cause many parents to prevent their children from participating. Flag football, though, allows these kids to play the sport they know and love in an environment that’s safer and therefore more suitable for parents.

The sport consists of two teams with five players playing against each other at a time. Instead of tackling, each player has two flags attached to a belt. To mark the player as “down,” you just have to detach the flags off of the belt. The contact of tackle football is completely removed, allowing for minimal injuries. Flag football is an evident win-win for both parents and children.

Now that we know the reasoning behind flag football’s general popularity across the United States, what is responsible for its massive demand in the Hollis-Brookline community?

Unlike many towns around us, children of Hollis and Brookline have had access to multiple leagues to participate in from a young age. The Hampshire Dome Flag Football League in Milford, NH, and the more recent Southern New Hampshire Flag Football League here in Hollis, NH, provide students with increased opportunity to play the sport.

“I would definitely say it’s more popular in our community. I think that starts from playing at a young age, you know,” said Brian Holroyd ‘20. “Whether it be at recess or after school just getting together with friends, playing flag makes us feel like kids again.”

The opportunities these leagues provide have proven to create bonds that could not be made in  school sports. Flag football is only once a week, which allows it to be a much smaller commitment than any sport at the school. This grants groups of friends the chance to finally participate in one sport all together, and still be able to play their differing school sports at the same time.

“It created a sense of camaraderie amongst peers, and offered me an outlet to release stress with a sport I truly loved. My friends and I that played together on our team through the years had a special bond that simply could not be broken,” said recently graduated H.B. student Mark Labak ‘19.

The minimal commitment flag football requires not only strengthens friendships, but creates them as well. More people are able to play because of this small amount of commitment, allowing for some students who may have never been friends before to create bonds with one another. Nik DiRenzo ‘20 began playing flag football a couple years later than a majority of the other students in his class, so when he began his first season at the Hampshire Dome, he was a bit nervous. Soon enough, he would forget about his nerves, as he instantly created a bond with his teammates.

“Well I’m not nearly as close to the people I play flag with in school as I am when I’m at the dome, and that’s pretty cool because it allows me to be myself. Also, flag is a way I can stay competitive but not be stressed out like the way most varsity sports may stress me out,” said DiRenzo.

It is these bonds that have created the competitive nature of flag football here at Hollis Brookline. Playing alongside your best pals as teammates creates added motivation to play your best. Playing against other students and friends from your own school creates a competitive edge to be the best team at HB. As amazing as school sports are, this is an experience the school can’t provide.

Another benefit flag football provides is access to volunteer work. As more children start to play in the local leagues, more coaches are required to accommodate for them. This allows students at HB to take on coaching roles, from which they can learn valuable life lessons, such as patience and discipline. Working with kids is a great opportunity for HB students to give back to the community through an activity they enjoy.

Mark Labak ‘19 is a perfect example of a student who was positively impacted by this opportunity. Labak coached flag football for three years at the Southern New Hampshire Flag Football league here in Hollis, and the experiences he gained from those years are unmatched.

“Coaching flag has been one of the most influential activities in my life. I wrote my college essay on it. Teaching the kids the sport I love has been nothing but rewarding,” said Labak. “It’s incredible that I can pass on knowledge and create a bond with the younger generation. It’s important for kids to learn the sport and learn the basics of teamwork so they can blossom as athletes.”

Flag football is an essential part of the Hollis-Brookline community, and its popularity is only going to continue to grow. “With the pioneers in place, flag football could absolutely continue to grow, in our community and in any community. It’s one of the greatest sports ever invented,” said Holroyd.