Cavaliers Advance to Championship in 34-14 Game Against Bow 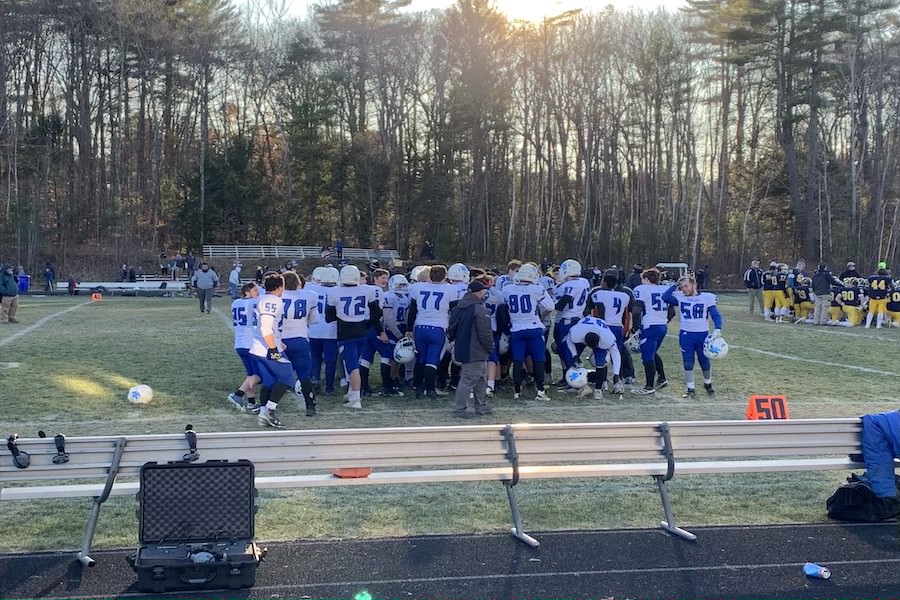 Though it was certainly a cold one out there today, Hollis-Brookline’s Cavaliers showed no signs of slowing down. With a cheerful crowd on their feet and cow bells ringing, it was clear that Hollis-Brookline’s spectators craved this win just as much as the team itself.

Encouraging the football team through thick and thin, Hollis-Brookline’s cheerleaders kept the crowd energized. “We never have people cheering back with us…and this time they [were] into it,” said cheerleader Julia Frugard ’20, “we totally came into this not expecting to do so well [since Bow] was undefeated.”

The score was 20-14 at halftime and though the Cavaliers were only 6-points ahead of their competitor, many supporters could feel the win on the horizon. The senior student council Vice-President and staunch H.B. football supporter, Henri Boudreau ’20 said, “It’s going to go down to the very last couple of minutes, but looks like a good day for Hollis-Brookline so far.”

With only one-minute and 33-seconds left in the fourth quarter, the Cavaliers scored one final touchdown and field goal bringing them to their final score of 34-14. A celebrative roar arose from the crowd.

Shortly after the game we caught up with the Cavalier’s Linebacker Salvatore Fabbio ’20. He was noticeably enthusiastic and proud of his team’s performance whilst entering the main building of Bow High School by stating, “I feel like we did pretty dang well, because you know we’ve been talking all this time about being the best of the best, and Bow came into this game 11-0, and we just showed out for it.” He then said , “we [the Cavaliers] said if we weren’t perfect or near-perfect, we weren’t going to show out, and you know what, we were perfect today.”

The NHIAA Football Championship DII will be held next Sunday, November 24 at 2:30 at the Wildcat Stadium in Durham, NH against Plymouth Regional High School.