What’s the deal with Black Friday? 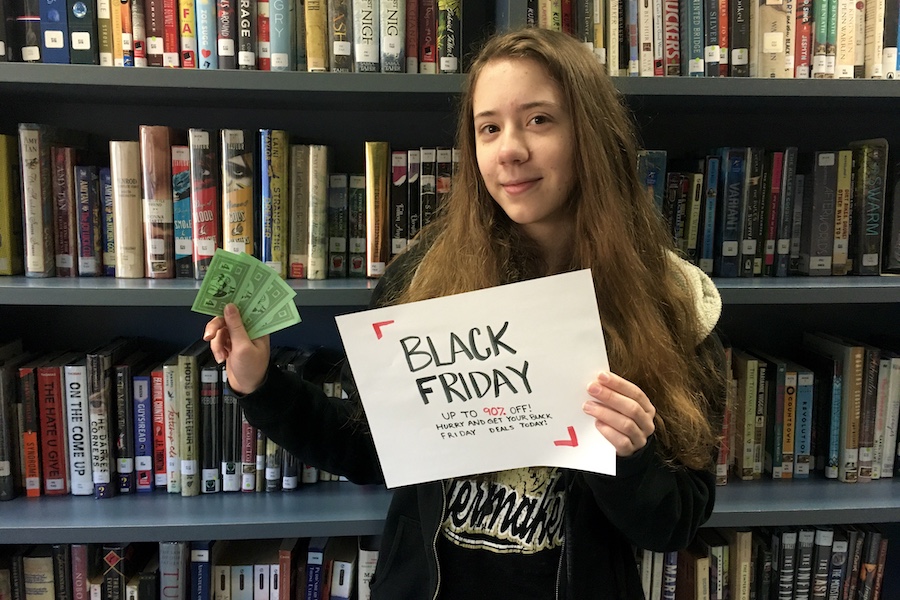 Stores boast high savings on Black Friday to entice consumers into buying more. Small businesses lose out from holidays like Black Friday that promote large corporations that can afford to significantly markdown their produces, which ultimately draws in more revenue if they’re successful. “It’s [mostly just] big businesses trying to go out there on Black Friday to get extra sales,” said Jade Weaver ‘21.

One of the most chaotic days of the retail calendar and an anticipated “holiday” for large corporations, Black Friday, is impending. This money-maker holiday is well established in American culture, but contradictory to its unfathomable markdowns, Black Friday is infamous for its shortcomings.

Its name referencing the crash of the U.S. Gold Crash of September 24, 1869, this capitalized holiday is far from true to its origins, as described in Sarah Pruitt’s “What’s the Real History of Black Friday?” After the crash, two financiers, Jay Gould and Jim Fisk, attempted to increase the price of gold by purchasing as much gold as they could. On that Friday, the public became aware of the crash leading to the fall of the stock markets and bankruptcy to people all over the country. Thus, this financial crisis was dubbed “Black Friday.”

Unrelated to the origin of its name, Black Friday would later be used again to reference an annual Philadelphian craze. In the 1950s, Philadelphia police would have to be on high alert the day after Thanksgiving to patrol the chaos created by the annual Army-Navy football game held every Saturday after Thanksgiving. Because of the huge influx in traffic and crowds, the police were not allowed to take the day off and had to work longer shifts–strikingly similar to the modern-day adaptation of Black Friday.

Adding to the chaos, many shoplifters would take advantage of the frenzy and steal products from stores in the area. Stores would struggle to handle the shoplifters as the police officers’ schedules were already tight. However, in the 1980s, shop owners redesigned the holiday to better benefit them and discourage shoplifting. Popularized by its “great” deals, it was quickly absorbed into mainstream American culture.

Since its origin, Black Friday is not only plastered all over calendars, social media and stores, but  also fueled the start of another holiday: Cyber Monday. With having such an immense presence in corporations, it would seem like it’s a generally well-liked holiday. After all, who could resist a 50% markdown on a pair of shoes that you so desperately need to replace your current, weathered pair?

Yet, that pretty markdown isn’t all that it is cracked up to be.

The concept of saving cash is so enticing, that companies use it to tempt people to buy their products, even if the price is still high after the sale. “[It] force[s] people to go shopping to make them feel like they’re getting the best deal, even though it might not be the best deal,” said Audra Saunders, one of the Visual & Performing Arts teachers.

Even if the sales are alluring, most people end up with more than what they need or had gone to buy in the first place, counter-intuitive to shopping cheaper, which the entire holiday is marketed for. “Most of the time they [shoppers] might be getting one thing, but then they end up with a cart full of junk,” said Saunders.

Furthermore, with enormous crowds swarming stores in order to attain “cheaper” products, extra pressure is put on retail workers. The closing hours are extended and work shifts are elongated for employees, while they deal with riled, coupon-hungry customers. “[Customers] are a lot more likely to make a mess of stuff and break stuff. The lines also get really crazy…[Not only is it more hectic on Black Friday, but my work is] open later…until 12:30 a.m., whereas we normally close at 9,” said Jade Weaver ‘21, a Michaels employee. “[Sometimes, the holiday is even harder than normal] if people are quitting or leaving their job [because] it puts a lot of stress on other workers who have to cover those shifts.”

This manic atmosphere is not only notable by store employees, but has become a staple for Black Friday. “I don’t like the side of humanity that it shows everyone literally fighting for material objects. Clearly, to the point where it’s resulted in some deaths,” said Kaitlyn Ferdinand ‘21.

“Along with that, it’s just an excuse for people to be violent over a toaster oven or something not worth it. It’s dangerous to people, the parking is horrendous, the traffic is horrendous, and the retail workers are suffering endlessly,” Weaver said.

Not only is Black Friday infamous for its chaos and stress on workers, but it favors larger corporations over small businesses because they are able to provide seemingly better discounts. “[Small businesses] can’t compete with [large businesses] because the [larger companies’] markup is so high that the markdown looks great,” said Saunders.

Black Friday, born out of good intentions to improve a poor corporate situation in Philadelphia, is now notorious for its innumerable flaws. It’s a misleading holiday that wreaks havoc for consumers and employees alike, while only truly benefiting the higher-ups in large corporate companies.