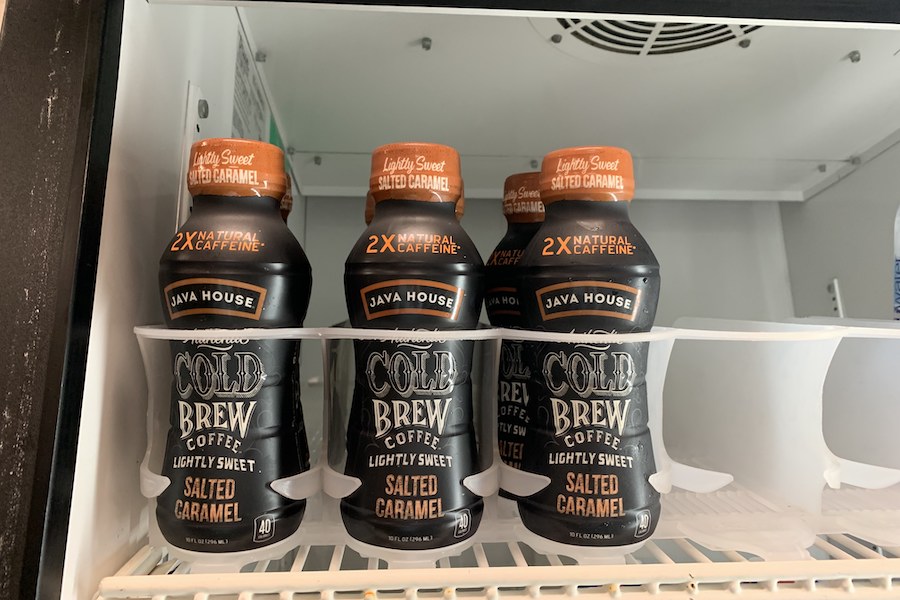 These drinks are new additions to the Hollis-Brookline High School’s cafeteria. The Ice caffeinated drinks and cold brew coffee have been flying off of the shelves for the past two weeks. However, according to King, the Snapple that has been offered contains caffeine as well.

Beginning in the 2019-2020 school year, there are new drinks that line the shelves of the refrigerators in the cafeteria. These new drinks consist of  Ice’s sparkling caffeinated drinks, as well as Java House’s cold brew coffee. As soon as they are stocked, the drinks are sold out, selling out within one to two days. Why was there such a sudden introduction?

Last week, Java House Cold Brew Coffee was added to the selection of drinks in the cafeteria. According to Megan King, a food services employee, “[The drinks] are very popular and blew out within a half hour.” With the introduction of more caffeine in the school, there has been an influx of students wishing to purchase such drinks.

“I just ordered six cases, and they are already gone,” said King. The cases had come in on Tuesday, and were sold-out by Wednesday. But how much caffeine are we really getting?

According to the U.S.D.A. Food and Nutrition Services, there are nutritional standards that all foods and drinks that are served in a public school must meet. These include á la carte foods, vending machines, and lunches. These rules limit the amount of caffeine a student can have. The average adult can consume 400 mg of caffeine a day safely. These bottles of cold brew in question consist of anywhere from 180 mg to 200 mg of caffeine. Some students consume multiple coffees a day. Allowing such proportions of caffeine to be readily available to teenagers could be detrimental. With caffeine having a strong impact on the brain, public doctors are feeling that it may impact the central nervous system and behavior more than what is known.

Many of the kids have felt the addition of caffeinated beverages is a great addition to the school. Jade Weaver ‘21 has purchased almost every type of caffeinated drink available to her at school, and she feels that the entire idea is a great way for students to get an extra kick.

“With the early start time and all of this work, it gives us an extra boost to get through the day,” said Weaver, “I would very rarely [buy something from the cafeteria]. I would buy a bottle of water if I was really thirsty.”

According to Hannah Brown ‘21, these new drinks are not a good option. Brown said, “No, [I wouldn’t buy them], since water is a healthier option.”

Does caffeine in school impose a  positive influence academic performance? “I don’t think that they do…They could push a student through a class if caffeine helps then in that way. However, caffeine only lasts for so long, you’re going to crash,” said Brown.

Caffeine is temporary, and, while the goal of adding these was to find something comparable to Dunkin’ Donuts iced coffee, caffeine is not the most beneficial way to obtain energy. Students have become dependent on coffee, and do not see the downfalls of the substance. To allow access to the caffeine is not beneficial to the developing teenager.