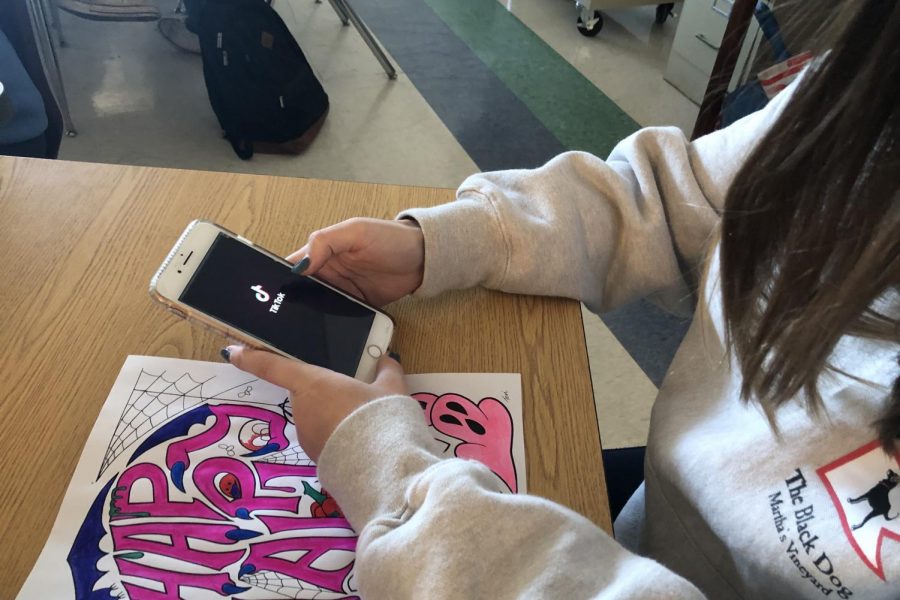 A Hollis-Brookline student uses TikTok during class instead of paying attention to the lecture. The social media app has teens all over the world distracted from their daily activities, such as school, homework and jobs. “I spend one to two hours every day,” said Peyton O’Connor ‘20.

It all started as a joke. This new TikTok app seemed so stupid that everyone needed to download it to have a taste of what it was all about. Unfortunately, though, once the download occurs, there’s no going back. The addiction starts by watching a couple TikToks on the renowned “For You” page, which users think comes with no commitment since they’re just trying the app out. Next comes the creation stage, where users begin to fall into the trend trap. They begin using the most popular sounds to create their own masterpieces, because hey, one can’t hurt. Then, the urge to create more and more emerges, along with the impractical hope of becoming famous on the app. It’s at this point in which users become addicts, as they fall into the inescapable abyss of TikTok obsession.

Nobody saw the TikTok takeover coming. Just about everyone downloaded the app to compare it to that of the gone and forgotten Musical.ly. The problem with the former social platform was that it appealed to a much younger audience than its developers at first intended, which ultimately led to its failure. The failed app went from a platform for singers and dancers to an abundance of lip syncing, clout chasing teens. Musical.ly was a similar app to that of what TikTok is now; in fact TikTok is actually made from the same creators as Musical.ly was. The tech giant, ByteDance, merged with Music.ly in order to create a better, more entertaining app, which eventually became TikTok. Tik Tok is Musical.ly rebranded and revamped, but it’s still a social media platform that portrays a feed of short, user-created videos. The faults of Music.ly come from the urgency of putting out an app that is similar to the beloved Vine.

At the beginning of 2017, a huge part of many iGen’s childhood was taken from them. Vine was removed from the App Store, leaving dependent users empty-handed. This prompted a race to publish another app which could fill the void that Vine’s appstore departure left, and create a lucrative chance at that. The world needed a new Vine, but something ever so different. This app became TikTok.

“I do think some of its popularity comes from people missing Vine, especially because of how Music.ly didn’t work out,” said Teresa DeMaio ‘20, “They revamped it and now TikTok appeals to a much larger population than Musical.ly, which seemed like it was for younger people.”

Now TikTok is booming and people are loving it, but maybe a little bit too much. The app has people spending hours upon hours glued to their screens, watching the latest jokes and trends its “TikTok celebrities” have to offer. “On weeknights, I’d say I spend about an hour [on the app], but during the weekends it could vary up [from] two to four,” said DeMaio.

The latest and most popular jokes can be found on the “For You” page of the app, which serves as its feed. The page compiles popular TikToks related to your interests and other videos you’ve liked all onto one never-ending scroll cycle. It does what one would expect, find the videos “for you,” which leads to people watching a variety of different types of videos that appeal to them.

“I mainly just scroll through my “For You” page. Sometimes I watch my friends’ TikToks,” said Peyton O’Connor ‘20.

The most popular types of TikTok are dancing videos, which have created many trends that other users like to pick up and try for themselves. “I usually watch the ‘For You’ page. I’m not really a fan of the e-boys, so I skip through them a lot. I’m also not a fan of the cooking ones or any of those, so usually I like to watch the dancing ones,” said DeMaio. These dancing and humorous videos are the most popular, but some people, like Jason McIllwrath ‘20, see other appeals in the flourishing app.

“ [It’s] pretty much all I watch because occasionally you find a nice, funny gem in there you can share with your friends,” said McIllwrath, “But the main appeal is the attractive women.”

Since the app is still in its early stages, there aren’t many TikTok celebrities just yet. Of course there are people who are currently rising to stardom on the app, like Charli D’Amelio and Lil Huddy for example, who are most popular for their choreographed dancing videos, but the chance for any video to blow up is very much apparent.

“Anyone can get famous! It’s just a regular person like my friend Peyton O’Connor. She became somewhat famous in one TikTok. Anyone can share what they want to share, and it’s really not filtered much,” said DeMaio.

This opportunistic feeling for a chance to become a famous “TikToker” is apparent everywhere, and Peyton O’Connor of Hollis-Brookline may be inching closer and closer to her breakthrough on the app. O’Connor is a creator on the popular platform and has used a variety of different sounds in order to put her own spin on some of the most popular trends. “You can kind of take it and run with it. You can use any sound you want, you can make your own, or you can use other people’s ideas and add your own twist to it,” said O’Connor.

Could TikTok be giving its users too much false hope, or is it really an equal playing field for anyone trying to become famous? Only time will tell, but for now, enjoy the app and go along for the exciting ride that TikTok surely has in store.