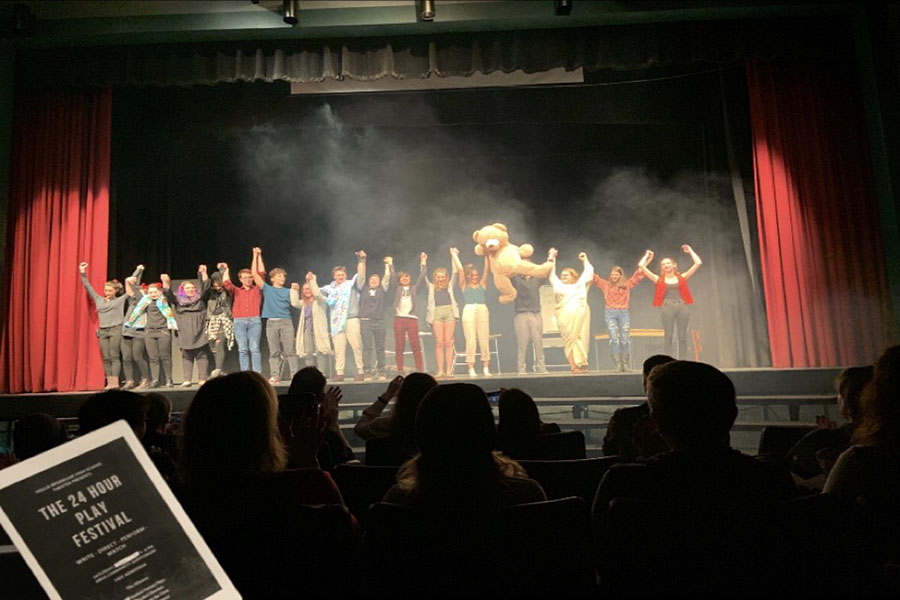 The participating students at the end of the festival come out on stage to bow and receive a generous applause from the audience. “The cool thing about the [show] is that you can do it three or four different times and have a completely different role every single time, it’s good for perception switches and there’s a lot of stuff [ that the students] can do,” said Producer Matthew Barbosa.

The final HB 24 hour play festival of the school year happened on January 4. With three shows total rounding out to about fifteen minutes each, those who participated this year are proud of the exceptional turn out.

In case you’re new to the whole idea: the 24-Hour Play Festival involves a group of student writers getting together the day before the event and putting a script together. “The 24 hour play festival is a celebration of students’ commitment to the theater program and also a display of their ability and grit,” said Student Director Hayden Wink ‘21. Students who act, direct, set up the stage and engage in tech make everything happen a time period of just one day. This is when the madness initiated.

At eight in the evening on Jan. 3, a Friday night, a group of writers got to work at home, dedicating their night exclusively to create an original production. The writers are then given actors and have the freedom to write their stories however they want. This year, there were a total of three shows, each about 15-minutes long. After writing and planning all night, writers get the chance to sleep.

Next, the directors arrive at Hollis Brookline High School in the morning and meet with performing arts teacher, Matthew Barbosa, to read through each script and pick which they’d like to turn into a play. “[Directors] don’t know who wrote [the script] either, they’re just going based off of the merits of the show and how that fits their strengths or weaknesses as directors. Then they have from nine to four o’clock structured between three separate rooms to do whatever they need to do to make their play successful,” said Barbosa. Then actors and crew members arrive and chaos begins.

To put in perspective, all that needs to happen in less than 12-hours; actors then have to memorize their scripts and actually become their character, a process that should take much longer than the time they are given. Sets have to be designed and assembled, costumes have to be put together. Directors create blocking, which entails planning out the precise movement and positioning of actors on a stage in order to facilitate the performance. Light and sound cues then need to be decided upon by the play’s creator.

Tech rehearsals begin, taking place in the auditorium towards the end of the day, where everything finally comes together in a few hours:it’s a lot of pressure compacted in one day. What would usually take months and months of planning all has to be done in a matter of 24-hours, hence the name. Yet somehow, the students of H.B. managed to make the last 24-hour play festival of the school year a memorable one.

The festival is a great way for students interested in getting involved in theater to try it out. “The 24-hour play festival is open to anybody regardless of experience level or grade levels as long as you’re in highschool, that’s kind of the whole point for the whole festival, is to get underclassmen who maybe specifically they’ve auditioned for roles on our main stage shows  but because of their lack of experience or nerves they didn’t make the cast,” said Barbosa. It’s a chance to give amateur actors more confidence and experience for the drama department’s main stage shows.

Starting off the night was Ruby Red Detective written by Caitlin Treacy ‘21, and directed by Emma Latanision ‘21, assisted by Crew Chief Iv Rockwell ‘23. The play takes place in our very own town of Hollis, where student Ruby, played by Sofie Stoll ‘21, is giving new student Sam, Nat Brown ‘20, a tour of the school. “[My play] was about a detective  who got hired by a corporation called COS-CO and then later found out that cooperation was evil,” said Stoll. An interesting take on a spy story, this play succeeded in having both humor and serious elements at the same time.

The second play of the night, titled Dreamworld was a deep story about the character Sophia, played by Abby Hoffpauir ‘23, who travels through a series of mysterious dream worlds. Sophia collaborates with her book character, Maya,Natalie Liston ‘23, and Athena,Cassi Ricks ‘21, to get Sophia back to the “human realm.”  The most serious of the three, this play took an interesting turn and executed the complicated plot successfully.

Dreamworld was written by Mia Karlsson ‘22, assisted by Crew Chief Katie Hersey ‘23, and was directed by Hayden Wink, who has “been in four festivals. To make the festival successful, you need to have a lot of patience.  First off, it’s really challenging to do the things the actors writers and directors do and you need to stick with yourself and your own talent until you can reach the point where it’s a good play,” said Wink.

The last play of the night was written by Alex Shutt ‘22, and directed by Jack Young ‘20, with Crew Chief Rayna King ‘23. The Magic of Learning follows a mortal teacher, Mr. Lameson, played by Ayden McCrea ‘23, who unknowingly substitutes for a school that studies witchcraft. This play spread laughter all through the crowd, with jokes being cracked throughout the performance.

“My play was a comedy and I wanted to write about someone who’s completely normal almost as if they just they kind of stepped into the world of Harry Potter or Lord of the Rings and it’s like ‘oh I don’t know what any of this is I’m just a regular guy’ humor is a kind of fish out of water type thing,” said Alex Shutt. One memorable character was definitely Christoph Spine-Ripper, played by Hayden McSeveny ‘23, who also managed to play two other, completely different characters as well. Along with Chris, Mr. Lame was in charge of two other students, the pessimistic Dameon Phoenix, played by Izabel Scanlon ‘23, and the ambitious Esmeralda Blaze, played by Molly Peters ‘23. This was the only show of the evening with an all-freshman cast.

The 24-hour play festival is another way that Hollis-Brookline is able to show off the true artistic talent that’s contained inside this school. “It’s really good for people just getting into theater, because you get a chance to try out and see if you enjoy the role that you signed up for, or maybe a role that you want to do and see if you have what it takes [to be in theater],” said Shutt. The last show of its kind for the school year was definitely a hit with an audience thoroughly amused by a troop of talented actors, directors, and writers.