A chance for a miracle 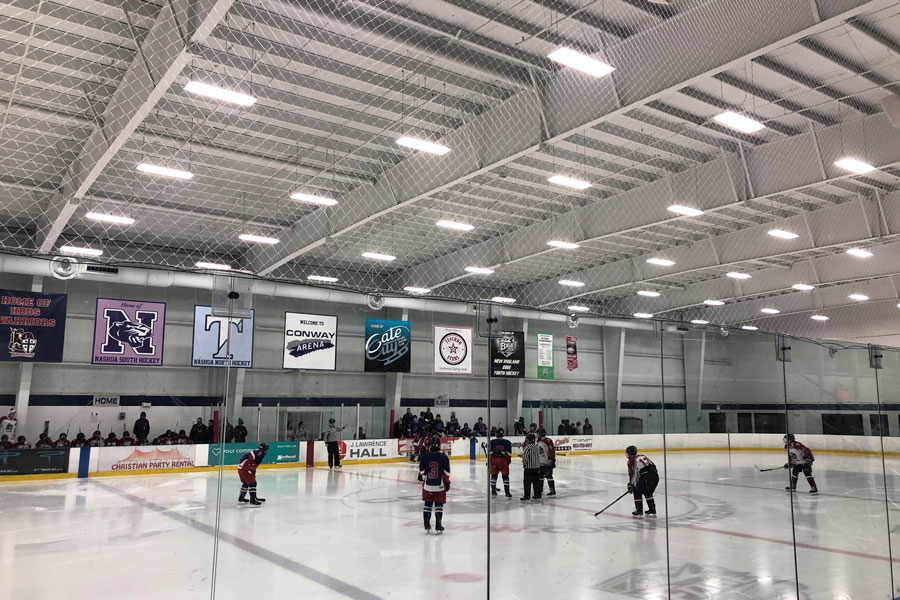 The Hollis Brookline-Derryfield Hockey Team meets Laconia-Winnisquam-Inter-Lakes at middle ice to face off for the start of the game. The rest of the game went easy after HB pulled through for a 5-1 win. “I’m happy to be on this team, we are a good team and have high hopes,” said captain Sal Vella ‘21 after the game.

The Hollis Brookline-Derryfield (HBDS) Hockey Team is starting the season strong. The team has obtained a 4-1 record in which they’re averaging about 5 goals per game. The team is solid, from its attacking forwards to the defense behind them, the team has what it takes to potentially go for the championship this year.

In a recent ranking set by the NHSportsPage, the HBDS Hockey Team was predicted to place first for division three. These high hopes could possibly derail a team mentally, but defenseman Joey Oetjens ‘21 seems to be ready for it. “I wouldn’t call it stress per say, but there are definitely expectations. And we talk ourselves up among the school, too. We definitely want to be able to show people not only at our school but also our competitors, what we’re made of and show that we really are a threat,” said Oetjens.

Aside from taking the stress off of possibly becoming the champions of the league, the team still has their eyes on the prize. “I’d be lying if I said we didn’t have as good of a shot as anyone else,” said Oetjens. “I mean we have more depth than just about any other team in the league. We can run three really good lines off offense and two really good lines of defense, and I feel like we have the best goalie in the league being Chris Slater, so I really don’t think anybody could stop us.”

Colin MacDonald ‘21, center for the team, also chimed in on the possibility of winning the championship. “One hundred percent, I think there’s absolutely no reason for us to not win the ship. We have the team, we have the effort, we just got to pull through,” said MacDonald.

While MacDonald, starting center for the team, sees the goal in sight, he still feels the outside pressure. “It feels like we got some big shoes to fill like we got these big expectations and we got to live up to them. It puts us in the spotlight a little more than we have in the past years which is a good thing,” said MacDonald.

The team has high hopes for the championship this year, but captain Sal Vella ‘21 believes there’s a lot of tough competition ahead of them. “John Stark is a tough team, very good squad, they have a lot of depth and one of the best players in New Hampshire, so that’s always a threat,” said Vella.

John Stark has also come out of the season red hot. The defending champions have currently obtained a 4-0 record and have averaged just over 6.5 goals per game. John Stark is looking like a real contender themselves, with the best player in division three paired with loads of bench depth. HB and John Stark have two games this year, a home game a piece, which aligns for some interesting games in the up and coming weeks (Feb. 1 at John Stark and Feb. 29 at home).

All in all, Hollis Brookline-Derryfield’s Hockey Team is looking good and excited to have their season up and running. Hopefully, we will be checking back with the team as champions at the end of the season.