The effects of the devastating Australian fires 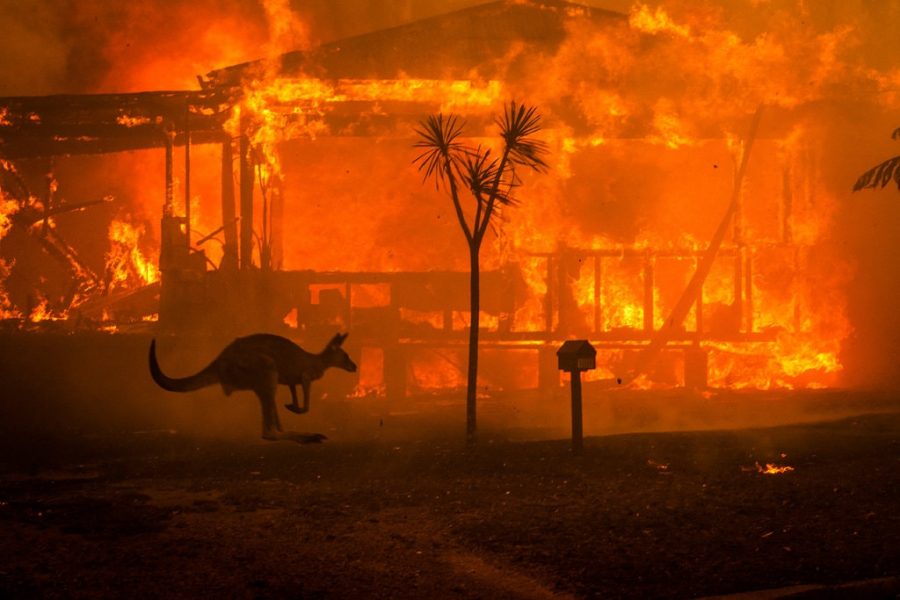 A kangaroo is seen running past a house that is engulfed in flames. The destruction in Australia has displaced both people and wildlife in New South Wales and Victoria. “Some areas will never recover from the destruction,” said Rodney Clark.

Currently, a heart-breaking event is spreading throughout the southern portion of Australia, destroying peoples’ property and animals’ habitats. This all started in Nov. when a tragedy occurred within the country. Lightning struck the states of Victoria and New South Wales, causing a wildfire to break out, resulting in the current damage of peoples’ private property and the ecosystem, as well as the displacement of entire species of wildlife.

The recorded destruction is catastrophic, as more than 900 homes have been destroyed, and nine-million acres have burned in New South Wales. Meanwhile, even more damage is reported to have occurred in Victoria.

Wildfires, such as the many in Australia, can have devastating long-term and short-term effects. One of the major consequences: the destruction of ecosystems and the wildlife which inhabit them. Current fires have resulted in the deaths of  millions of animals, and many more have been rescued in attempts to save them from the flames.

“Animals have been greatly affected by the wildfires, and some species will never return as a result,” said Jennifer Shreves, the A.P. Environmental Science teacher. Depending on the amount of damage that the wildfire has caused, whole species could potentially go extinct. However, there are survivors who will recover from the destruction over time. Residents of Victoria and New South Wales are trying their best to save the animals endangered by the fire by moving them to other areas and in some cases, dogs are being used to shepard these animals away from the danger.

Another major consequence of the wildfire is the pollution of air in the surrounding areas. When a wildfire burns, it releases carbon dioxide and other harmful chemicals into the air, depending on what it has burned. In Sydney, heavy smoke has blanketed the region, and has even travelled to places as far away as New Zealand. This heavy smoke has affected air quality, which makes it harder for residents to breathe. This can be detrimental to those who already have pre-existing breathing problems such as asthma.

“Air pollution is a huge problem, as it can spread to other areas, not just to the [affected] area,” said Austin Johnson ‘20, who is concerned about the effects of climate change in the world. When the smoke and other gases leave the affected area and drift to different parts of the world, the effects of global warming can be felt on a stronger level.

So how can governments try to prevent wildfires in dry areas in Victoria and New South Wales? Authorities have already started to clean up the situation.

“Many have started burning items to stop the spread of the wildfire,” said Shreves. “But when the rains came in, it made this [effort] more difficult.” Residents of Victoria and New South Wales burned their belongings and anything in the path of the wildfire in attempts to slow its spread or to stop it altogether.

Another way that the authorities have tried to deal with the threat of wildfires is to get rid of all the hazardous items that could easily spark up another wildfire.

“The destruction will cause the government to regulate how dead wood will be regulated, to prevent a lightning strike from causing another fire,” said Rodney Clark, the Science Department Head at HBHS. Clearing away deceased natural growth and other flammable objects will help to decrease the risk of fire.

The fires in Australia have caused other wildfire-prone nations, such as the U.S., to take steps to ensure their communities will be safe from impending disasters. This event also recognizes that individuals should be careful with their environment, as global warming (with a contribution of high heat and drought) was a major cause to the widespread damage in Australia. If governments don’t take action after a wildfire has been reported, another disaster like this one may occur.