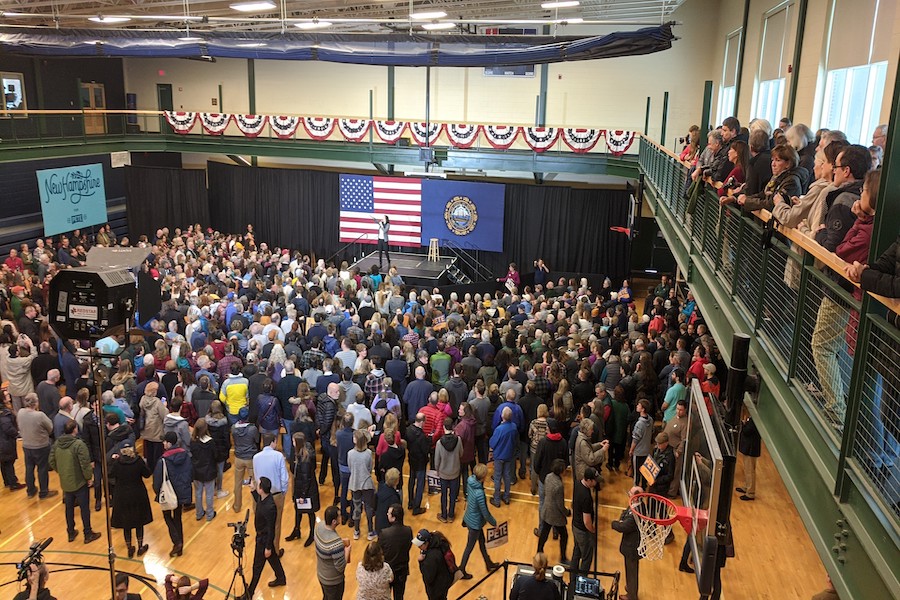 The college gym floods with people as they wait for candadite Pete Buttiegeg speaks.“I am here today to see and hear Pete in person, and to see if I like him,” said Hollis resident Lee Hill.

On Sat. Jan 11, candidate Pete Buttigieg held a campaign rally at Nashua Community College. With the doors opening at 11:30 am, the line wrapped around the building as people eagerly waited to be checked in by campaign volunteers. People crowded into the college gym with various Pete signs and buttons. As Buttigieg entered the stage, people cheered, sharing their excitement for the young presidential hopeful. Many people were there to support the candidate, or there to see if they even liked him, while others were protesting abortion rights, one of Buttigieg’s planks, outside the building,.

Buttigieg’s speech was focused around uniting Americans through patriotism and nationalism. Buttigieg also focused on current events such as the Iranian general, who  the US military ordered to kill via drone strike. “Patriotism is not militarism,” said Buttigieg, who was in the U.S Navy himself, “[patriotism is not] the chest thumping president, who throws himself a parade, or even worse who thinks it’s somehow pro-military to overthrow military justice and pardon a war criminal, like there’s no difference between a war fighter or a criminal.

Buttigieg talked about how he would handle the recent situation with Iran by involving the Legislative branch in matters of conflict, so the American people can be involved and think about the consequences of actions on foreign soil.

The candidate continued to relate patriotism to all of his planks such as immigration laws, gun violence, LGBTQ rights and education, appealing to the younger people in the crowd. Buttigieg then incorporated how the United States can no longer be a country filled with hate, but accepting and filled with love.

The candidate lightly touched on each plank, but didn’t elaborate with  his processes on how he would tackle each issue. On the campaign’s website, Buttigeig does describe his take on 24 issues and how he is going to address them, along with why these causes are important to him: “We are living through a moment of huge upheaval, but also of great opportunity.”

Luckily for New Hampshire, many candidates come and speak all over the state due to its first in the nation primary status. Hollis resident Lee Hill thinks it’s important for candidates to come to New Hampshire. “New Hampshire is a very weird state demographically, I don’t think that we would have this opportunity [if it wasn’t for the primaries]. We are a really small state, we’re not diverse in any way and the chance we have to see all the candidates that we have week after week, we wouldn’t have those,” said Hill. Because New Hampshire is a swing state along with being one of the first states to vote in the primaries, the  residents are able to see candidates in person to truly decide for themselves who they want and don’t want to support, instead of reading potentially biased news articles that may promote a particular candidate.

As the primaries become closer and closer, more and more candidates are coming to New Hampshire to speak, trying to get as many votes as they can. Only after Feb. 11, will leading candidates like Buttigieg find out if they left their mark on New Hampshire.