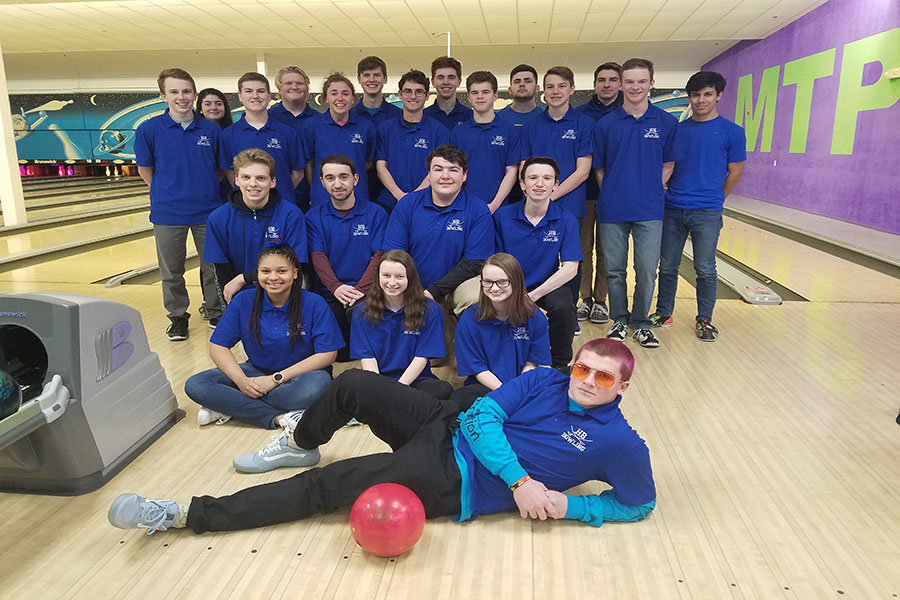 The bowling team poses after a competition. Many members of the team have been together since freshman year. “I’ve coached other teams, other sports, and the team was really good but they didn’t get along and we didn’t win,” said Coach D’Attilio. “I’d rather coach a team like this that gets along. And to boot, they’re also winning.”

The Hollis-Brookline Bowling Team has grown into a large family that has continued to grow in popularity year-after-year. The team consists of 23 students, with a Varsity and Junior Varsity team. Weekly meetings at the Merrimack Ten Pin consist of both teams partaking in some serious training and competition.

So far this year, HB’s bowling team has had a great run, winning three out of four competitions. Together the team has a score of two-thousand points, which averages out to a score of over 200 points per student bowler. In bowling, achieving a score of 170 is easier, while two-hundred can be extremely difficult to score. A score of three-hundred is a feat almost impossible to accomplish. The difference between a score of 200 and 300 is only a couple of pins; however, that’s easier said than done.

The scoring for a bowling meet is much different than how scoring works in other sports. Each teammate plays two games each, and they all have their own individual scores. “Based on how many pins you knock down, you get ranked with the other teams that are at the meet,” said Coach Robbins. During one game, HB student Nicolas Vahe ‘20 bowled a perfect score of 300, which is very difficult and almost unheard of in high school bowling. “It’s like pitching a no-hitter in baseball,” Coach Robbins said.

Nic Vahe, Jake Webb, and Ben Lafontaine are ranked among the top bowlers in the state. “Our team bowls like a family. It’s clear to see at the meets that we all care about each other and want each other to be the best that we can be. No other team can compare to the energy that we have,” said Jake Webb ‘20. Webb is an avid bowler who has been a member of the school’s team for four years, as well as other teams in the off-season.

HB is currently ranked first and has their next competition on Saturday, Feb 1.