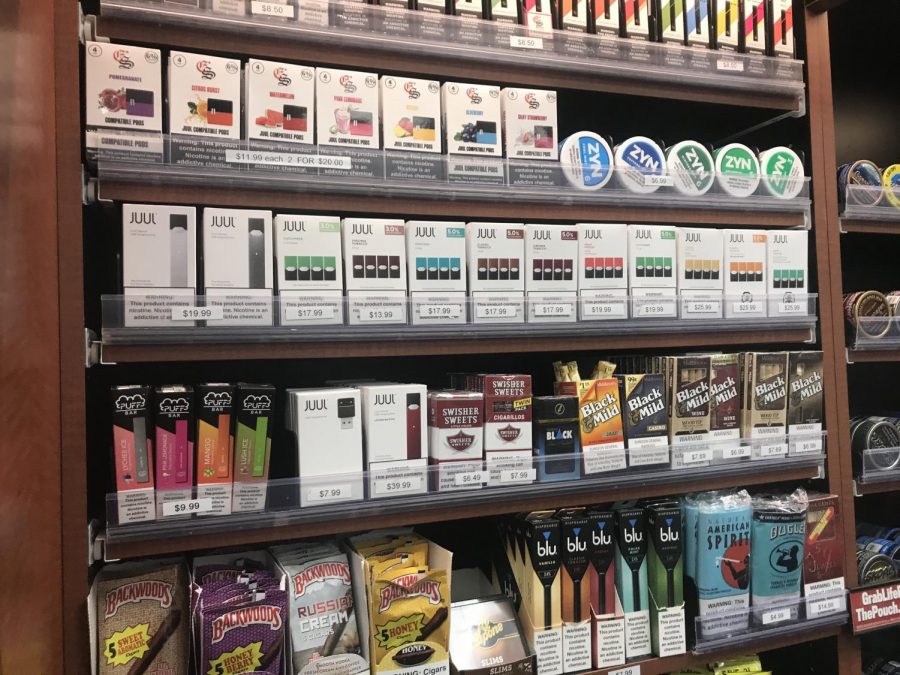 Local convenience stores are packed with various vape and tobacco products. Stores all around the state have put up signs to detail the legal age change, which will hopefully result in less underage people having access to the products. “I feel like younger kids that do it only do it to look cool, but people who started it to look cool definitely have a problem,” said a group of HB students.

On Dec. 22, I turned 18, excited that I’m finally eligible to be drafted into the next war and can legally buy tobacco products. To my surprise, though, when I walked into the convenience store for the first time as an adult, a large, laminated sheet laid below the bag of cheddar and sour cream ruffles I had just laid on the counter read: “YOU MUST BE BORN BY THIS DATE IN ORDER TO PURCHASE TOBACCO PRODUCTS (including e-cigarettes and vaping devices).” As I read the sign, my confusion grew even more after I realized it was stating that one must be older than 18 in order to buy any of the products it listed. In all honesty, I really had no intention of purchasing any of the recently-banned products that day, but that didn’t take away from my shock whatsoever.

On Dec. 20, 2019, President Donald Trump signed off on a bill that would change the federal age to purchase tobacco products to 21. However, even though the federal law has been deemed effective as of January 1, 2020, New Hampshire has not yet adopted the new rule into its own state government.

New Hampshire put its own state bill into place that was also effective immediately as of January 1, 2020, but instead of 21, the legal age to buy tobacco products was changed to 19. Many New Hampshirites have been in a state of mass confusion over which law they are required to follow. Luckily, Student Resource Officer Richard Bergeron was able to shed some light onto the situation and hopefully clear up some of the confusion.

“If you look at the RSA (Revised Statutes Annotated), which is 126-K6, it’s just changed the age to 19,” said Bergeron, “The fine is still the same, community service is still the same, so there’s really nothing that’s changed. It still has that you’re tried as an adult 12 years old and higher, so if you’re a 12 year old vaping you go to adult court.”

The RSA reads, “Any person who has not attained 19 years of age who violates this section may be guilty of a violation and shall be punished by a fine not to exceed $100 for each offense or shall be required to complete up to 20 hours of community service for each offense, or both. Where available, punishment may also include participation in an education program.”

Through all the controversy and confusion over the age change, it’s important to understand what has caused the need for change. Underage vaping has become a serious problem all over the United States, with ‘popcorn lung’ and respiratory failure sickening children as a result of the easy access to the vaping devices that result in eventual addiction and overuse. In fact, as of January 21, 2020 the CDC (Centers For Disease Control) has reported a total of 2,711 hospitalized EVALI (E-cigarette, or Vaping Associated Lung Injury) cases and sixty total deaths throughout the United States.

On a positive note, some students at HB are learning about the negative effects of vaping and are straying away from the dangerous devices. Hollis Brookline Senior Meredith Yardley ‘20 said, “They’re [students who vape] practically killing themselves, so they’re not cool when they do it. I actually get scared from those Real Cost advertisements, but I feel bad for the people who have to deal with the results of smoking and vaping.”

It’s good to see that students are realizing how bad the abuse of cigarettes, e-cigarettes, and vaping products are for their health, but for those either already addicted or don’t listen to the warning signs, will this new legal age do anything to change their minds? According to Officer Bergeron – probably not. “I don’t think so. It may help a little, but it still doesn’t stop kids from underage drinking,” said Bergeron.

One thing the bill could help prevent is the distribution of vape and other tobacco products to minors, as there are much less 19 year olds in high schools around the state than there are 18 year olds. Although this could help, Bergeron said, “When it comes to money, people get creative.” All we can hope now is that more and more people will realize how detrimental using these products is to their health, and that the bill can at the very least prevent teens from acquiring the products as well.