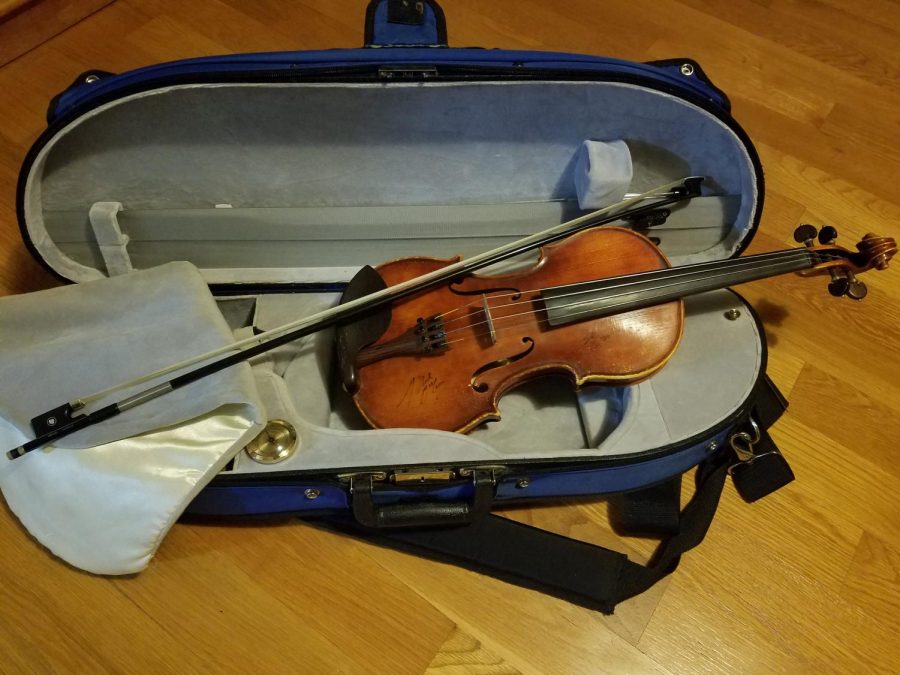 A violin sits in its case, waiting for an eager student to play it. The lack of strings-related ensembles or classes has caused many complaints among strings musicians. “Unless the kids have private teachers or are already a part of a different ensemble, it is hard to maintain playing the instrument because there is nowhere for them to play it,” said Claudia Pack ‘22.

At Hollis-Brookline High School, students have several options to pursue their musical talents and dreams by playing an instrument in either the concert or jazz ensembles, or singing in the concert or jazz choirs. Unlike students in those groups, string instrumentalists are not given the same opportunities as their counterparts with the current program of studies. String players at both the middle and high school in the community have struggled to find a home, as there are no orchestras or ensembles available to them on campus.

Starting out in both Captain Samuel Douglas Academy (CSDA) and Hollis Upper Elementary School (HUES), string players have an option to begin playing. At CSDA, the program is run by Christina Cantino, while at HUES, Deborah Jordan, a private teacher from Hollis, comes in every Tuesday, Wednesday, and Thursday morning before school to teach. These two teachers are passionate about helping young musicians succeed and provide ensembles for their beginner, intermediate and advanced string classes. These programs are in place so that students get the chance to try out instruments such as the cello, viola and violin, in addition to the traditional band instruments that the school band directors offer.

However, a lack of programs exist after graduation from the upper elementary schools. When entering middle school, aspiring strings students are left without the distinctly tailored program offered to them in their previous schools.“Strings students would benefit just as much as band kids if they had an ensemble for them during the day, just like their band or choir counterparts,” said Elisabeth Nault, the band director at the Hollis-Brookline Middle School.

She has allowed string students, predominantly violinists, to play in the band, in place of an oboe section. “But this isn’t enough [for string instrumentalists] — they’re not getting the experience that they earn playing in an orchestra,” continued Nault. It’s more beneficial for violinists to be playing in an orchestra, learning how to listen to instruments that belong in that environment, which cannot be found with band instruments. The only option to play strings in the high school  would be to play upright bass in the concert band.

“Not all string players [are able to] play another instrument or sing, so they can’t always stay invested in music,” said Claudia Pack ’22, a cellist who plays the oboe in concert band.

There are options for strings instrumentalists to play in ensembles outside of school, but they have to travel, sometimes long distances. Pack finds that could be a problem for some aspiring musicians.

“Though we have Sinfonietta in Nashua, there isn’t much of a place for students to go beyond elementary strings groups. Sinfonietta is also not the most challenging group, and students eventually grow out of it,” said Pack.

For more challenging opportunities, string players are left having  to travel to nearby cities and participate in groups, such as the Dino Anagnost Youth Symphony at the Manchester Community Music School, SNHU community symphony or even commute to the Boston Youth Symphony Orchestra. String players who cannot commit to traveling this distance have limited options and many of them end up quitting since our area lacks a convenient group to join.

Without an upper level strings program in the SAU41 district, advanced string players are disadvantaged compared to those from other districts in New Hampshire. Schools with orchestras and strings programs foster the education of violinists, violists, cellists and bassists by providing opportunities to play during school hours. At the All State Music Festival and other events alike,, more string players qualify from districts with adequate programs than from SAU41.

“Having an orchestra would allow for more opportunities for strings kids to play the music they love, but we would need to see more commitment to run an ensemble,” said Violinist Eli Rasmussen ‘20. With only the few kids currently playing string instruments, there wouldn’t be enough demand for administration to change their minds, but if more students committed or kept up with their instruments after elementary school, then a strings program may be possible in a student’s later years.

So could an orchestra or related ensemble, such as a string quartet, be offered at HBMS and HBHS? Then string students could have a music class option comparable to band and choir classes. String instrumentalists are just as talented and deserving of equal opportunity as their fellow band and choir peers. It would be beneficial for the HB community if a strings program were offered. Dedicated students who play string instruments would be happy to step up and play in these ensembles. If these talented string musicians were able to participate in ensembles that were solely dedicated to them, the HB community would see a rise in a musicianship between the band, choir and string students.