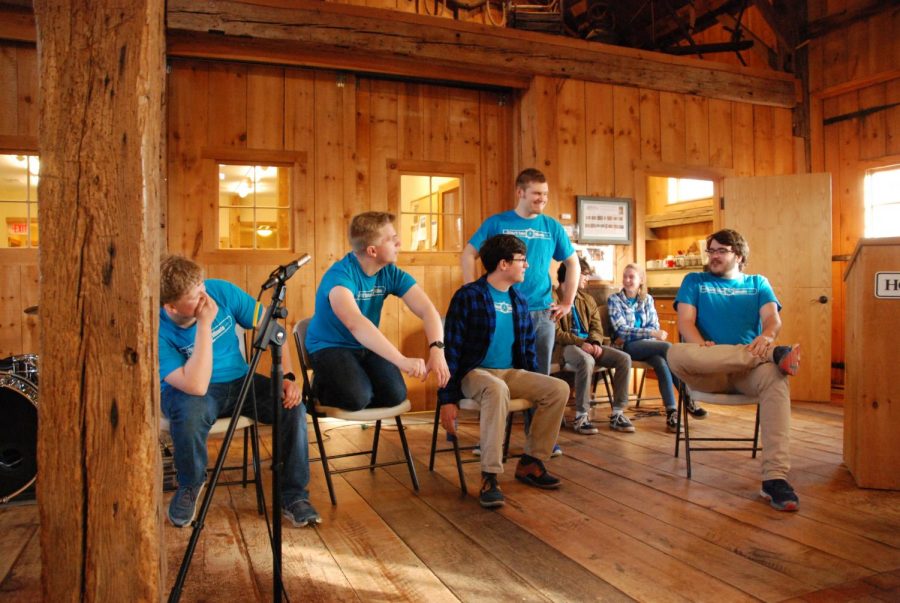 The troupe members in action at their latest performance, “This’ll Take a Minute: Frozen in Time.” They’re playing the Dating Game, a short-form improv game that requires one member to guess which character each of the other three are (in this case, from left to right, a man with mouths for eyes, a reverse t-rex, and Shrek). Performances are special for the cast and the audience alike. “I love rehearsing with everybody on a regular basis because it’s just fun, but the performances are something really special and not something that we do all that often,” said Alex Meagher ‘19.

On Saturday, Jan. 11, local improvisational theater troupe, This’ll Take a Minute, hosted their first ever televised event entitled “This’ll Take a Minute: Frozen in Time.” The show was a success, with an audience close to eighty people in attendance at Lawrence Barn in Hollis, NH. To get to where they are now, the troupe underwent a journey of self-discovery, teamwork and funny voices that began a year ago.

In May of 2019, Dylan Silcox, a former student and current theater-tech genius at HB, decided he wanted to form an improv troupe. Advertisements were made, auditions were held, the troupe was formed and rehearsals began two weeks later.

“I wanted to start the troupe because when I started improv my junior year of high school, it really allowed me to open up and sparked a lot of love for performing that I didn’t know I had in me,” said Silcox. This form of spontaneous entertainment has had a profound impact on his life; it gave him a spotlight that allowed him to, “open up and be [himself].” Silcox wanted to share that experience with others, and thus the idea for the troupe was born. He opened auditions to everyone, including students at the high school, and the troupe ended up being a mix of current and graduated students of Hollis-Brookline.

Once the troupe was formed, the next step was to find venues to perform. Silcox had connections with the Beaver Brook Association due to his membership in a previous improv troupe, Second String. This allowed him to secure multiple gigs at Beaver Brook over the summer. The troupe also performed at Hollis’ Old Homes Day and provided entertainment at some of HB’s events, including the First Lego League.

“Our Old Homes Day performance has probably been my favorite so far,” said Alex Meagher ‘19, an original member of the troupe and former student at HB. All of these gigs led up to the “Frozen in Time” improv show in January.

In between all of these gigs, the troupe held rehearsals once a week to keep their skills strong and their wits on point. The rehearsals also served to strengthen the bond between the members; even though the roster has changed a little since the troupe was first formed, with some members leaving and others joining, the group remains a cohesive unit. It was important to Silcox that the group got along well; “that was really a huge deciding factor, was who would mesh well with the troupe, because when you’re doing improv, you have to have this tight family,” said Silcox. “If people are early [to rehearsal] just so they can hang out with their friends, it makes me so happy.”

Rehearsals consist of playing improv games, and very little else. “That’s most of what we do, is just games and scenes and just doing improv, because improv is not really a thing that you can rehearse. There’s skills you can develop, which is what the rehearsals are for,” said Meagher.

The shows consist of the same thing- improv games- but with the added bonus of performing in front of a crowd. Each of the members have their own rituals to get themselves ready for the performances. Silcox likes to review an acting method called Process, to remind him that in improv, it’s less about making the joke and more about making the scene. Meagher likes to get a good night’s sleep, eat a good breakfast, and show up sharp and ready; he enjoys the warmups the troupe does before going on to bring up the energy for the show.

Just as the members have rituals, they also have favorite games to play. Meagher and Silcox both enjoy “Scenes from a Hat”, a rapid-fire game that involves the performers being given a prompt, like ‘things you could say in a job interview with your boss but not to your girlfriend’ or ‘weirdest thing to find in a box’, and allowing them to come up with responses on the fly.

Lorenzo Ochiallini ‘20, another troupe member, enjoys “Genre Replay/Director”, because “it’s a really interesting game that allows for a lot of options.” The game allows the troupe to flex their remix muscles, giving them a scene to start with and allowing the host of the game to switch up the genre of the scene. For example, the ‘director’ could instruct the actors to make their scene a western, or a sci-fi thriller.

The troupe also recently added a musical element; Alex Shutt ‘22, the troupe’s artist, introduced Silcox to the band Montgomery, Steckler and Steve, the group that now serves as the troupe’s intro band and live backing music. The band is made up of current HBHS students Miles Montgomery ‘22, Anderson Steckler ‘20 and Steven Szczeszynski ‘20. Thanks to their improvisational prowess, the troupe has been able to introduce a new game, called “Bartender”, that has all the members singing songs about their various problems- all of them made up on the spot. “I was dreading trying it until we did, and then it was a ton of fun,” said Meagher.

The troupe thus far has taught its members valuable lessons about themselves and their ability to work with their troupe-mates. “I definitely think as a performer, improv has made me reflect on my flaws,” said Ochiallini. He stated that he’s a “very in-control person” who tends to push to be in charge, but by joining improv, he’s been able to “let go of some of those impulses and let the scene develop organically without having to worry about [the outcome].”

The troupe has made a lot of progress in just under a year, and they hope to make some bigger steps in the future. As of right now, there are no big performances scheduled, as Silcox wants all of the troupe members- including himself- to focus on their schoolwork, but performances will pick up in full swing over the summer, when Silcox hopes to host more shows at Beaver Brook. Additionally, the troupe was approached recently about performing at a comedy club in Milford.

Attending a performance is a good way to support the troupe and spend an hour or two laughing with an incredibly talented group of performers who are entirely dedicated to their craft. Stay tuned for more information on future performances, and make sure to catch one!