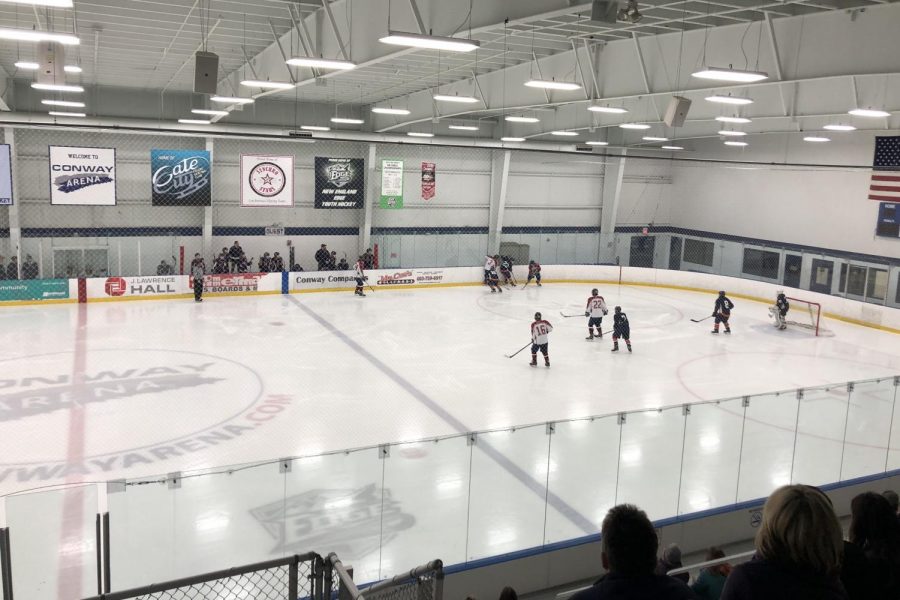 The HBDS Warriors fight for the puck in the offensive zone against the ConVal-Conant Griffins. The HBDS Warriors are off to their best start in the last ten years, carried by their high powered, high energied offensive units. “So far we’ve been pretty good, but our schedule is getting a little tougher for the second half of the season. The fans will probably see the same consistency and we’ll show just how good we are,” said assistant captain Jared Sanborn ‘20.

On Wed., Jan. 29, the 7-1-0 Hollis-Brookline Derryfield School Warriors took to the ice against the 3-4-1 ConVal-Conant Griffins at Conway Arena in Nashua in a mid-season match up.

The game began with a stretch of back and forth play between the Warriors and Griffins that didn’t involve too many opportunities for either side. After this long stretch of passing and physical play, Hollis-Brookline Sophomore Aidan Rowe fed a great breakout pass to Sal Vella ‘21 who then found Paul Vachon ‘22 in open ice where he ripped a wrist shot to the upper corner and gave HBDS the lead with 5:24 left in the first.

The physicality picked up in the second period, as bodies began to fly all over the place. As the game went deeper into the second period, the physicality began to get out of hand, as late hits continued to occur, especially from the ConVal-Conant side. Eventually the refs brought a stop to the mayhem and penalized the Griffins’ captain and number 13 on first a two minute minor for interference and then a five minute major for roughing.

“Players like him are definitely noticeable out on the ice. The kid played with a lot of intensity, which you have to look out for, but if he makes some questionable moves on our guys and wants to be selfish and take some penalties, we are more than happy to oblige and take the power play. Guys like that try to get under your skin and I think we showed great resilience by not retaliating,” said Vachon.

These penalties allowed for the Warrior’s high powered offense to up the intensity and put more pucks into the net. On their first power-play, Vachon netted his second goal of the game and tenth on the season with assists from Cole Giersch ‘21 and Aiden Rowe ‘22 with 2:24 left in the second period. Soon after, during the five-minute major, Sophomore Jake Roy misled a wrist shot past the ConVal-Conant goalie with thirty-nine seconds left in the second to cap off a beautiful display of passing between Colin MacDonald ‘21 and Aiden Chretien ‘20.

The third period started off with a bang as Nick Dapolito ‘20 stole the puck from a ConVal-Conant forward at his own blue line and finished his breakaway beautifully, showing off his blazing speed in the process. Dapolito’s fifth goal of the season put the Warriors up 4-0 with 11:20 remaining in the third period. Following Dapolito’s goal, the scoring was brought to a halt for a while as goalies on both ends of the ice made save after save. Derryfield goalie Rylen Morgan ‘21 displayed an impressive performance in just his third start of the season. Morgan is usually the backup to captain Chris Slater ‘20, but in the three games he has played this season, he’s been almost perfect. Through his three starts, Morgan has accumulated a goal against average of 0.333, with two shutouts already on the season.

In games where Slater rests, the team has most definitely taken notice of Morgan’s impressive performances this season. “I thought Rylen played pretty good for just his third start, and he had a shutout. It’s a little different because Rylen does things a little differently than Chris. Chris probably lets us know things more and it’s a lot easier in that way,” said assistant captain Jared Sanborn ‘20.

Late into the third period, Giersch put the icing on the cake after he received a pass into the offensive zone from Chretien, who then proceeded to take on what seemed like the entire ConVal-Conant team and buried a wrister to the top right corner to put the Warriors up 5-0 with just 2:10 remaining in the game.

The Warriors’ recent success has the team looking dangerous as they head deeper into their regular season. The Warriors officially sit at the number one spot in what seems to be the first time in years. Lifelong fan Jack Robinson ‘20 noted the team’s improvement over the last few years and said, “I’ve noticed that the team has been playing with more energy all around while also communicating with each other very well, which wasn’t the case in previous years.”

The support for the team is evident, as at every game the bleachers of Conway Arena are packed with HBDS supporters cheering on their team. The number one ranked Warriors have a long way to go to make a playoff run, but they have pieces to get there. “I think it’s great that we are doing so well,” said Vachon, “We have a great group of guys that come to the rink ready to put in the work and it’s paid off. As for the fans they should be expecting high-intensity games throughout the rest of the season and some great hard work out of our team. It’s great having the fans behind us each home game to make it a great environment.”

The Warriors will take on the number two ranked Berlin-Gorham team on Saturday, Feb. 8 at Conway Arena in what could be a preview of this year’s division three championship.