Are students at high achieving high schools under too much pressure to attend college? 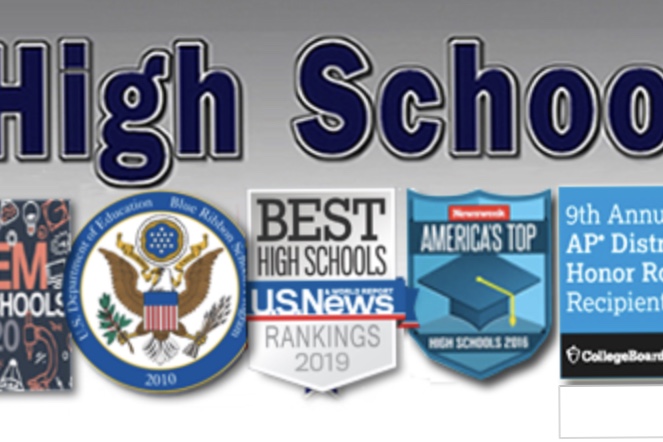 Hollis-Brookline High School is a well renowned school that successfully graduates students and sends many of them to college. HB students have endured much stress to arrive where there are, but those who didn’t keep up have been forgotten. “I wish our school would not only encourage college after high school, but just success in general because you can be successful without college,” said Jessica Hubert ‘20.

As long as I’ve been a student in the Hollis-Brookline Cooperative School District, I can’t remember a time we haven’t been ranked among the best public schools in the state of New Hampshire. Because of HB’s prestigious background as a top high school, more and more parents are moving into the two towns in order to reap the benefits of its top notch education. As a result, HB has become known as a “smart school,” and one that is filled with exceptionally intelligent, college-bound students. Of course it’s never a bad thing for a school to provide its students with a fantastic education, but has school become more about maintaining notoriety than its care for the students?

We can’t forget that students at HB have the privilege of a remarkable education, and we shouldn’t take that for granted. However, what students need to realize is that there are options other than college after high school. It is this underlying pressure to continue education beyond high school that students have on themselves to perform their best, which causes them to forget about those who don’t want to go to college.

I first recall this pressure in a horrifying memory of mine from fourth grade. It was the dreadful NWEA (NorthWest Evaluation Association) testing time of year, and I could feel the intensity of my prompters weighing on me. NWEA tests are two online, standardized tests that give students a baseline of their skill levels in both reading and math, and also determine how well students are doing at their school. The teachers gave constant reminders of “no distractions, get comfortable, and don’t go to the bathroom or stand up at all unless it’s an emergency” in order to achieve the maximum results. My problem that day began in the morning. I told my parents repeatedly that I didn’t feel well and begged them to let me stay home, but my efforts were all met with a stern, “No, you’re going to school.” Heck, I didn’t even eat my french toast sticks that morning.

Once testing time came around, my stomach was churning. About half way through the designated testing time, I had an emergency and told my teacher I was feeling ill, but I was promptly met with a “come back in five minutes if you still don’t feel well, I don’t want you to miss testing.” The issue was, I didn’t have five minutes. Soon after I returned to my seat, I made a sprinting effort to the trash can, but I was too late. Even if no one from that class remembers, I’ll still always be one of “those” kids that threw up in class.

In my opinion, the stress of perfecting our grades, and the toxic competitiveness involving them is a direct result of the expectation that we will all go to good colleges. This stigma has reeked our hallways for years, causing immense stress and frustration. Being adamant about keeping your grades up is never a bad thing, but when it begins to mess with mental health, should we relax a bit?

“An average grade at our school seems to always be an A or high B. I am fortunate enough to fall among these standards, but for those people who are not the best test takers, it really puts the pressure on them to do well. It is for sure expected of us to go to college after high school or the army,” said Senior Jessica Hubert.

Hubert is a good student, attains high grades, and is well on her way to attending a college of her choosing, but she never remembers a time when maintaining grades for college wasn’t one of her top priorities. “I guess for me, I’ve always put pressure and initiative on doing well in school and keeping my grades up,” said Hubert, “When asking people about their after high school plans my first instinct is to ask ‘where are you thinking of going for college’ rather than ‘do you plan to go to college’ because the idea of going to college after high school has been drilled into my head after going through this school system.”

Now that I’m nearing the end of high school, I’ve observed this push for academic perfection in a wider variety of instances. Most notably how the students who won’t be attending college are almost forgotten about since their top priority isn’t maintaining an honor roll transcript.

“The last time I talked to my guidance counselor was in the beginning of the school year to fix my schedule,” said Senior Jack Robinson ‘20.

Robinson is one of those few students whose plan following high school doesn’t involve attending a four year university. Robinson has instead brought it upon himself to explore other opportunities for his life after graduation. “I heard about the CTE program through my mom because where she went to high school, they had it there,” said Robinson. What’s troubling about this is that he discovered the CTE (Career and Technical Education) program through his mother, and not the school. “The CTE program is like an intro to what you want to do as a job, which is helpful to see if you actually like what you’re doing. Considering how our school barely talks about CTE programs and how other schools encourage kids to try it out, I do think other schools have way better programs,” said Robinson.

Robinson gives a prime example of how a high achieving school like HB can sometimes forget about reaching out to the students who won’t be attending college. The CTE programs offer immense opportunities for students to engage themselves in job-like atmospheres, and learn a trade or other job that will help them after high school. It is alarming that with how beneficial this program is, there is so little knowledge that it exists.

Sometimes, the stress of attending such a high achieving school can become too much. Andrew Nordstrom ‘20 decided that attending HB is too detrimental to his mental health, and made the choice to take online courses at home in order to obtain his high school diploma. Nordstrom is also one of the few students from HB that decided to forego college and follow a different career path. “I am planning on working up the ranks in my current job, to get my para certification, and hopefully have a more impactful place in my job within the next three years,” said Nordstrom.

It’s difficult to see one of your fellow classmates and close friends feel as if he can no longer attend school because of stress, and how following a path other than college has made him feel so poorly about himself. “In a way, it was very alienating,” said Nordstrom, “It’s very hard to discuss future plans with friends that don’t involve college, and it was hard to be in an environment where I was one of the only people to make the choice to not go to college. There was a sense of, ‘if you’re not getting straight A’s or honor roll, then that means you are more intellectually challenged than others. Especially so when all people talk about senior year is college.”

The most troubling issue, according to Andrew, is that he even felt pressured by the school to stay in classes, not for the benefit of himself, but for the school’s notoriety. While as a whole, he does credit the school for the help they’ve given him with personal mental health problems Nordstrom said, “There was a constant underlying tone of them, especially my guidance counselor subtly pressuring me into changing my mind. It almost made it feel like there was a third party wanting me to go to college.” Nordstrom felt as if HB’s culture of going to college and furthering one’s education was weighing on him, and played a role in his decision to no longer attend high school. HIs assumption is that the school can sometimes focus more on public perception over the individual needs of students.

Once again, students should be thankful for their privileged opportunity to go to such a good school and earn a solid education, but it’s those students who don’t want to follow this path that we should remember.  In reflection of all this, Hubert said it best, “If I’m being honest, I can’t think of anyone off the top of my head who I know for a fact isn’t going to college… maybe that says enough on its own.”

In no way am I trying to convey that attaining high grades or having high standards are a bad thing, and in no way is it my goal to put the blame on a single person or group of persons. As important as grades and college are, mental health needs to find a place where it is equally as important.

Attending college is, and likely always will be the typical path for an HB student, but it’s crucial that we provide the resources and an equal amount of attention to the students who decide not to follow suit, as well as to those who need assistance in balancing the stress of school and their mental health.