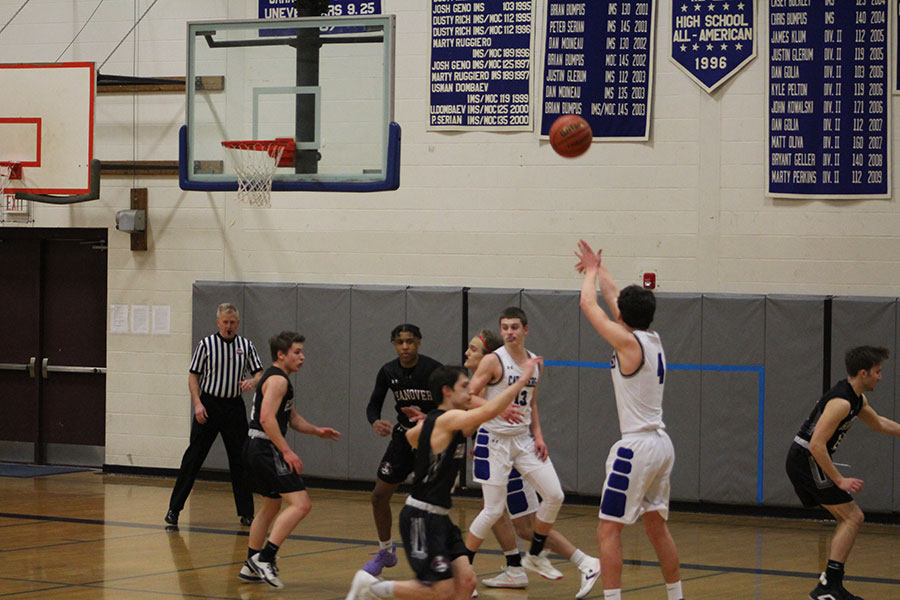 Matt Dias ‘21 at, attempting a 3-point shot against Hanover. Dias led the team in points to a victory, 70-63. “We knew going in that Hanover was probably the best shooting team we were going to play all season, so it was key that we closed out their shooters and sprinted back on defense,” said Dias.

The charge continues through the regular season for HB Boys Basketball. On February 12, 2020, the Cavaliers (13-3) handed the Hanover Marauders (15-2) their first loss of the season in a game that was close the entire length, 70-63. This win gave HB their 11th win in a row since starting out with a rough 2-3 record. The top performers were Matt Dias with 17 points, Grant Snyder with 14 points and Max Stapelfeld with 11 points.

Going into the game, the team was no stranger to tough competition in their regular season schedule. Earlier in the season, they played the current first and second place seeds, Conval and Bow. “Playing a lot of the top teams has allowed us to get a lot better because there aren’t any games that are just handed to us,” said Matt Dias ‘21, who led the team in points (17) against Hanover. Hanover is the current third place seed, and that experience against tough teams proved to be effective against the Marauders. “It’s helped show some improvement from the beginning of the season,” said head coach Cole Etten.  “It [was] just one game though, so we need to be prepared for the next one.”

With that momentum, HB once again took the win at home against Oyster River by a large gap, 69-49. Top performers were again Grant Snyder with 21 points, Max Stapelfeld with 11 points, and Dias with 9 points. “At this point, it’s all a matter of finishing,” said Henri Boudreau ‘20. “If we maintain this consistent level of improvement, then we’ll be in a good spot.” Coach Etten believes that there is still more the team can improve on. “Every game we can learn new things. We need to stay focused on the game at hand and stick to our strategy.”

As a successful team, the Cavaliers hope to be a serious threat to teams attempting to make a playoff run for the championship game.  “If our team sticks to our roles and helps each other out like we have been lately, we should make a good playoff run toward UNH this year,” said Dias in regards to the playoffs.

The finals are held at the University of New Hampshire’s very own Lundholm Stadium up in the Durham campus. Hollis Brookline is certainly no stranger to playing in Lundholm, having won the Division II Title 2 years ago against Oyster River. Dias also added that the team chemistry this year is a big factor to how HB has been performing. “The chemistry we have not only makes being on the team more enjoyable, but also helps us communicate and succeed in games. We’re not afraid to help each other out when we make mistakes, and that makes a big difference.”

HB continued to charge through their schedule and keep their win streak alive over February vacation, beating Kearsarge 69-56 and Laconia 52-49 at home, and traveled to Concord to beat Bishop Brady 66-51.

With heavy momentum, the Cavaliers kept their win streak alive on the road against Lebanon last night 51-48 improving to a 14-3 record.