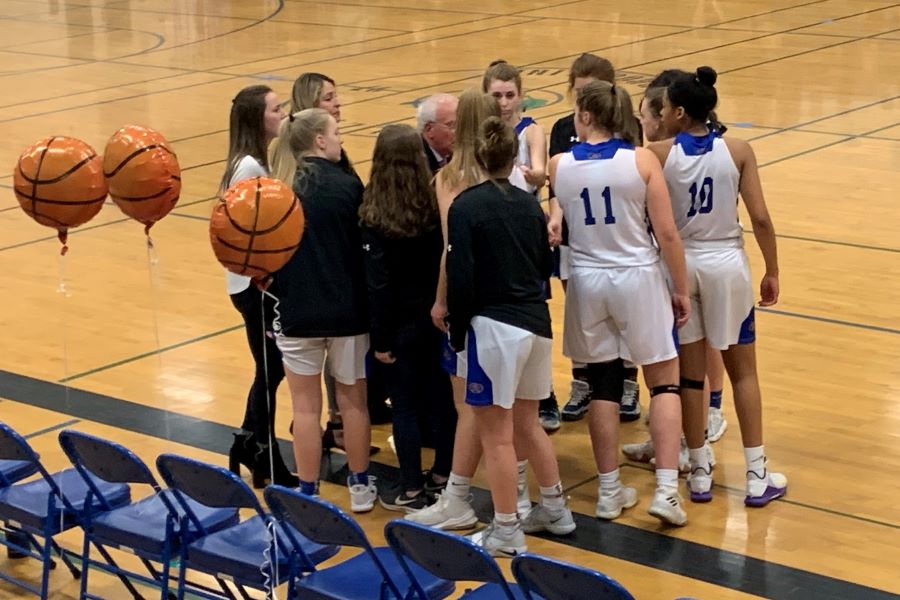 The girls team surrounds Coach Bob Murphy, reviewing their game plan. The girls need to “go in strong, playing our game, moving the ball more” said Amanda Goclowski ‘20 as they head into their game against Kearsarge.

The Hollis Brookline’s Girls Basketball team is no stranger to success. The past three years have seen three solid seasons, including a championship and a second place finish. This year is no exception. The team is currently 17-2 with dominating wins since the start of the season. They are primed to make another deep run in the playoffs this year, led by players who have been there before.

The players attribute this year’s success to the team’s overall chemistry. More than just a small roster, the team has gelled together over the course of the season. Not to mention that some of the core starters have been playing together for years, going as far back as third grade. “There’s a high level of chemistry between the starting five,” said starter and team captain Elizabeth Bonnette ‘20. “We can just make eye contact on the court and know what we want, know who wants the ball, who’s open, what plays to run,” said Bonnette.

This team chemistry has certainly helped the team, who are currently in second place with only a week left in the season, their only loss coming to 1st seeded Hanover. Even after that loss, the team still feels confident in their potential. “It’s been a good season. We’re looking strong for playoffs,” said starter and team captain Christina Balsamo ‘20. To keep their success, she said the team needs to “practice hard and keep up the intensity” while “coming ready to play and not taking any teams lightly.”

On the court, this chemistry has translated to a newfound offense. “Compared to last year, we’ve stepped it up, our ball movement, team bonding, working together is way better than last year,” said starter and team captain Amanda Goclowski ‘20. They worked together in practice to improve the overall offensive flow of the game, to a huge success. The girls are averaging an astounding 57 points per game.

However, unlike past years, the scoring is more balanced. “We have more of a diverse set of scoring; it’s more than just one person scoring,” said Goclowski. This new style of offense has helped HB push through the competition, and “team ball” has turned into personal success as well. Starters Balsamo and Elisabeth Stapelfield ‘22 find themselves on the Division II top 10 points per game scoring list, coming in at 3rd and 9th respectively.

The team is definitely ready for the playoff haul. Three current starting seniors were part of the team that won it all two years ago. “I think it pushes us all to get back to that big, final game, or as Coach Murphy says, ‘the big game’” said Goclowski. Having the experience of playing at gyms much bigger than HB, and with many more fans, plays a big part in the ability to perform on the big stage. However, with a starting core that is used to the fans and the atmosphere, HB has a legitimate chance to put up a deep playoff run.