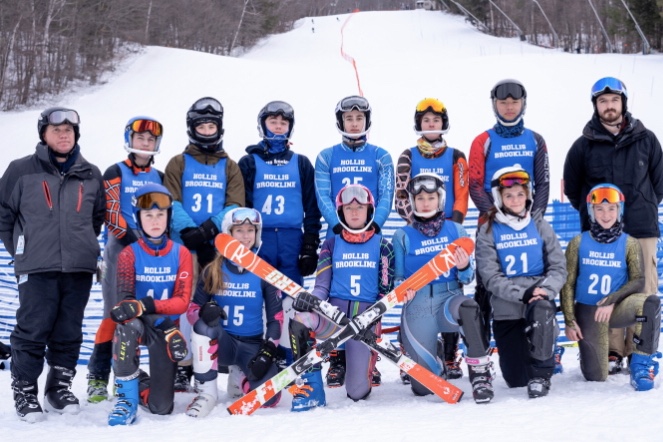 The HB skiers pose for a group picture after a race. The HB ski team practiced and raced at Crotched Mountain throughout the season, where they had a strong performance at their state meets.  “It was a great group of kids. It was a fun experience every time I went,” said Assistant Coach Milton Robinson.

During the last couple of months, the Hollis Brookline Ski Team has spent many hours on the slopes in preparation for their state meets during February 11-12.  Their hard work during the season paid off, as the girls’ team earned 11th place and the boys’ team earned 5th place against tough competition from powerhouse teams all over the state.

In most high school sports, the regular season record of each team determines whether they will qualify for the playoffs. In skiing, however, regular season races do not count towards placement in the state meet. Even though they do not count towards states, these races help the skiers to get competitive experience so that they knew what to expect going into the state meets.

In addition to their races, HB’s ski team held practices twice a week at Crotched Mountain, which was key to their preparation and overall success.  “Our team…never really did well the other seasons, but this season…we won our first race in six years,” said Benny Palmer ‘22. Palmer also explained how he prepared himself mentally. “Individually, I trained with the mindset of a race so that I was prepared for the races,” said Palmer.

Assistant Coach Milton Robinson also agreed that the team has made a lot of progress. “Some really had never raced before and were able to improve greatly throughout the season. We have both giant slalom and slalom, and they were able to improve just through the practice from the beginning of the year. It was amazing how far they came,” said Robinson.

Danny Kennedy ‘21, who took photos for the team, was impressed by the level of competition. “There were some pretty fast skiers. They were getting really close to the poles when they were going around them. Even in the photos, they were getting inches away from the poles, which is ridiculous. I don’t know how you do that. They were better than I thought they would be,” said Kennedy.

HB skied competitively against tough competition from schools up north such as Kennet and Kingswood, which are located very close to ski mountains. Many skiers from these schools do racing outside of high school as well, which puts them at an advantage. A few HB skiers race outside of school, but the majority are only high school racers, which makes their results all the more impressive. Overall, the team was very happy with their accomplishments this season. “It was a great group of kids. It was a fun experience every time I went,” said Robinson.

Through hard work and dedication, the team has made great improvements over the past few years. Most of this year’s skiers are planning on returning, so they have high expectations for the future. The HB ski team is on the rise, and they’ve proved they can compete with the best based on their strong performance this season. After a successful season, the HB ski team has put the league on notice, and they have a bright future ahead of them.

Erik, nice job with the use of the inverted pyramid writing style and with your interviews for this piece! For editing, and for the future, try to keep that 30-70 ratio in mind and you’ll be all set!