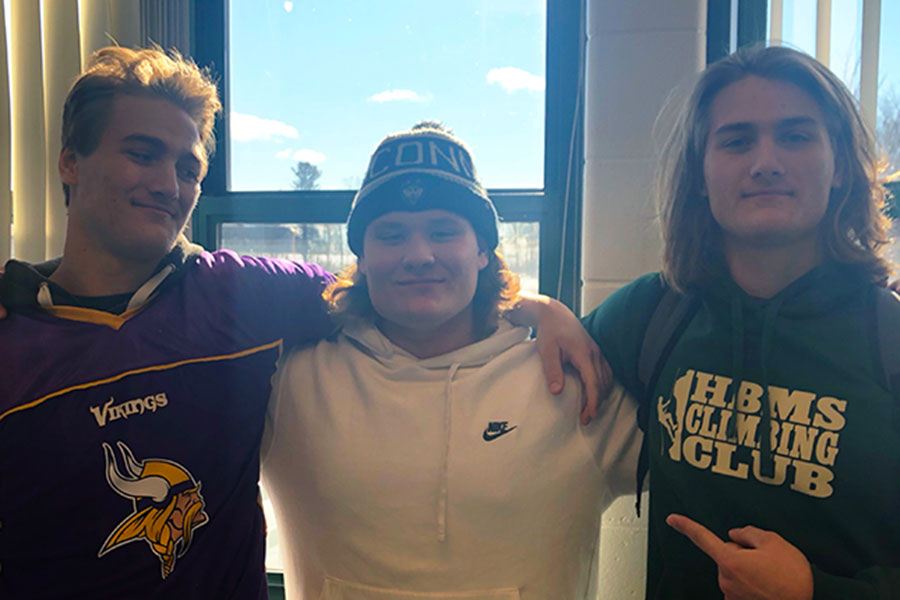 Quinten, Sander and I pose to show how we will be representing Hollis-Brookline in its efforts to support Dartmouth-Hitchcock Medical Center and its patients. The three of us will be running a fundraising page for people to provide donations to the organization. “I’m not sure how big of a role playing in the game itself has on the CHaD organization, but I know the game itself plays a major role because it donates all of the money it makes to the betterment of CHaD kids,” said Sander Wimmer ‘20. We intend to hold an event that will help raise money for the organization in the near future.

The fear of losing a child due to medical illness is something that plagues the minds of nearly every parent, and for those who face the hospitalization of their child, this fear often becomes overwhelming. Children are a symbol of hope and innocence in the world, but when they succumb to a fate burdened by sickness, that sense of hope becomes tainted.

I, along with two of my teammates on the Hollis-Brookline  football team, have been offered the opportunity to play in the CHaD All-Star game in order to help support sick children. Dartmouth-Hitchcock Medical Center has been running the Children’s Hospital at Dartmouth (CHaD) All-Star game since 2010, selecting senior players from various schools who have excelled both on and off the field to gather support for their organization. The means by which players can support the CHaD organization include personal or team fundraising pages in which all proceeds are donated to Dartmouth-Hitchcock Medical Center.

Sander Wimmer ‘20, the HB football team quarterback, as well as the Division II South Player of the Year, and his twin brother Quinten Wimmer ‘20, an All-State South wide-receiver, have joined me in my fundraising efforts  by joining the CHaD All-Star team as well.

Sander has been playing football since elementary school, and has risen to a skill-level far beyond the average player. He is often defined by his leadership and his welcoming personality, accepting all people who strive to achieve their goals through sheer perseverance. “Taking on a leadership role is something that takes dedication, perseverance, and mental strength. Not only do you have to give it your all on the field, but off of it as well, whether that’s helping out young players or cleaning up equipment after practice. You need to always be setting the example,” said Sander.

Taking on  the responsibility of  leader may be overwhelming for some, but as he has been such an important part of every football team he’s played on, this role comes naturally to him. Along with his natural leadership abilities, Sander has always had support from his brother, Quinten, spending every day alongside him to further improve his potential.

Being a twin, Quinten shares nearly all physical traits with his brother, but their personalities are where they prove more than simply identical. Quinten, over the years, has developed into someone who is outgoing in the way he interacts with friends and teammates, as well as someone who demonstrates his personal values through action. Both Sander and Quinten have been gifted with the natural ability to lead, but Quinten’s leadership is derived from the passion he shows through his expressive personality and camaraderie. This development in character has been strongly influenced by Quinten’s lengthy football career.

“Football’s a team sport. It’s not just a game. You learn your morals from it. There’s so much to learn from football outside of just the game, so, connecting with other people, comradery, and teamwork has helped me with my everyday life in school and outside of school, like with my family and friends,” said Quinten.

Connecting with others may be difficult at times, but the environment that someone is absorbed into can make that experience far less stressful and even more enjoyable. Sander, Quinten and I visited Dartmouth-Hitchcock Medical Center for an orientation into the CHaD All-Star program, where we were introduced to the medical staff, coaches and patients, as well as our teammates. As a part of Team West, our team consists of schools on the Western side of New Hampshire including Souhegan High School, Milford High School, Plymouth High School, Bow High School and various others. “It was actually a fun experience, meeting these other players. You would think that there might be a little scuffle or some side eyes; but at the end of the day, we’re all just people. We’re all just guys. It’s different on the football field, which is competitive. You don’t see them as friends. But now that we’re teammates, it’s easy to get along and it’s fun to talk about the games that we battled each other in,” said Quinten.

On the field, we see the players on the other side of the ball as nothing more than an obstacle in our path; however during my experience at the orientation, I realized that the people I once saw as faceless are truly unique. The demonstration of passion towards all aspects of human cooperation, blending with a prideful sense of individualism, proved to me that my former opponents were more similar to me than I initially thought.

Aside from making new friends and becoming familiar with the coaching staff, I, along with Sander and Quinten, were moved by the experiences that were shared by various people. “Being able to meet some of the children first hand and hear some stories from CHaD kids I’ll never forget, and impacted me greatly,” said Sander. From coaches to parents, the personal struggles with medical illness that they or their child has faced serve as a reminder that we are not alone in our efforts to cast off this burden. Reliving my family’s past struggles is something that continues to instill negative feelings in my mind, but while listening to the experiences that others have been through during the orientation, I felt this negativity shift into a sense of comfort.

My brother Nathan’s battle with cancer took a heavy toll on my whole family; yet, our hope would not fade away as a result of the growing support that we received. The Saint Anselm Football team played such a significant role during this challenging time. Their support still affects my family today, with a few of the former players still remaining in contact with us. Saint Anselm Football gave Nathan the opportunity to be listed on the team roster, let us visit the college to watch their games, continuously encouraged us to keep fighting, and even came to our house once to play basketball. “Knowing that there were a bunch of people behind me and supporting me helped me a lot with getting through everything. It helped me keep my mind off of everything that was going on,” said Nathan.

The CHaD organization has offered me  the opportunity to do for others what the Saint Anselm team once did for my family, and truly means a lot to me. Today, this game is a way for me to pay back all of those who supported my family. Sander, Quinten and I intend to give it our all both on the field and through our fundraising efforts.

You can show your support for the school and the cause on Saturday, June 29, at 6 PM at the University of New Hampshire Wildcat Stadium in Durham, NH. You can also donate to the CHaD organization on our facebook fundraising page.