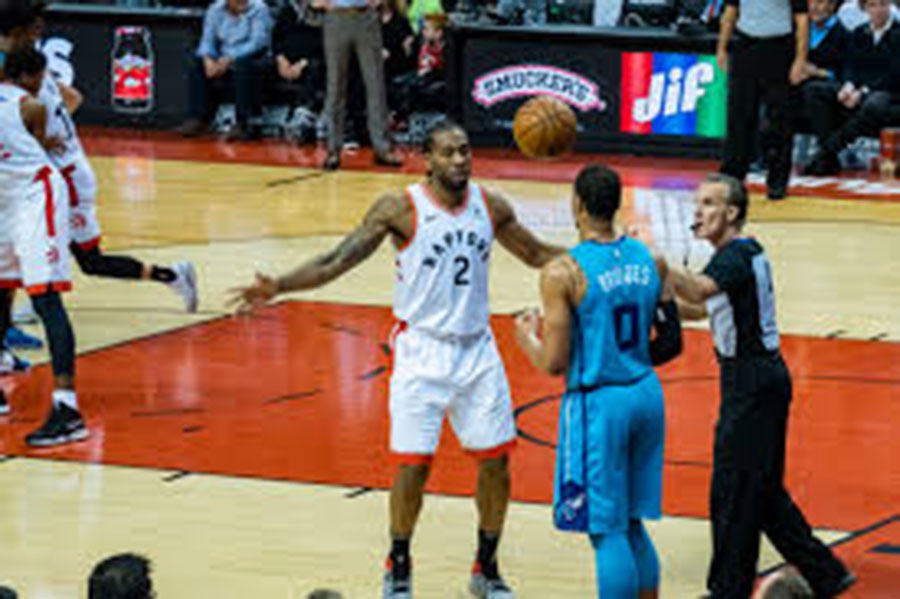 Kawhi Leonard defends the inbound pass as he leads his team to victory. The All Star game didn’t fail to disappoint as the new rules entertained all around the world, “I think that the 4th quarter of this All Star game was one of the most competitive I’ve seen in my life,” said Joey Oetjens '21.

On Sunday, Feb. 16, millions of basketball fans around the world tuned into the 69th annual NBA All-Star game. However, this year’s game was quite unlike the past 68, with the passing of NBA and Global icon Kobe Bryant in January. The NBA used this game as one of many ways to  show their respect to the NBA Legend.

When the news broke about the tragic death of NBA legend Kobe Bryant, along with his daughter and seven others, it left the sports world in shock. The NBA didn’t waste any time finding ways to honor the 18 time All-Star. They reworked the way that the game is played to show respect to Bryant and entertain the fans at the same time. “ It was a good tribute for Kobe and Gigi. Kobe was a staple of the game for many in the NBA and to lose him at such a young age when he’s just getting into the next phase of his life is horrible,” Adam Razzaboni, varsity basketball player, said.

In the past, the NBA has had problems with fans and players not being interested in the All-Star game. The high scoring pick up game has been under fire recently for the players’ lack of effort and ability to entertain fans. “ I would much rather watch a game where they [the players] are all trying, we want to see the best talent in the world compete at a high level,” said Joey Oetjens ‘21, a Chicago native and basketball fan.

The NBA has previously made attempts to help change the pace of the game, but they have fallen short. For example, two years ago the NBA introduced a new format that changed how both teams were selected. Abandoning the old East vs West format, they introduced the NBA All-Star draft where two captains are selected through fan voting, where the two captains go back and forth selecting players of their choice to join their All-Star team.  Unfortunately, this new idea still didn’t satisfy the fans, and the All-Star game fell short once again.

The new rules that the NBA put in place confused many fans at first. The rules separated the first three quarters into their own mini game, with the winners of each quarter getting to donate 100,000 dollars to the team captain’s chosen charity. But in the 4th quarter, the team who has the higher total score gets 24 points (Kobe Bryant’s old number) added to their score. That number then becomes the “target score” and the team to reach that number first would win the game. athletes all around the NBA shared their thoughts all over social media about the success of this game, its format,and  how the All-Stars competed with each other.

Athletes and fans loved the new addition to the All-Star game. The “I think that the 4th quarter of this All Star game was one of the most  competitive I’ve seen in my life,” said Oetjens.

But along with all the love, the game received some hate from fans. The game ended and was won by a game winning free throw from Lakers center Anothny Davis. Fans did not like how easily the game was won as both teams worked so hard just to lose off a free shot. “I think that they should change how the game ends. I do not think that a team should be able to win off a free throw,” siad Shaan Quereshy ‘21.

At the end of the night, Team Lebron came out on top and beat Team Giannis with a final score of 157-155, and with the athletes competing in honor of Bryant, The NBA All-Star game has never been so popular.  According to NBA.com, the All-Star game was up 8% from last year’s game. Along with the new rule change the league added, the only place to look from here is up for NBA fans.