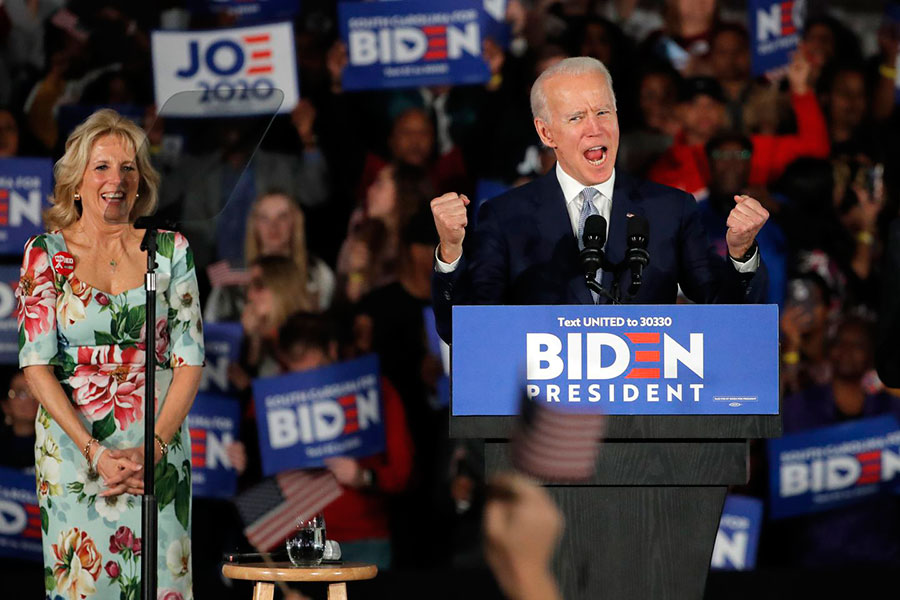 Joe Biden celebrates his Super Tuesday victories at a rally in Colombia. Biden, after defeats in the first two primaries, is now the current delegate leader. “Biden is well-liked by Black voters, moderates, and the Democratic establishment,” said Lily Coady ‘20.

The presidential race received a big shake up on Tuesday, March 3, as Joe Biden and his campaign had a surprising resurgence. Biden ended up winning 10 of the 14 states of one of the presidential race’s biggest days, also known as Super Tuesday. Biden had previously finished in a disappointing fifth place at the New Hampshire primary. Biden’s campaign abandoned taking on the Granite State to move on to South Carolina, where Biden won with 48.4% of the votes. To add to recent success, Biden won Michigan and 4 of the 6 states from Tuesday March 10, and holds a current 149 delegate lead on progressive candidate Bernie Sanders.

The current surge of Biden’s Campaign has put Vermont Senator Bernie Sanders behind in the delegate race. To some, this sudden change of lead in the delegate race was almost predictable. “I expected that the states participating would gravitate towards a moderate [candidate], and Joe Biden received the most delegates by a relatively safe margin,” said Lily Coady ‘20, the president of HBHS club, Young Dems. “I was surprised, but more disappointed, that Warren didn’t drop out of the race prior to elections. One of her leading messages is party unity, and she put the party in an uncomfortable place by staying in.” As a more progressive leaning candidate, Warren could have taken away important votes for Sanders during the Super Tuesday elections, which could have impacted the current delegate gap between the two candidates.

Many wonder why Joe Biden, who started out particularly poorly in the primaries, has a sudden large following and now a favorable chance of securing the democratic nomination. “He’s winning this electability pitch, [he’s seen] as the best candidate to defeat Donald Trump,”said economics and legal studies teacher Jamie Johannsen. “I don’t think some of his voters picked him necessarily for his policies but because he can face off against Trump.” Some voters believe that having a president with very left leaning policies can become elected against a Republican such as trump. One of Biden’s largest missions for his campaign is “a revival of decency and honesty and character,” to the U.S presidency. With the combination of that mission and his perceived moderate politics, many voters are questionable about Sanders’ policies and see Biden as a safe bet for their next president.

With all of the attention on the democratic bout between Biden and Sanders, many democratic voters wonder if either of the two will be able to defeat the current president, Donald Trump. “It’ll be interesting to see, especially about how the [Trump] administration will sustain the economy because of the Coronavirus” said Johannsen. “People might be more in favor of a change to help out the country when the virus dies down.”

The stock market has been at a steady decline, and it might be hard for the country to start recovery after COVID-19 dies down. Furthermore, Trump has been a controversial president in the eyes of democrats, with his highest approval rating being 49%.  “Many have been concerned about the impeachment trials, leading to much of his controversy,” said Jack Duval ‘21, an active follower of the Democratic primaries.

The elections do not happen until November 3, so anything is possible for the Trump administration between now and election day to strengthen the campaign.The next primary elections are scheduled for Tuesday,  March 24.