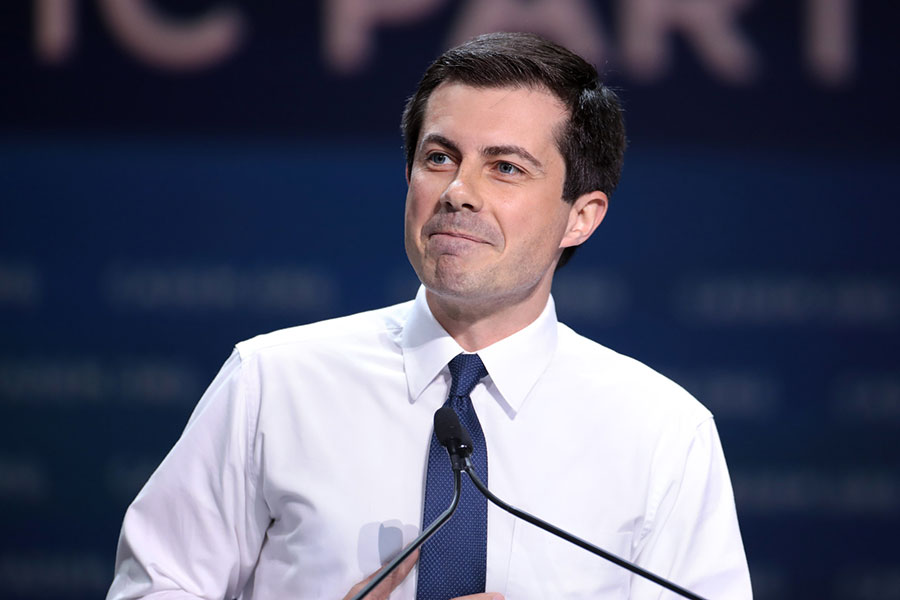 Mayor Pete Buttigieg speaks with attendees of the 2019 California Democratic Party State Convention at the George R. Moscone Convention Center in San Francisco, California. “I am a Democratic because I believe in protecting freedom, fairness, families, and the future,” said Buttigieg.

In the past few weeks, several presidential candidates of the Democratic party dropped out of the race, most notably Mayor Pete Buttigieg, Senator Elizabeth Warren, Senator Amy Klobuchar, and Mayor Michael Bloomberg. With the race down to just two contenders, Senator Bernie Sanders and former Vice President Joe Biden, many speculate about the chances former candidates had for victory, and how they have impacted the rest of the election by ending their campaigns.

Out of the candidates who discontinued their campaigns, the moderates seemed to have the most favorable prospects. Jack Duval ‘21, an aspiring law student at HB, said he was surprised Buttigieg dropped out, since he came in second in NH, and showed up pretty well in Nevada, too. Buttigieg, however, suspended his campaign just before Super Tuesday. “If I were him I would have waited until after Super Tuesday, because then there would have been more mixed results, and there definitely would have been some states in his favor, like his home state,” said Duval. While Buttigieg and Klobuchar may not have been entirely hopeless, their chances were slim, so the Democratic party pressured them to drop out to bolster Biden’s base. “I think the dropouts could have had a significant impact by staying in because more moderate candidates like Klobuchar and Buttigieg would have split the moderate vote, and Bernie would be in the lead right now,” said Noah Penasack ‘20, an active member of Young Democrats.

Penasack agrees with the notion that neither candidate was ever very promising. “[Bloomberg’s] sort of thesis for running… was that he was a better version of Biden because Biden is really old and frail, but the reality is Biden did way better than Bloomberg among moderates… his whole idea was trash.” Furthermore, Penasack states that Warren and Sanders were competing for the same vote, and Sanders simply beat her outright, perhaps due to his name recognition.

In light of the landslide victories of Biden and Sanders, some have speculated about the necessity and importance of presidential primaries. Lawrence himself stated “Bernie and Joe Biden were always going to be the last two,” and Penasack observes that the oldest and whitest candidates generally seem to have the best prospects. However, few students seemed truly keen on the idea of doing away with primaries altogether, regardless of how much time it might save. “No, it would not be beneficial to automatically choose the oldest and whitest candidate, and primaries are in fact necessary,” said Duval. Indeed, it is worth noting that with Biden and Sanders being born only a year apart, such a system would face great public scrutiny, especially considering the relative nature of whiteness.

With the primaries narrowed down to only Biden and Sanders, confident conjectures have been cast about each candidate’s prospects in the general election, none of them optimistic. Penasack believes the Democratic contestants come off as too old and frail to garner national support, and Lawrence agrees, stating “Bernie is too socialist, and Joe Biden will fall asleep.” In the months to come, the Democrats will have to decide on their nominee, but as for their odds of winning the presidency, only time will tell.