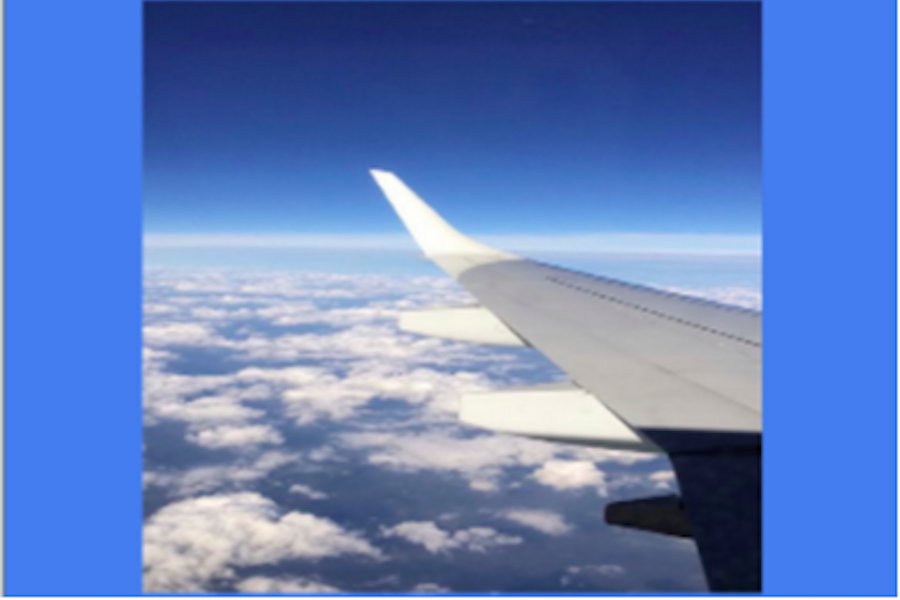 I took this photo on my flight last spring, the clouds are floating all around the plane here. During the short flight, this plane produced almost 42,000 pounds of carbon dioxide into the air that we breathe. “This is getting out of hand and things need to change,” says Teddy Moscatelli ‘21.

Every time we travel by airplane, over 50 pounds of carbon per mile are released into the earth’s atmosphere. In early January, Jetblue was the first airline ever to announce it’s reduction of these greenhouse gases during each flight, and now almost a dozen other airlines have done the same. If every airline decides to jump on this bandwagon, the amount of pollution in the air we breathe will decrease significantly, creating a much safer environment for everyone.

Jetblue airline was the first ever to propose this idea to better our environment. The airline announced their decision in January of this year, and will be a great way to decrease the pollution in the air that we breathe everyday. Jetblue hopes to accomplish this by July of 2020. While the process will take over the next 10 years, it will benefit our environment in a very positive way over time.

If we do not make this change, our planet will continue to overheat and worsen year after year. The idea of reducing the pollution that these planes cause is simple: by buying carbon offsets and creating reusable energy, the large carbon footprint can be reduced. Although the process will be long, if every airline agrees to limit their amount of greenhouse gasses, it is guaranteed that improvements will be made. Flying is the quickest and most efficient form of transportation, but on average, each airline emits about 40 million tons of carbon dioxide annually, which we breathe in everyday. If we do not come up with a solution soon, we will continue to contribute to global warming, which will have dire effects on future generations and the world as we know it.

Kim Souza ‘21 enjoys flying often, she believes that the amount of carbon released from airplanes is very harmful to all of us but she does “not think the cost of this improvement is worth the money.” In the future, Souza will not be inhibited from flying any airline, whether the carbon production has been reduced or not.

Another student, Teddy Moscatelli ‘21, is very concerned and strongly agrees with the decision these airlines have made, no matter the cost. He worries that if an alternative solution is not created soon, our earth will face the terrible consequences in upcoming years. Teddy wants the best for our environment and added that he “isn’t just scared that our lives will be affected, I know they will be affected.” about what our planet may look like in a few decades.

Whether it is believed that limiting these harmful chemicals is worth the price, airplanes are very useful to us and we should try to make them more environmentally friendly. Environmental science teacher, Jennifer Shreves, believes the pollution created from airplanes does in fact contribute to climate change. Our oxygen intake is limited every time carbon dioxide is released into the air during a flight, these gases are only safe to breathe in small amounts at a time. Our atmosphere will ultimately be poorly affected over the next few years because “the greenhouse gasses act like a blanket, holding in the heat on the earth,” said Shreves.

Every airline should consider making this change in the near future in order to protect the earth that we live on.