Live From The Montgomery Basement 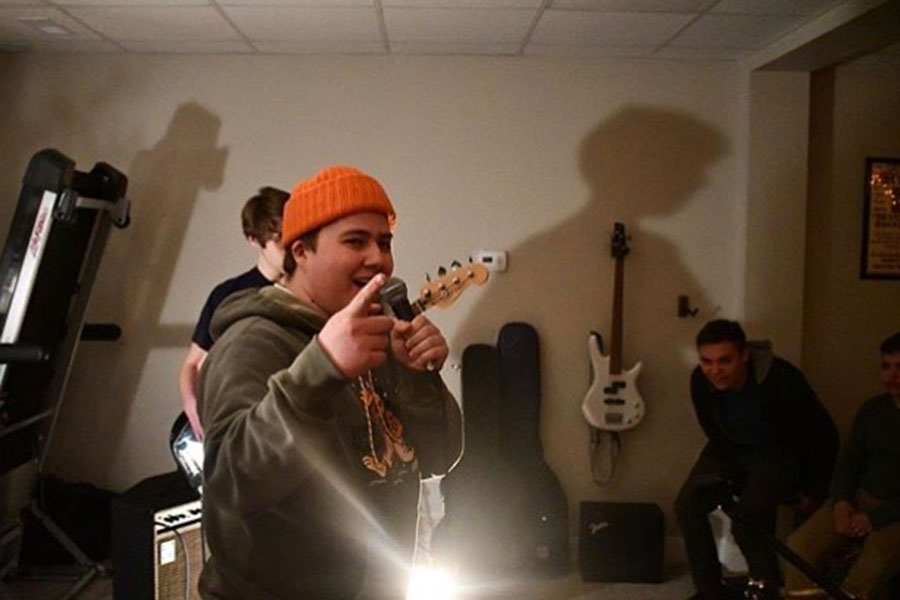 “Miles is an amazing drummer, and has only grown since we first started playing music together. He started off really good and has only become better from then, and he is just looking to become an even greater drummer everyday,” said Spencer Murray ‘21.

On Friday, Feb. 21, Miles Montgomery ‘22, Anderson Steckler ‘20, Steven Szczeszynski ‘20 and friends hosted a concert in Montgomery’s basement. The band advertised across social media platforms, inviting any Hollis-Brookline student to enjoy a groovy night of listening to live music with friends.

Montgomery and his band performed a full nine-song set list with two of them featuring Spencer Murray ‘21 on bass and saxophone with Noah Sinclair on trumpet. “It feels really good to be able to play with my friends, especially since they are all so talented. I’m very fortunate that I can perform with such a talented group of people,” said Montgomery. Montgomery is the band’s drummer and has been playing since the age of six. “[The drums] just sparked an interest for me and I’ve just stuck with it since then,” said Montgomery.

The quaint basement in Hollis was filled with students from ninth through twelfth grade who watched and listened to their fellow classmates perform. “I recommend that everyone should see the band play; it’s a fun thing to experience as a whole group of friends to watch your classmates perform,” said Murray. Murray has played saxophone since the fourth grade, and started playing bass his sophomore year after being encouraged by fellow bandmate, Anderson Steckler.

Among the many guests was an ever-so talented  singer, Ian Mcnabb ‘20. Mcnabb broke out into song, performing his legendary Guitar Night solo, Smash Mouth’s “All Star.” “‘All Star’ was great. It really felt like we had a good vibe going on, and the song has really become an emotional thing for me, and I’m really happy I got to perform it with my guys,” said Mcnabb. He has performed in a few of HB’sGuitar Nights alongside some of the group’s members.

On Friday, March 13, the Montgomery, Steckler and Steve band held yet another performance. This show was once again held in the Montgomery basement at nine o’clock without admission charges. “In a heartbeat, I would attend another [performance],” said Mcnabb.

This Montgomery, Steckler and Steve event was not their first performance. “We all mostly started playing together through Jazz Band and past Guitar Nights and just have continued to perform together since,” said Montgomery. All of the band members, including friends Spencer Murray and Noah Sinclair, partake in the Hollis-Brookline  Jazz Band.

Montgomery, Steckler and Steve among the many friends who have been featured in their shows plan to perform in our school’s upcoming spring Guitar Night. Future pop-up events can be found on the band’s official Instagram account, @montgomerystecklerandsteve.