How musical artists, athletes and celebrities are staying occupied while indoors 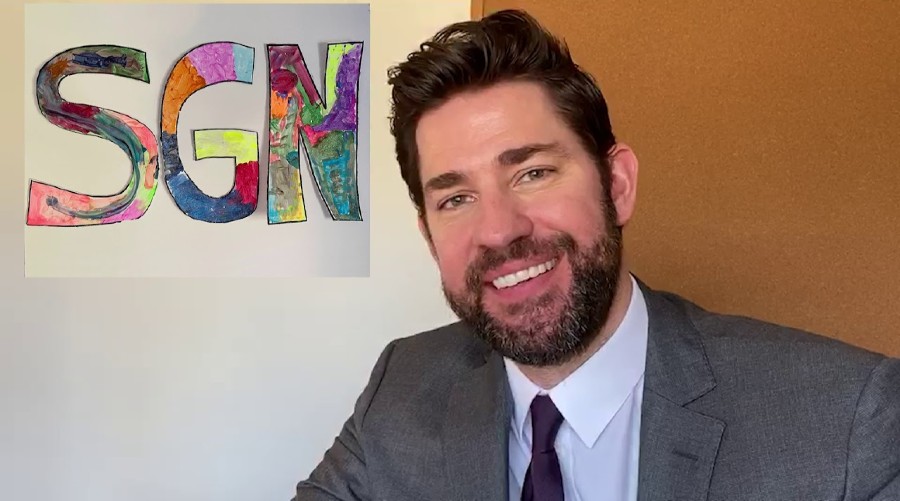 John Krasinski at home debuting his show Some Good News. He has done two episodes, each one talking about the positive side of the news during the Coronavirus outbreak. “It’s a nice break from the bad news going on all the time during the Pandemic”, said Annie Hazelton ‘21.

Across the country and the entire planet, COVID-19 has brought our normal lives to a screeching halt. Almost all public events have been postponed or canceled for the foreseeable future, and the population have been forced to stay at home to help slow the spread of the disease. Many people are faced with boredom while in the confinements of their own homes. Luckily for them, many entertainers and athletes alike are using new methods to deliver their talents and cater to their fan bases off the court, field or stage.

While artists and bands currently can’t do live shows and concerts at large, crowded venues, many are taking advantage of the technology that is available to them by live streaming themselves playing their music. “Every Tuesday Phish Streams a live Show and every Saturday Dead and Company streams”, said Josh Parr ‘21, an active follower of the two bands. Dead and Company, a band consisting of former Grateful Dead members and new players like John Mayer, can’t play together due to the stay-at-home orders to prevent the spread of the virus. They are offering their fans live streams of their older shows that are usually pay-per-view. “They do this because they understand what their communities and fans are going through, and to try to give them something to do or watch left out,” said Parr. “I’m glad I can be a part of their shows”.

In another community, athletes are also figuring out new ways to entertain sports fans  who long for their respective favorite teams to play again. One way sports leagues are doing this is by tapping into the video game community. “Baseball players are going to start playing each other in [the video game] MLB the Show for the fans,” said Jake Webb ‘20, a fan of the MLB. “I watched the first tournament where four actual baseball players played each other and I loved it”. Now, the MLB has one member of every team in the league representing their team in “The Show League” to keep baseball fans engaged. This alternative route gives fans a platform to watch their favorite teams, even if it means watching a stream.

A beloved celebrity has also stepped up to provide entertainment for the public. With the world full of haunting news about the spreading pandemic, former The Office actor John Krasinski has started his own show on YouTube called Some Good News dedicated to spreading positivity still alive in the world. “The show itself is heartwarming and John Krasinski does a great job as the host”, said Annie Hazelton ‘21, who has watched the two episodes that have been released. “In the first episode he interviewed Steve Carrell, who played Michael Scott in The Office. It was really nice seeing them both having a normal conversation as friends,” said Hazelton. In the second episode, Kraninski had a surprise online performance from the original cast of Hamilton the musical for a girl who missed the performance due to the Coronavirus outbreak.

With the world in a situation unlike any other, it is nice to see what alternatives entertainers and sports teams are taking advantage of while indoors. They give people a break from the overwhelming situation that the population has been put in.