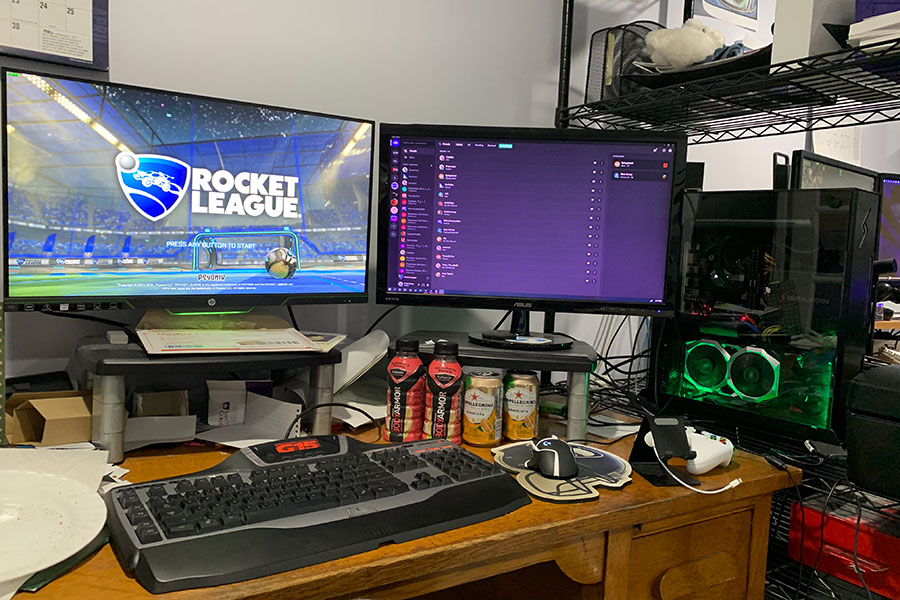 Aaron Lawrence shows off his extravagant gaming setup before digging into his daily dose of Rocket League. Though Aaron participates in many different online games, Rocket League has been a mainstay for him since he bought it. “I assume most people are cranking up the gaming time right now,” said Lawrence.

Teens across the United States have now been trapped indoors for several weeks. They are unable to hang out with friends, go to restaurants or even go out in public at all, but they still have to contend with the drudgery of their schoolwork. With very few options left to pass the time, many kids have turned to video games for entertainment.

Video games have always been a great way to relax and enjoy oneself, and in light of the pandemic, today’s teens have almost limitless time to play. “There’s probably been a 200% increase in my gaming rampage as of late,” said Arjun Senthil ‘20, a student at HB who was not comfortable sharing an exact number of hours. Even with his usual activities of board games and sports off the table, Senthil was getting through quarantine quite well, until he was banned from his favorite game for two weeks. Now, with no substitutes for his usual pastimes, Senthil longs more than ever for the quarantine to end. “I really wanna play soccer, but people have too many aids to play soccer! Also, board gaming is my life, but I can’t even play board games with corona going around!”

Senthil has a few friends who are also upping their video game time in light of the quarantine, namely Aaron Lawrence ‘20, an avid Minecraft player who says his thirst for gamer glory cannot be quenched. Before the quarantine, Lawrence played an average of five hours a day on weekdays, and up to nine hours on weekends. “Now, I play a solid 10 hours a day when I’m not working. My rate of gaming was already near maximum to begin with, so the quarantine hasn’t had that big of an effect on it,”said Lawrence. Some have argued that teens should find other ways to entertain themselves during this extended period of isolation, but Lawrence disagrees: “there are probably other activities I could choose to engage in, like scrolling through my phone, or using snapchat, but I choose not to.” Teens’ options for entertainment are extremely limited right now, so it’s not fair to chastise them for over indulging in video games.

Unfortunately for some students, remote learning has proved to be a major hassle, hampering free time that could otherwise be used for gaming. Oliver Hugh ‘21, a prominent member of the school robotics team, has had upwards of 13 hours of work each school day. Though he is not the most zealous gamer on the block, he believes he might play more if it weren’t for his immense workload. “I’d rather be doing anything besides schoolwork, so in a way, it does cut into my potential gaming hours,” said Hugh. While Hugh himself is no esports athlete, he concedes that right now, video games are of great use to our society. “We’re all kind of stuck in our houses, so at least it keeps people inside and amused. There can be benefits to playing games too, like improved hand eye coordination and reflexes.”

Through video games, teens like Hugh, Lawrence, and Senthil have managed to keep their sanity in these trying times, and hopefully, these beloved electronics will continue to keep our generation content until quaratine’s end.