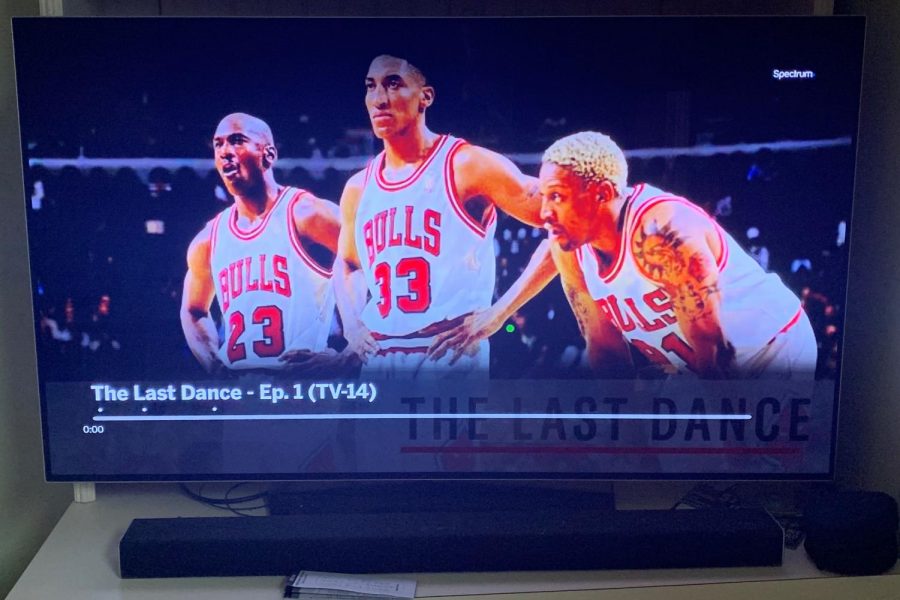 In a world currently devoid of sports, a familiar hero strikes again. Whether you know him from his incredible basketball career, his mediocre baseball stint, or an interesting acting career, Michael “Air” Jordan is a name famously known around the world.

Seventeen years after retiring from basketball for the last time, ESPN announced a 10 part documentary series titled “The Last Dance” following Jordan’s career releasing from April 19 to May 18. For many sports fans around the world, “The Last Dance” is the sports action they need, even if it is a decades-old story. The release of the first two episodes attracted millions of viewers making it ESPN’s most-viewed original content (WTOP News).

While primarily focused on Jordan’s career, the documentary also follows the stories of some of his influential teammates including Scottie Pippen and Dennis Rodman, ultimately culminating in their final season. Following a disagreement between General Manager Jerry Krause and head coach Phil Jackson, it was revealed that the 1998 season would be Jackson’s last coaching the Bulls team that he had led to five past championships. This season was aptly dubbed the Last Dance during the preseason by players and fans alike.

Reviews for the Last Dance prove that both fans and critics are loving the documentary, reliving Jordan’s greatness. CNN Senior Media and Entertainment writer Brian Lowery said “To those who recall what it meant to “Be like Mike”, “The Last Dance” is an intoxicating trip into the way-back machine,” (CNN.com). Reliving the life and career of one of the most successful athletes to walk the earth reminds us that Jordan was, as Chicago Sportswriter Michael Wilbon says, “on par with Babe Ruth and Muhammad Ali. That’s it.”

However, not everyone is happy with “The Last Dance”. Long time filmmaker Ken Burns, known most famously for his documentaries, has a bone to pick with the process as well as Jordan’s association with the series. “If you are there influencing the very fact of it [the documentary] getting made it means that certain aspects that you don’t necessarily want in aren’t going to be in, period.” he says to the Wall Street Journal. “That’s not the way you do good journalism… and it’s certainly not the way you do good history.” Burns’ criticism rings true. Jordan gives his last word throughout the series, including the “Bad Boy” Piston’s walk-off following the Bulls Eastern Conference Finals sweep in 1991. Jordan’s ability to dictate the documentary remains the main reason Kun Burns has refused to watch the series.

Whether you were a fan of Jordan growing up, a sports fan in general, or just needing some distraction during quarantine, “The Last Dance” relieves Jordan’s legacy, filled with the success, failure, and controversy surrounding the Bulls team. Episodes 7 and 8 will air on Sunday, May 9 on ESPN at 8:00 pm and 9:00 pm respectively, and past episodes can be found at ESPN.com or the ESPN app.