The 2020 NFL Draft: Hope for players, hope for football, hope for humanity 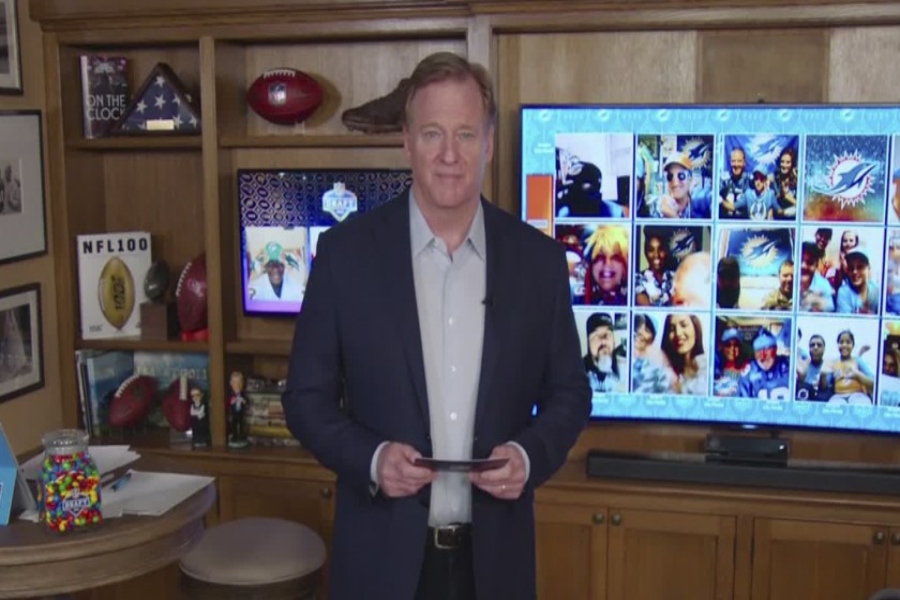 Goodell in his own home, presenting each team’s draft pick while interacting with fans digitally. This is the first time a draft for any major sporting event has been held virtually and with cameras into each player’s homes when drafted. “I watch the draft every year with my friends, and even if it was just a FaceTime it was nice to feel like everything was almost usual again”, said Joey Oetjens ‘21.

Annually in the NFL offseason, players, their families, and dedicated fans all gather in various cities in a large meeting hall to see what lies in the future for the nation’s most promising athletes. Players from colleges across the nation wait anxiously to hear their name called and witness their lives change forever. This year, however, they would not get to shake commissioner Roger Goodell’s hand and pose for a picture. Due to the Coronavirus outbreak, the NFL draft went virtual this year, as Goodell instead read the draft cards in a lounge chair from his basement, and draftees and their families embraced in the comfort of their living rooms. This didn’t take away any meaning from the draft, however. Instead, it brought the sport’s world together in a time when everyone needs hope for the future.

In terms of national viewers, the draft brought in a peak 19.6 million viewers for the first round of the draft. This surpassed any other NFL draft in terms of viewers by 37 percent, and surpassed both the world series and NBA finals in viewers. “I feel like this year’s draft was particularly special because it was the only thing happening in sports,” said Joey Oetjens ‘21, an active follower of the NFL who watched the draft on April 23. As Oetjens said, the draft was the only live sports event possible of happening due to all other sports being postponed for the near future. Since the draft itself is more of a passive sports event, the NFL acted quickly and coordinated the event within the stay-at-home requests by state.  “The fact that the NFL could pull off such a large scale even completely virtually is really impressive.” Because of the large view count and attention from the sports world, the draft proved to be much more important than solely the football world.

This year’s draft had no shortage of talent either, and had larger anticipation of stars than recent years.“The draft this year was special compared to its last years because it was a great class full of many wide receivers and talented quarterbacks,” said John Cadario ‘20, who was interested to see what teams these players would go to. The 2021 draft class had prospects with large attention for the past couple of years, like Alabama star Tua Tagovailoa, who won a national championship with Alabama in 2018 and most recent Heisman winner Joe Burrow from LSU. Because the draft received more attention than years past, it puts more attention on these new athletes that will enter the NFL in the fall.

The largest impact of the draft separating itself from previous years was the hope it gave to viewers across the nation for a return to normal in the near future. Following the current guidelines of staying in quarantine to stop the pandemic issue as soon as possible. “Humanity should be considering what life will be like, whether this ends soon or not,” said Charlie Hale ‘23, who reflected on the efficiency of the virtual draft during these times. Why risk the sicknesses or possible deaths of traveling every day for so many Americans, when a virtual draft, meeting, classroom, or get together can reach similar goals?” By continuing to follow in the example of these guidelines like the NFL did with the draft, normalities can return to our lives sooner rather than later.

The 2020 NFL draft was held with a different structure that had not been seen before. But it proved to the American people that soon we can sit down and enjoy a football game, and watch future stars shine in the light of primetime coverage. With a more powerful message beyond the game of football, the 2020 draft showed the millions of viewers that we can make it through these times and return to a normal world where fans can watch their teams compete.