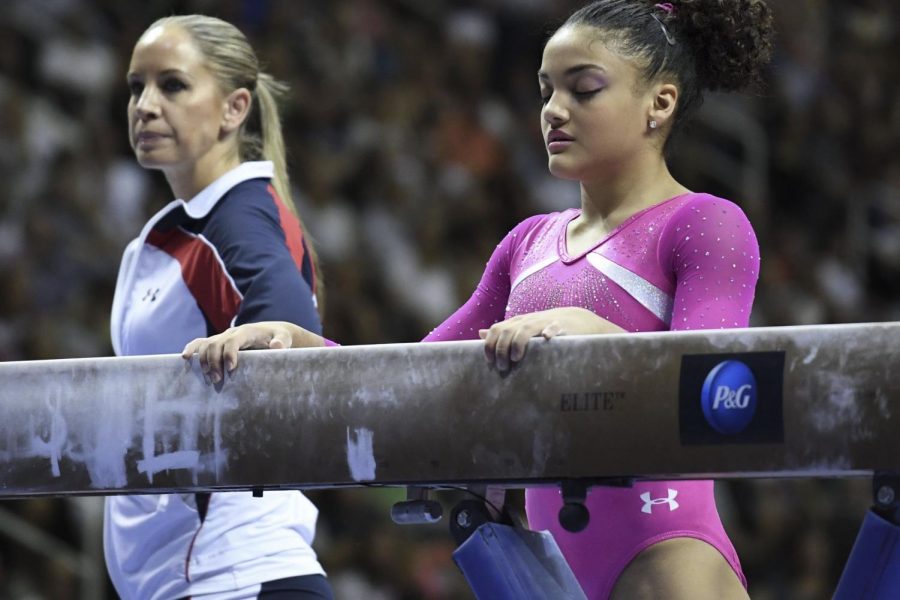 Laurie Hernandez prepares to begin her beam routine during the women's gymnastics U.S. Olympic team trials in July of 2016. Her former coach Maggie Haney stands behind her. “I thought they were just going to try to sweep it under the rug, but, wow, they did the right thing. I can’t believe they actually did the right thing,” said Hernandez, speaking about USAG.

USA Gymnastics recently suspended New Jersey-based gymnastics coach Maggie Haney for eight years after many allegations of verbal and emotional abuse. This comes two years after USAG filed for bankruptcy following the Larry Nassar scandal. USAG has been under fire for quite some time relating to the environment in which the athletes are being trained in. Four out of five members of the 2016 Gold medal-winning USA gymnastics team have confirmed some kind of abuse from someone working under the title of USA gymnastics.

Most recently, Gold Medalist Laurie Hernandez described the emotional abuse she suffered from Coach Maggie Haney. She told the New York Times, she wasn’t even sure it was really happening for a while. She kept it a secret from her family due to past experiences when they would confront Haney and she would take any complaints out on the gymnasts. “The toughest part about it was that there were no bruises or marks to show that it was real, it was all just so twisted that I thought it couldn’t be real,” said Hernandez.

Hernandez’s mother reported Haney after the 2016 Rio Olympics when she overheard Laurie and a friend discussing an incident that occurred in the gym. From there, Laurie told her mother everything. It took USAG four years to finalize the punishment that came just last week. They admitted that the process needs to be faster in the future.

This scandal comes only a few years after USA Gymnastics doctor Larry Nassar was convicted of sexually abusing over 300 victims. Nassar worked for USAG for 30 years before being arrested in 2016, despite the fact that there reports of allegation about his abuse dating back to at least 1997. A Vox article on the subject stated, “The [Indianapolis] Star discovered a pattern of coaches and others failing to report sex abuse to authorities and later uncovered more than 360 cases spanning 20 years in which gymnasts accused coaches of sexual misconduct.”

USAG has proven to have problematic reactions to allegations of abuse of any kind. “USA Gymnastics and the USOC’s failure to fully understand and rectify the wrongs done to these women on their watch shows they have not really turned over a new leaf at all. The recent plan is simply another public move by USAG to try to adjust the public perception of the sport and the governing body. When in reality, if you pull back the curtain, the cultural problems in the sport persist and remain largely unaddressed, problems that allowed Nassar to abuse young girls for decades. For example, Safesport remains underfunded, survivors remain outside the circle of decision making, and both the process and timeframe for investigating allegations of abuse, remain grossly inadequate,” said Attorney Michelle Simpson Tugel, who represented dozens of the victims of Nassar’s abuse

Both of these cases prove that the environment in which the gymnasts are in has great room for improvement and any allegations of abuse should be resolved at a much faster rate. Gymnasts should be able to thrive in a safe environment and compete in a sport they love without being compromised by abuse.